Just How Welcome Are ‘Foreigners’ on Japanese Trains? 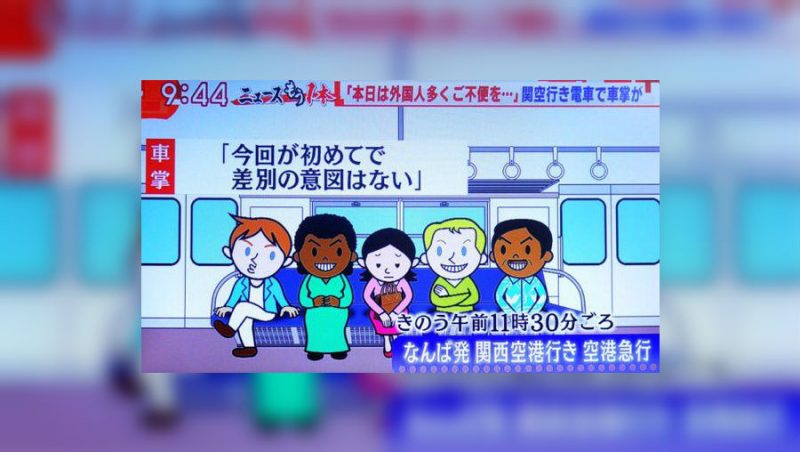 Nankai conductor apologizes for the presence of “foreigners” on a commuter train. The main caption reads, “This was the first time this has happened and was not intended to be discriminatory.” Image widely shared on social media.

Earlier in October, a private railway company in western Japan came under fire after one its employees apologized for the presence of “foreigners” on a train. The incident was widely reported in Japanese media, providing insights about how non-Japanese residents and visitors are perceived.

According to the Japanese news agency Kyodo, a conductor on a Nankai Electric Railway train traveling from downtown Osaka to Kansai International airport apologized in Japanese over the train's intercom about the number of “foreigners” on the train.

Later, a Japanese passenger reportedly complained about the incident to Nankai. The company then made a public apology and reprimanded the train conductor.

The incident was widely discussed on social media and in the mainstream media. While some were upset with the announcement itself, others were taken aback with how the media reported on the incident.

One Twitter user was on the train when the incident took place, and may be the one responsible for attracting the public's attention.

I'm on the Nankai express train bound for Kansai International Airport, and I just heard announcement (over the intercom) say, “We would like to offer an apology to all of our Japanese passengers.”

“What could it be?” I wondered to myself.

“Since there are large numbers of “gaijin” (he didn't use a more polite word for “foreigners,” but said “gaijin”) we would like to sincerely apologize to everyone for the inconvenience.”

I felt really angry since I couldn't figure out what the announcement was intended to communicate.

I've just emailed Nankai with a question (about the announcement). I've also stated that I expect them to reply. When I get off the train I'm going to lodge a complaint.

She then learned that the conductor made the announcement “after he heard a Japanese rider say in a loud voice, ‘There are too many foreigners and they are annoying.'”

A friend, who phoned in a complaint on my behalf has given me an update. The conductor explained that he made the announcement after observing a Japanese passenger gripe that suitcases and luggage brought on the carriage by (presumably) foreign tourists were “in the way.”

Nankai said that both the employee and the company itself would see to it that such an announcement would never happen again.

I'm really thankful there was such a prompt response.

The incident didn't stop with the apology by Nankai Railway. The Japanese media's handling of this story also provoked discussions online.

When reporting on the incident, Morning Show, a daily cable program, used rather unflattering images of “foreigners” in its graphic. In those images (see the featured image above), the mountains of luggage that sparked the incident were nowhere to be seen. Instead, a lone Japanese woman is surrounded on the train by several evil-looking foreigners.

The Morning Show commentators, one of whom is Hatori Shin'ichi, a “shock jock” personality who has made controversial comments about ethnic Koreans in the past, also seemed to reinforce negative stereotypes about “foreigners on trains.”

#Morning Show Even if you don't think the two presenters on the show were making all sorts of assumptions and conjecture by remarking that “foreigners are noisy on trains,” the real issue here is that the graphic [used in the TV spot] is just plain wrong.

The reason why the graphic used on the Morning Show program is so bad is because:

1) It appears as though a lone, timid Japanese person is being surrounded by a gang of arrogant, smirking non-Japanese.

2) By stressing in the graphic that there was “no discrimination intended,” it gives the impression that there was nothing really wrong with the announcement in the first place.

Part of the problem may be that Japanese trains and public transport are not meant to transport suitcases and luggage (in Japan, when traveling, luggage is customarily shipped ahead, and is not brought on commuter trains).

One Japanese resident of Yokohama noted:

I live along the Keisei Line [that travels between downtown Tokyo and Narita International Airport], and there are times when the train carriage is full of suitcases. Even though it makes no sense in terms of logistics (LOL), why call (foreign tourists) “noisy” (as Hatori did)? Maybe these tourists are just enjoying themselves in Japan. People who think these tourists are in the way and are inconveniencing Japanese tourists should all go and take a relaxing bath at a hot spring.

Back in Osaka, Nankai operates express rail service from downtown Osaka to Kansai International Airport. While Nankai offers special express service for the 50-kilometer trip, some travelers may choose to save a little money by taking a cheaper and slightly slower commuter service.

Depending on the time of day, the commuter trains can become quite crowded, and there is no room to stow bulky suitcase and other luggage. This can be perceived as an inconvenience for regular commuters.

Commenting online, some non-Japanese residents of Japan seemed to understand that the incident may not necessarily reflect the attitude Nankai Railway holds towards its non-Japanese passengers.

[…] I suspect the train driver was only trying to appease the one guy who complained and it probably never occurred to him that it would be offensive. […]

Many long-term foreign residents in Japan have talked about the “microaggression” of having no one sit next to them on the train.

One non-Japanese resident of Japan appears to have cracked the code of how to persuade Japanese people to sit next to them on the train:

Japanese people sat next to me on the train! The gaijin fear radius is gone! The cure? Read a Japanese magazine! pic.twitter.com/P9nyjBEeog

In any event, Japanese people are going to have to adjust to more non-Japanese passengers on the train. According to the Japan National Tourist Organization, the estimated number of international travelers to Japan in August reached to 2.05 million (a +12.8-percent increase from August 2015), exceeding 2 million for the second successive month.