Kyrgyzstan Is to Kok-Boru What Brazil Is to Football 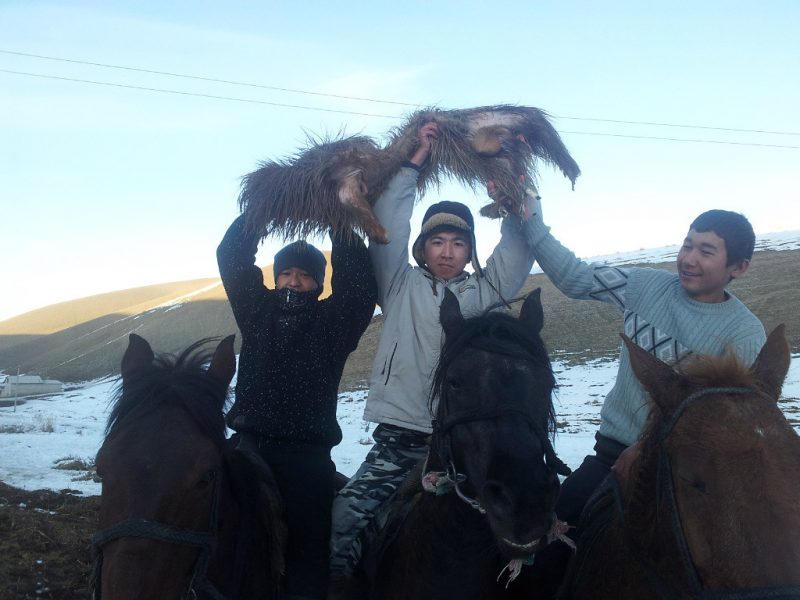 With their national team having won the World Cup no fewer than five times, Brazil has grown accustomed to thinking of football's most important trophy as their own treasured property, occasionally and reluctantly loaned out to other countries such as Germany, France, Spain and Italy.
But there's another country that exerts an even more overwhelming domination over a single sport: the ex-Soviet republic of Kyrgyzstan, which has ruled the international Kok-Boru scene for years.
Kok-Boru, played with a goat's carcass, is commonly likened to polo. In the final of the Kok-Boru tournament in the 2016 World Nomad Games, which took place in Kyrgyzstan, the host nation faced its stiffest test to date, from the national team of neighbouring Kazakhstan, where there is also a rich tradition of equestrian contact sports. 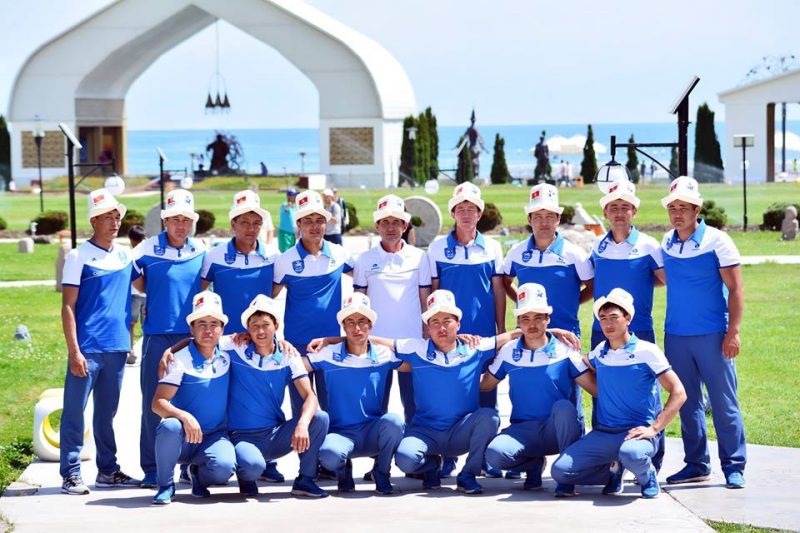 Kazakhstan did not send a team to the 2014 edition of the games, in which Kyrgyzstan's A-team and B-team, after comfortably eliminating teams from countries such as China, the Russian republic of Altai and Tajikistan, ended up facing each other in the tournament final. (The A-team were the victors).

But in the end the Kazakhs offered the Kyrgyz team very little competition at all: Kyrgyzstan demolished its oil-rich neighbour 15-3 to claim victory in a tournament that also saw them hammer a team of amateurs from the United States.

Kok-Boru was one of the more well-known of the more than 20 sports linked to the nomadic heritage of Turkic peoples across Eurasia to be featured at the games, in which over 40 countries took part. Now that Kyrgyzstan has twice hosted the biennial tournament, Turkey will step in to host the 2018 version.

Kok-Boru is popular among once-nomadic Turkic peoples, particularly the Kyrgyz and ethnically Turkic groups that live in Afghanistan, where the game is called Buzkashi.

It is often said that Kyrgyz children learn to ride a horse before they can walk and in the country's mountain villages a boy's first game of Kok-Boru is tantamount to a rite of passage. 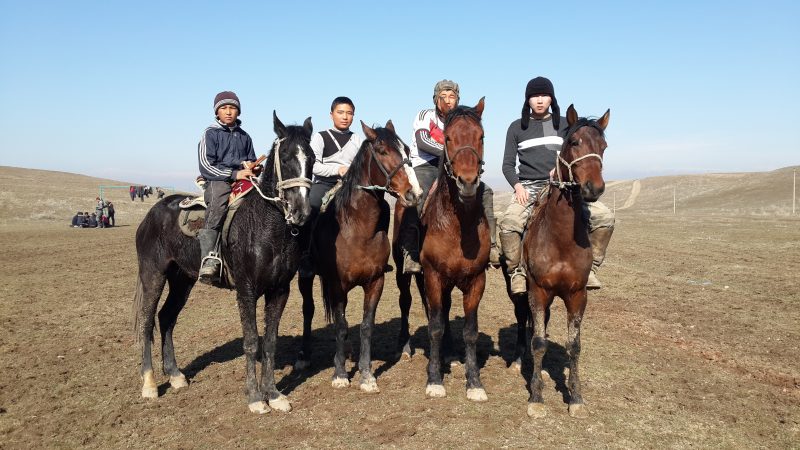 The game requires high levels of physical stamina as well as a strong instinct for self-preservation, since injuries incurred in the sport can be serious and even fatal. The most experienced players practice for a very long time to be able to perform elaborate stunts on horseback while simultaneously vying to capture the game's goat-carcass “trophy”. A boy who cannot ride a horse and compete in games such as Kok-Boru and Er Enish (horseback wrestling) can scarcely call himself a zhigit, which in the Kyrgyz language translates roughly as “skillful and brave man”. 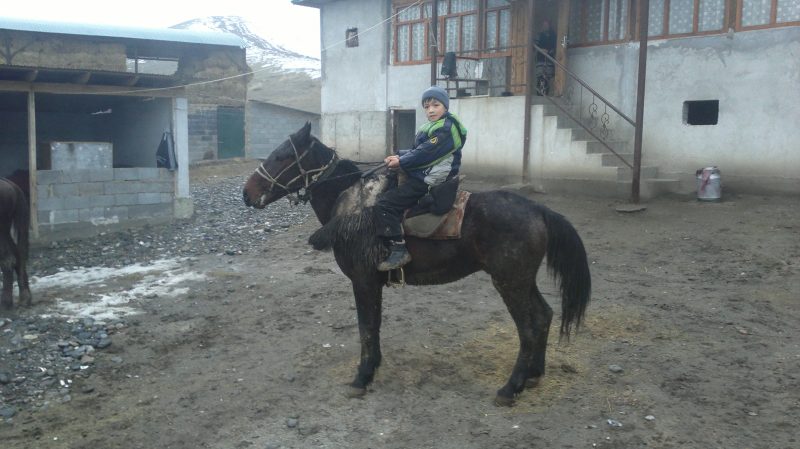 Boy on horse in. Photo by Erlan Bakirov.

Not any goat will suffice for a Kok-Boru contest. Typically a special goat scout visits a livestock market to select a goat weighing 35-40 kilograms. A heavier goat carcass is a better prize for the players, who compete at professional level in two teams of twelve riders but practice in smaller and larger numbers.

While the World Nomad Games take place in summer, the Kok-Boru season is usually considered to run from November through February. For high-level games in the colder months game leaders make a 10-centimetre incision in the goat's underbelly, extract the animal's organs and bury the carcass in the snow for two hours, so that it stays intact. They then sew up the cut with rope.

Kyrgyz citizens hold Kok-Boru tournaments for different reasons, such as to celebrate national holidays, a child’s birth or a marriage. Sometimes the games have wealthy backers and successful players can win cars or tens of thousands of dollars.

A video of a Kok-Boru  game in Jany-Turmush village in southern Kyrgyzstan. The prizes in this game — carpets and sheep — were rather comparatively modest.

For Chinghiz, pictured below, Kok-Boru is a major source of economic income. He wins around three cars per year and earns $2,500 – 3,000 in a season, depending on whether the teams he plays for prove successful. 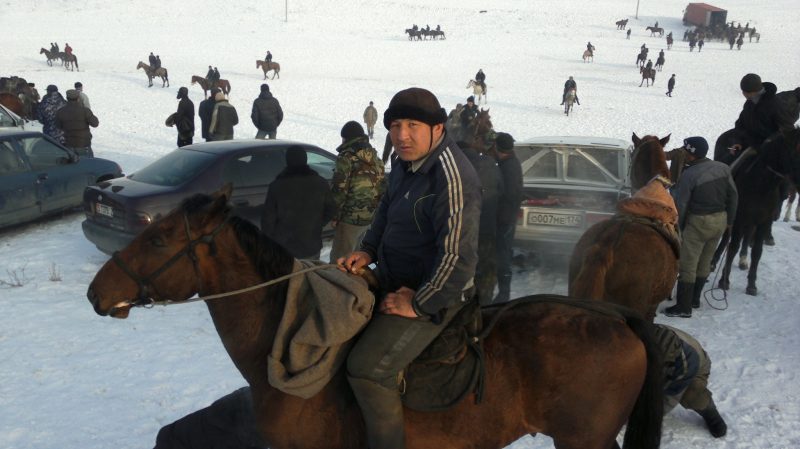 After a hard-fought game comes the feast. That's right, Kok-Boru players frequently—but not always—eat the same goat over which they compete. As one player that spoke to Global Voices for this article explained: “During the game, the ulakchi (players) pull the goat and the horses trample the carcass. This tenderizes the meat. [When it is cooked] it melts in the mouth.”