A short history of Halloween in Japan 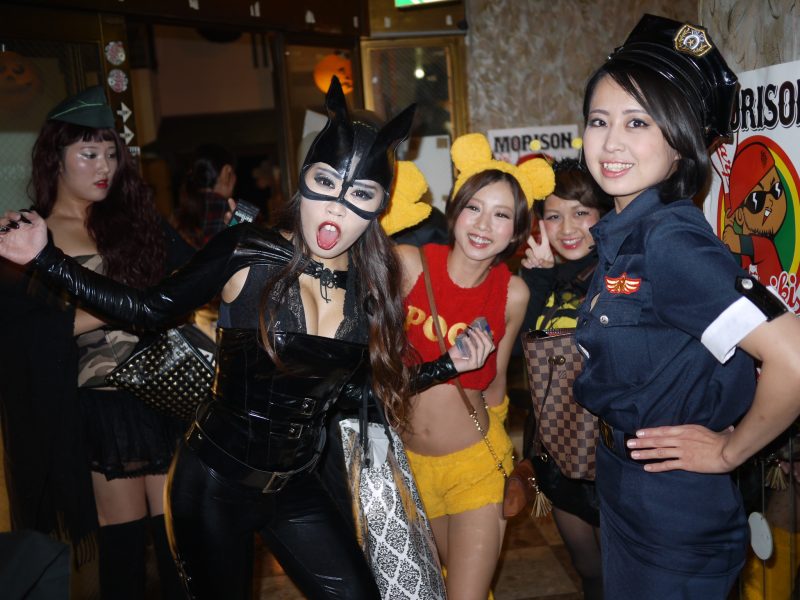 It's October and Japan is gearing up for Halloween; ghouls, ghosts and broadly grinning jack o’ lanterns wink from shop windows, and seemingly everything is now available in pumpkin flavor. But Halloween is still a very recent phenomenon in Japan. Not so long ago, hardly anyone in the country even knew that such a thing as Halloween existed. What brought on the holiday's sudden surge in popularity?

Q: What would you like to dress up as for Halloween? A: ‘A zombie.’
Why? ‘So that I can join the zombie flash mob at Universal Studios Japan (USJ).’

This month's theme is ‘What would you like to dress up as for Halloween?’
[Photo contest entry instructions]
[…]

Japan is known for taking Western holidays such as Christmas and Valentine's Day and making them its own.

While the Japanese versions of these holidays are not quite the same as their original counterparts, they do have one thing in common: they are a great opportunity for companies to make bucketloads of money.

It's less than a month until the end of Halloween Horror Nights at Universal Studios Japan… There is no escape… Don't pass up the opportunity to experience USJ's 15th anniversary zombie extravaganza! Until November 6!

It comes as no surprise, then, that it was theme parks that first introduced Halloween to Japan. 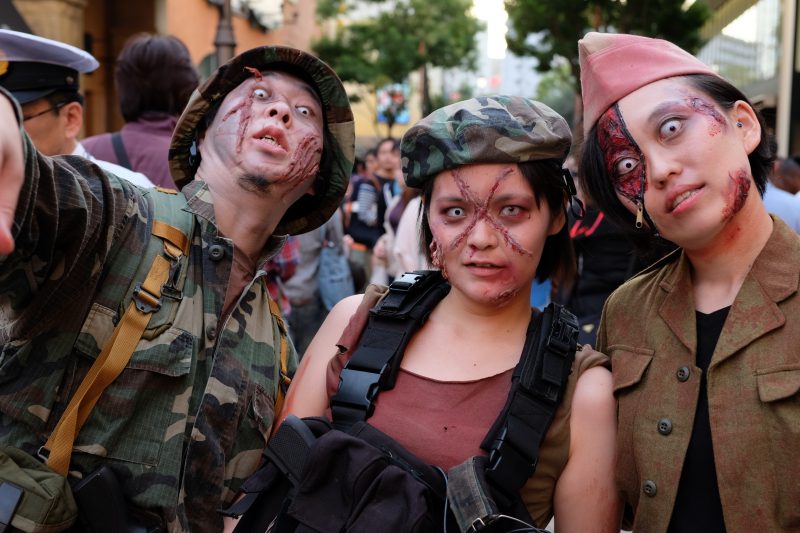 Tokyo Disneyland began “Disney Happy Halloween” in 1997. The event was a hit, and has increased in scale every year since. Now, the celebrations kick off as early as September.

Universal Studios Japan (USJ) in Osaka, which opened its doors in 2001, jumped on the Halloween bandwagon the very next year. Today, Universal Studios offers a variety of horror-themed events during the spooky season, and invites guests to come in costume.

The USJ theme park has plenty of walk-throughs, a new take on the traditional haunted house (also popular in Japan) and other Halloween attractions for guests who enjoy a good fright.

Perhaps the most popular Halloween attraction at Universal Studios is its “zombie flash mob.”

Zombie mob at USJ's Gramercy Park. It was so cool, I couldn't look away…

I thought I could hear the zombies laughing at the strange sounds one of the zombies was making, but maybe it was just my imagination. LOL

One of the reasons that Halloween has taken off in Japan is probably the country's well-known affinity for cosplay.

Many Japanese people will gladly take any excuse to wear a costume, and bars, nightclubs, and theme parks have taken advantage of this, promoting Halloween as a time for dress up and debauchery.

Around October 31, hordes of witches, vampires, zombies, schoolgirls, and zombie schoolgirls can be found in Shibuya (in Tokyo), Amerikamura (in Osaka), and other busy areas of Japan's major cities. 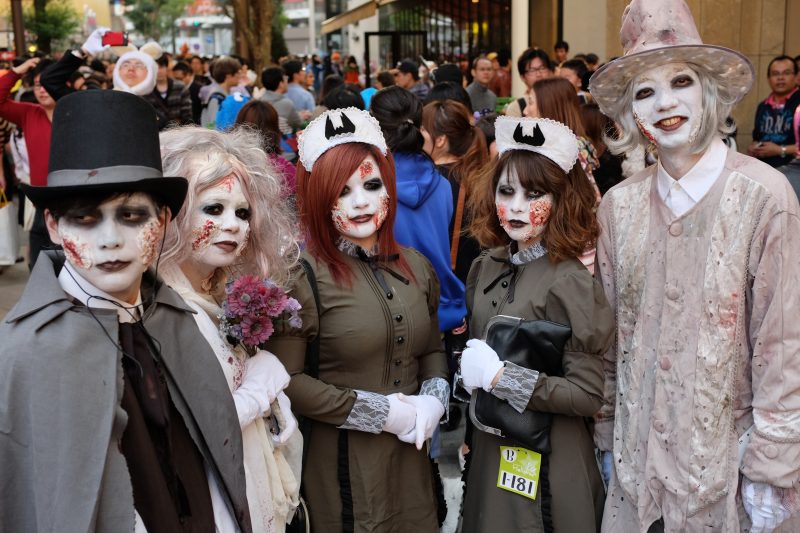 Trick-or-Treating: Links to the Mafia?

Halloween is largely a costume festival in Japan, where trick-or-treating has failed to catch on. Due to the Japanese people's reluctance to inconvenience others, it is unlikely that trick-or-treating for children will see an increase in popularity.

Perhaps the closest thing the country has seen to trick-or-treating is an annual Halloween party hosted by Yamaguchi-gumi, Japan's largest mafia (or yakuza) organization, where mobsters hand out bags of candy to children (though it seems like they don't wear costumes themselves).

While some are not too happy with children accepting sweets from mobsters, generosity has always been part of the yakuza's strategy.

The mafia even tweets to let parents know to bring their children for treats:

Halloween celebrations are in full swing at the Yamaguchi-gumi headquarters in Kobe! Candy for children up to elementary school age. Until 7:00 tonight! We still have plenty left to give away! Trick or Treat!! I'm a resolute supporter of the Yamaguchi-gumi.

Although the Yamaguchi-gumi's party was cancelled last year due to internal strife and fears that children could be harmed in the event of an “incident” (no word on whether the group plans to restart the party this year), there are plenty of other ways for kids to enjoy Halloween in Japan. There are Halloween parties at schools and kindergartens, and colorful costume parades.

It's not just adults who enjoy dressing up.

It's the simplest costumes that are the scariest. LOL

Halloween in Japan: Too Much Trouble?

It's not all fun and games, however. Some people have been calling for an end to Halloween in Japan, partly due to the trail of destruction left in the streets following wild Halloween parties.

This Twitter user offers a creative solution to the garbage problem:

The backlash against Halloween dates back to before its explosion in popularity, when the holiday was celebrated almost exclusively by expats.

The infamous Yamanote Line Halloween parties started sometime during the 1990s when, on October 31, a group of foreigners took over the train—or at least a car or two—as it looped around Tokyo.

The police have worked to shut down the rowdy parties, and in 2009, a group of nationalist protesters showed up bearing signs urging “stupid foreigners” to leave. Their assertion that “we Japanese don't need Halloween” perfectly sums up the anti-Halloween sentiment held by some people in Japan.

The Yamanote Line parties have unfortunately led to some animosity between expats and the anti-Halloween crowd.

Ludicrous attempt by the Japanese at preventing ‘gaijins’ (foreigners) from having Halloween parties on the Yamanote train line.

But with a market size of over a 122 billion yen (or one billion US dollars) in 2015, foreigners are no longer the only ones celebrating Halloween in Japan, and it seems likely that the holiday is here to stay. 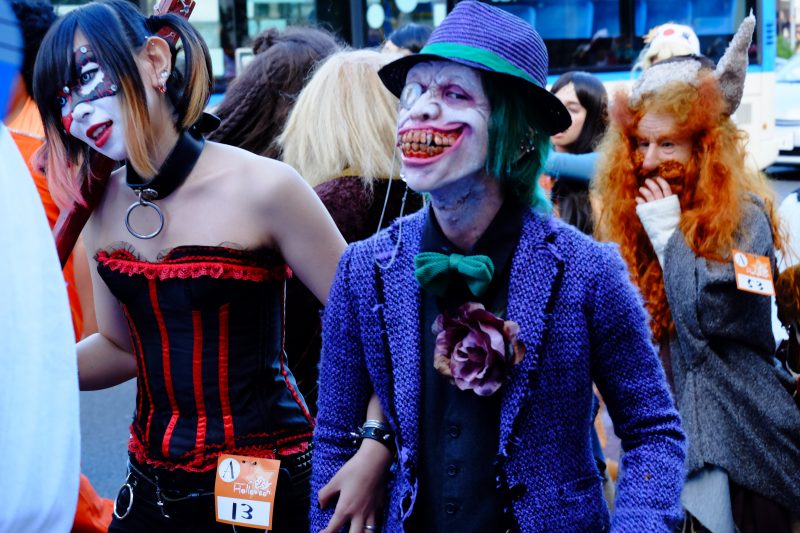 Maybe that isn't such a bad thing. With their creative costumes, Japanese people do Halloween well. As long as their fun doesn't come at the expense of others, there's no reason why why Japan's Halloweeners shouldn't keep doing what they do best.