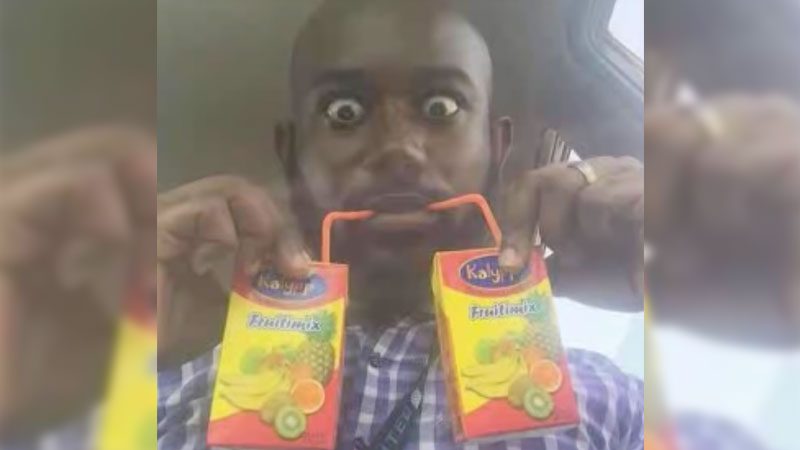 Ghana is a relatively peaceful African country, especially when it comes to election season. Politicians here have found a way to transfer power peacefully. Ghanaians are also known for their light hand with tough socio-political issues, finding fun in matters most others might not.

Most recently, critics of leading opposition presidential candidate Nana Akuffo Addo ridiculed him by spreading a photo of him sipping juice from a box of Kalyppo—a beverage popular among schoolchildren.

The mudslinging effort would backfire, however, with Addo's supporters turning it into a viral challenge: the #KalypoChallenge (spelled with one less “p” than the actual brand name), wherein Internet users must photograph themselves with boxes of Kalyppo juice and other locally made products.

Umaru Sanda, a journalist with the local radio station CitiFM, recently marveled at how Addo's supporters have managed to exploit the juice-box photo:

Always love it when people turn their “misfortune” into a great success. That's what the #NPP has done with this #KalypoChallenge. Maturity

The online challenge is inspiring some especially creative adaptations, too. Mainprince Essuman shared the following spin on the juice-box selfie:

The online challenge has attracted a lot of people including one of Ghana's famous musicians, A Plus. He posted a picture of him holding the Kalyppo fruit juice while chewing meat:

One of the most popular responses to the KalypoChallenge features a young man performing a local gospel song using the word Kalyppo in the lyrics:

The makers of Kalyppo juice thanked Ghanaians for their support on their Facebook page:

Therefore as social media marketers/strategists, we must strive to find and support major cause behind the campaigns we run. Finding a good cause to support with your product will go a long way to compel your audience to engage with it. E.g. A cause to help small businesses with your products, cause to promote peace as election approaches.

Blogger Ameyaw Debrah noted how Addo's supporters managed to flip this meme on its head:

Kalypo fruit drink must be the hottest commodity on the market right about now! Ghana’s Social media landscape was swamped with photos of people sharing photos of their Kalypo moments after the New Patriotic Party (NPP) flagbearer, Nana Akufo Addo was pictured sipping his Kalypo. Even though many believe that the photo was initially released to mock the NPP leader, his followers have succeeded in pushing the argument that the former Attorney Generalwas promoting local products with that simple sip.

If all this excitement can be created around the #KalypoChallenge – imagine what we can do with #MadeInGhana; one item every month. #GHLivin

Gavivina Okudzeto, meanwhile, warned the opposition leader to focus on campaigning instead of the #KalypoChallenge:

Your colleagues are campaigning day and night and you sit in Accra and do #Kalypochallenge. Will it bring votes? https://t.co/Rz5NiYjBkN

The buzz surrounding the #KalypoChallenge is still growing, with local celebrities like former President John Kufour joining in on the fun.