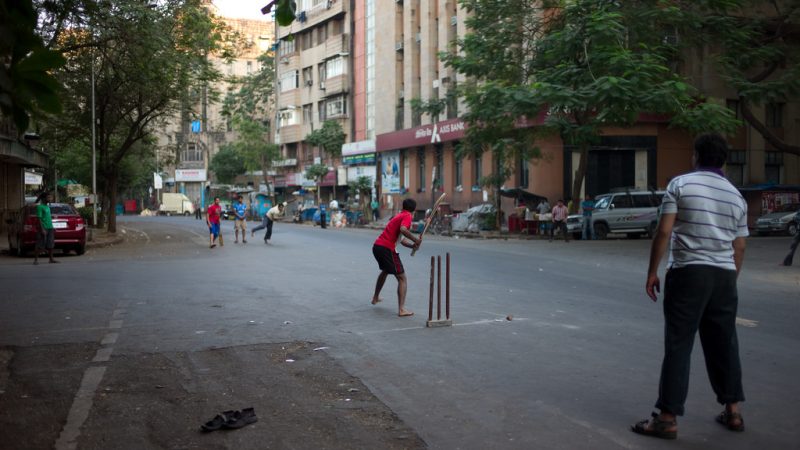 Due to shortage of open space, young people resort to playing cricket on the streets of Mumbai. Image from Flickr by Mohamed Nanabhay. CC BY 2.0

The post originally appeared on Video Volunteers, an award-winning international community media organization based in India. An edited version is published below as part of a content-sharing agreement.

Mumbai is the most populous city in India with an estimated population of 18.4 million. The area originally was a set of seven islands, but the city came into its current continuous shape thanks to a land reclamation project during the mid-18th century. Being the financial, commercial and entertainment capital of India, it attracted a lot of people over the years — and its open spaces started filling up. Even its reserved parks are being encroached or leased out.

The shrinking open spaces in the suburbs of Mumbai is affecting children, who yearn to run, play and have fun. There are sports facilities that rent out space and equipment for a fee, but it's only for the handful of people who can afford it, leaving a majority still in need. This lack of open space is forcing young Indians to find places to play that may not be the best for them, like the streets.

Amol Lalzare, a Mumbai community correspondent with Video Volunteers, has been an advocate for creating spaces for children in the suburban slums of Mumbai for almost 10 years. He brings us a video report on how children in the cramped suburbs of Mankhurd, Mumbai are struggling to play.

Dinesh, 10, and his friends play cricket in an area surrounded by defecating neighbours, drunk teenagers, shards of glass, and other filth. They hide the condition of their “playground” from their parents. “We don’t tell our parents that we play here. They think we go to a proper ground to play. If they know we play here, they will not let us out to play,” Dinesh told Amol.

Playing where they do opens the children up to bullying, physical harm or in the worst case scenario, sexual harassment. The lack of open space especially creates barriers for girls since their security is the primary concern for parents, as Amol’s video here showcases. Recent research by Pukar, a Mumbai-based NGO, states that lack of space forces girls to quit playing at the age of 12. Compare that to boys, who play up to the age of 20.

“Whatever be the games, playing is an important part of our lives,” Amol says in the video report. “The children of my neighbourhood face many difficulties looking for a safe place to play, and I intend to change it for their sake.”

Why playgrounds are necessary for children

With open spaces shrinking in urban areas, especially play facilities, it is not uncommon to see children playing on busy roads and in similar places.

“Various figures portray Mumbai’s per capita open space ratio as ranking among the lowest of all the world’s major metropolitan areas, and especially more so if the national park and mangrove creeks are not included as open spaces,” says naturalist and nature writer Sunjoy Monga.

Compared to its fellow megacities such as New York and Singapore, Mumbai has an abysmal paucity of gardens and playgrounds. A 2012 analysis by initiative Open Mumbai reveals the appalling ratio of 0.03 acres of open space for every 1,000 people — a far cry from London’s 12 acres, New York’s four acres and Singapore’s six acres per 1,000 people.

The Mumbai High Court, in a judgment on a mill land in 2005, noted that children in the city may be born with mental and physical infirmities if the oxygen levels reduce gradually due to lack of open spaces and recreational facilities.

Amol, for his part, wants the children of Makhurd to have a safe haven to run, play and be free like children should be and has made a request to the local councillor.