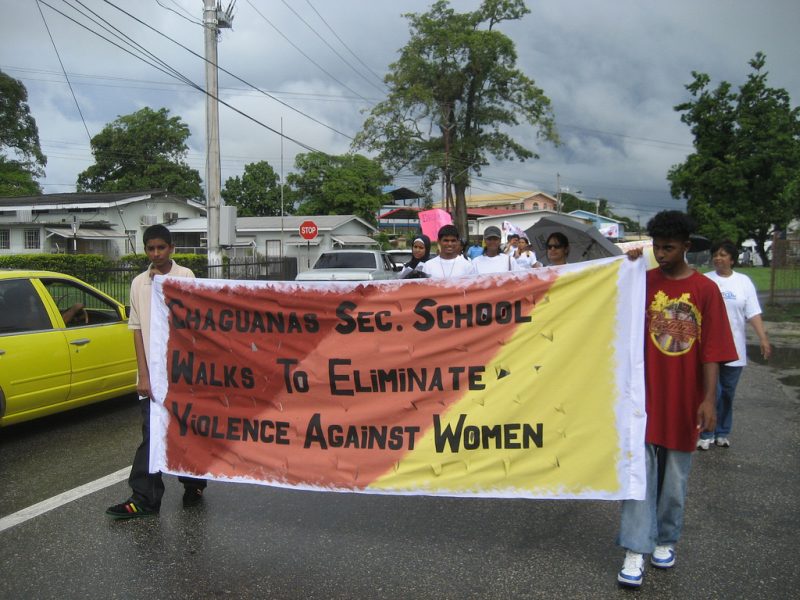 Young men from the Chaguanas Secondary School in Trinidad & Tobago take part in a 2008 Walk against Domestic Violence to commemorate the International Day for the Elimination of Violence Against Women. Photo by CWGL, (CC BY-NC-ND 2.0).

In February 2016, Facebook user Rachael Sukhdeo posted a series of selfies. One eye was bruised and swollen, the side of one of her breasts was black and blue and there were cuts and scrapes about her body. The photos, which were accompanied by a status update saying that she was a victim of domestic violence, created an immediate stir on social media — especially because she was brazen enough to post everything on the Facebook page of her husband's business. The post has since been taken down.

At the time, Sukhdeo received a wave of online support, with women commending her bravery and encouraging her to be a beacon for others. Fellow domestic abuse survivors shared their stories and assured her that she did the right thing in leaving.

The incident sparked a vibrant national discussion in Trinidad and Tobago about violence towards women and — though Sukhdeo was full of praise for the female police constable who dealt with her case — about the manner in which the police allegedly handle reports of domestic abuse.

The blogosphere was therefore disappointed — if not surprised — when on Monday, October 10, 2016, Sukhdeo told the court that she no longer wanted to pursue the charges laid against her husband.

The case was dismissed, but social media did not let Sukhdeo off the hook so easily. Many netizens could not reconcile the departure from her initial angst, when she said, “I want to encourage EVERYONE that is in an abusive relationship to ask God for the strength and courage to walk away”, with her decision to reconcile with her husband.

Once again, she took to Facebook to explain. When she posted the photos back in February, she said, she was “completely frustrated, hurt, depressed and devastated”, prepared to get out of her situation regardless of the outcome. She hit back at critics who suggested that the whole thing was a publicity stunt, or that she went back to her husband to regain access to her luxury lifestyle. Thanks to counselling, she said, there have been positive changes in his behaviour.

While some of her followers were supportive of her decision to keep her family together, others did not feel as charitable. One women's rights activist, Diana Mahabir-Wyatt, warned that while some men do change, in far too many cases, domestic violence occurs in phases — and the improved behaviour Sukhdeo is seeing could very well just be the honeymoon phase.

In a detailed blog post, activist Brendon O'Brien lamented the lack of understanding about the realities of domestic violence. While he understood people's frustration at Sukhdeo's decision, he said:

The fact that she’s decided to return to that relationship […] has nothing to do with intelligence. […] Rachael is an incredibly smart lady; smart enough to use [her husband] Sheron’s own business page to gather attention to her plight and situate herself in the middle of the national consciousness, at least. That sort of person isn’t dumb. But she is human. That means she can be seduced by affection and scared of retribution, like all human beings.

He went on to talk about battered person syndrome, the need for sympathy rather than cynicism, and the lack of faith many citizens have in the justice system.

In a recent article published in Time magazine, Trinidadian women's rights advocate Sherna Alexander Benjamin called out the local media for sensationalising the violence and desensitising people to its effects. Benjamin cited some disturbing statistics:

According to Margaret Sampson Brown, the head of the Victim and Witness Support Unit of the Trinidad and Tobago Police Service, ‘Between 2005 and 2015 almost 300 women have been murdered as a result of domestic violence.’ This is an average of 30 women per year. This is already 30 women too many, but many […] on the ground believe this figure underestimates the full extent of this crime.

Between 2009 and 2010, for example, more than 12,000 new domestic violence cases were filed in the magistrate courts.

The problem is pervasive throughout the region as well. At an address that the secretary general of the United Nations, Ban Ki Moon, gave in Barbados in July 2015, he noted that “the Caribbean has among the highest rates of sexual assault in the world” and that “three Caribbean countries are in the global top ten for recorded rapes”.

Put that against the backdrop of a system that is ill-equipped to deal with the problem, you will begin to understand the challenges for women who are living the daily horror of domestic abuse in Trinidad and Tobago. Benjamin explained:

The support mechanisms for women and children have serious gaps. And the lack of research and disaggregated data makes it difficult for non-government organizations, as well as government agencies and academic institutions, to make sense of the present challenge.

But there are potential solutions. Benjamin suggested, among other things, that the shelter system needed to improve; that “the government should place gender-based violence advocates in every major hospital in the country and in every police station”; and that universities could play a role by offering “degrees or even certificate courses specifically for combating and preventing gender-based violence”.

Most importantly, she said, “As an entire society, we need to do a better job of supporting victims. We need to shift cultural norms so that the victim isn’t blamed for the violence against her, so she isn’t further victimized by an uncaring public.”

Or, as Brendon O'Brien put it, in Rachael Sukhdeo's case:

So we’ve got no f**king right to vilify her for navigating a broken system in order to protect herself and her children. Of course we can say this is not the ideal, but we need to be honest about the fact that there is no ideal place for her here. And then we’ve got to f**king build that safe place for all those like her, instead of yelling at her for not building it herself.