Paraguay, a Country Where Cows Fly While Schools Crumble 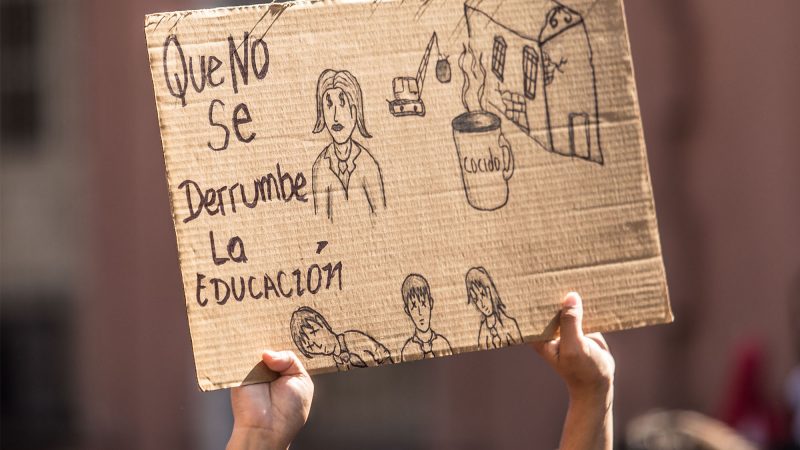 “Don't let education crumble.” A banner used in one of the many protests that have taken place in Paraguay demanding improvement to education. Image from Kurtural, published with permission.

This article is the first in a series published by the Paraguayan economic and cultural news site Kurtural. An edited version appears below with permission.

Paraguay's education system has been broken for decades, and today is fueling confrontations and dissatisfaction.

Despite threats from Paraguay's minister of education, Enrique Riera, thousands of students took to the streets of the country's capital city, Asunción, in May, demanding improvements to infrastructure in schools that are literally collapsing. Riera had warned students that anyone who attended the protest would be penalized, while teachers would have their salaries cut.

At the same time, over at the National University of Asunción, students participated in protests in order to defend reforms to the education system, in spite of the attorney general's office commanding university leaders to stop. For the first time in history, all of the faculty went on strike. Some of the demands for reform included requests that a state of emergency be declared regarding school infrastructure and for an increase in the quality of university teaching. According to international rankings, Paraguayan education is found to be one of the lowest in terms of quality.

These protests, which were the largest of an ongoing movement in support of educational reform, are symptomatic of a profound education crisis in Paraguay, as well as of a two-part conflict: a powerful minority class that has seized the education system in order to maintain their privileges against the many who want to bring a sense of opportunity back into education. An essay by Camila Vollenweider that was published by the Latin America Strategic Center of Geopolitics illustrates part of this struggle:

Paraguayan students have brought [this problem] to light during the struggles of these last years: out of the 53 universities that exist in the country, 45 are private, and the eight public ones also have tuition costs; likewise, 32 of the 53 universities have not obtained any certifications from the National Agency of Evaluation and Accreditation for Higher Education, something that has contributed to the proliferation of so-called “garage universities”, which have recently been reported for swindling 6,000 students […]

[The] budget of 4.1% gross domestic product (GDP) that the government allocates to this matter is very far from the 7% that UNESCO recommends […] The current educational policy dates back to the Stroessner dictatorship [which lasted from 1954 to 1989], and has not changed much until [current President] Cartes’ time in office. The budget devoted to education is not enough — although this last one has increased it — access to public university is harder, the criteria behind the appointment of rectors and deans is political, and the promotion of and increase in subsidies and scholarships are given to private education centers to the detriment of the public system.

Education as business and a ‘key to accumulating political power’

The stories of this series, “Cows that fly, schools that crumble,” (“Vacas que vuelan, escuelas que caen“) brings us closer to this conflict. They focus on the heroes who face daily battles so that the majority of Paraguay can access their right to education; battles that should not exist, if education were actually recognized as a right in the country.

The high cost of gaining access to education can be seen in the story of Christian Quiñónez, who says goodbye to his children every day before heading to the university and crossing the Paraguay River in order to study law, without knowing if he will return alive. Or the teachers at Maricevich school, in the northern part of the country, who must withstand harassment from armed groups, military soldiers, police, drug dealers, and hit-men in order to teach in their communities. Or in the account of how, in order to go to school, 46,000 boys and girls must submit themselves to a system of servitude that exploits children.

When the right to education is not guaranteed, it can become either a business or the key to accumulating political power. The education crisis in Paraguay puts into question the very model of current production, which ought to create resources for the well-being of everyone. If we are capable of exporting live cows by plane — the first country in South America to do so — how is it possible that schools collapse while teachers and students are in them?