WhatsApp and Viber Blocked on Election Day in Montenegro 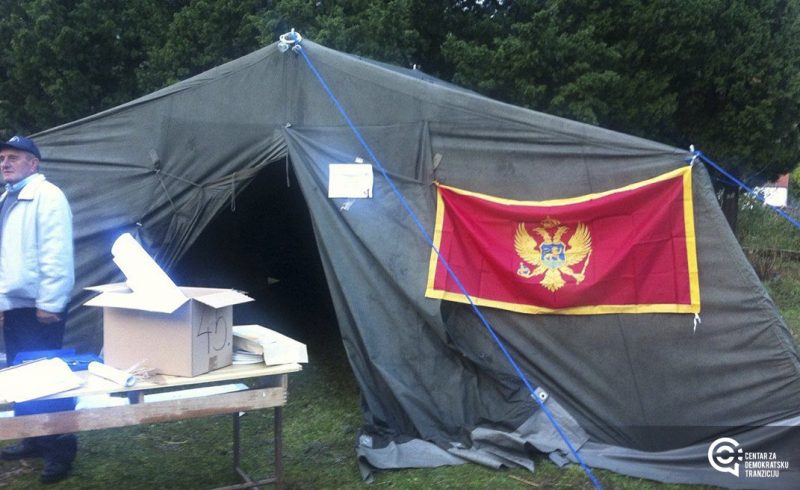 “Believe it or not, this is an polling station Komarno in the city of Bar“, tweeted the Center for Democratic Transitions. Photo by CDT, used with permission.

Parliamentary elections in Montenegro on 16 October 2016 were marred with allegations of irregularities, reported via social networks, and a temporary ban on WhatsApp, Viber and similar messaging apps.

The regulatory Agency for Electronic Communications and Postal Services ordered telecom operators to prevent the use of messaging applications. The Agency reasoned that the ban was intended to keep users from receiving “unwanted communication,” an official designation for spam that could also apply to mass messages sent on behalf of specific candidates or political parties.

The agency's executive director Zoran Sekulić refused to respond to questions from Vijesti newspaper about the reasons for this decision. In a later report published by Vijesti, they described their phone call with Sekulić:

The website of the Center for Democratic Transitions (CDT), the leading Montenegrin election observation NGO, was under attack during the election day, and inaccessible during the afternoon and evening.

Discussions about the elections took place on social media, where citizens shared information about the elections in local Slavic languages using the hashtag #IzboriCG (Elections Montenegro) and the country name #CrnaGora, as well as in English via the equivalent hashtags #ElectionsMNE and #Montenegro.

The ban on messaging apps

The blackout of messaging apps was a leading topic in social media conversations about the election. While the Agency had not published any information about its decision on its website, local operator Telenor sent a string of tweets (1, 2, 3) explaining the blocking order. In sum, they read:

The Agency for Electronic Communications and Postal Services ordered all telecommunication operators to turn off the option to use the applications Viber, WhatsApp and the like, which were used today for unwanted communication with the users. The possibility for use of these services will be turned off until the Agency determines an end of the ban with a special notice.

What is the aim of blocking Social Media when it is so easy to overcome it? Those who deal with it in the Government think that by banning one Social Media they can prevent or silent the flow of information. Seriously!? Isn't there anyone who will tell them that this is nonsense and that it'll come back to them like a boomerang, multiplied? Apparently not. Obviously, they are [not] following examples from the past when other countries tried to do that.

Montenegrin media consultant Ana Bogavac pointed to the lack of protections for expression via digital media:

@tenaprelec recently adopted leg.doesn't say a word about newMedia,leaving this gray area open 4abuse by both opposition and those in power

Access to Viber was reinstated at 7:30 pm, after the polling stations closed. CDT announced this via one of their Twitter accounts:

Victory for the status quo?

A number of problematic issues arose during the day, from “technical difficulties” such as providing accessibility to all, to the “atmosphere of a coup d'etat” which had a negative influence on citizens’ freedom, according to opposition candidate Neđeljko Rudović.

Election observation NGOs CDT and CeMI continued to provide information from the field based on their monitoring activities.

Independent media group Balkan Insight maintained a live blog during election day. Based on the exit polls, they predicted that veteran Prime Minister Milo Đukanović, the leader of the Democratic Party of Socialists, has won 36 of the 81 seats in Montenegro’s parliament. This will allow him to form a majority government, if minority parties choose to join him.

Having alternated between the positions of Prime Minister and President, Đukanović has long been the president of the Democratic Party of Socialists of Montenegro, which has governed Montenegro ever since the introduction of a multi-party political system in the early 1990s.

The party was formed in 1991 as the successor of the League of Communists of Montenegro, which had governed Montenegro within Yugoslavia since 1945.

I was a kid when Milo came to power. If I live long enough, I will probably be a grandfather when he steps down.

Referring to upcoming elections in Macedonia, and the struggle of the ruling party chief to remain in power, journalist Rade Marojevic compared Đukanović's leadership to that of former Macedonian PM Nikola Gruevski: