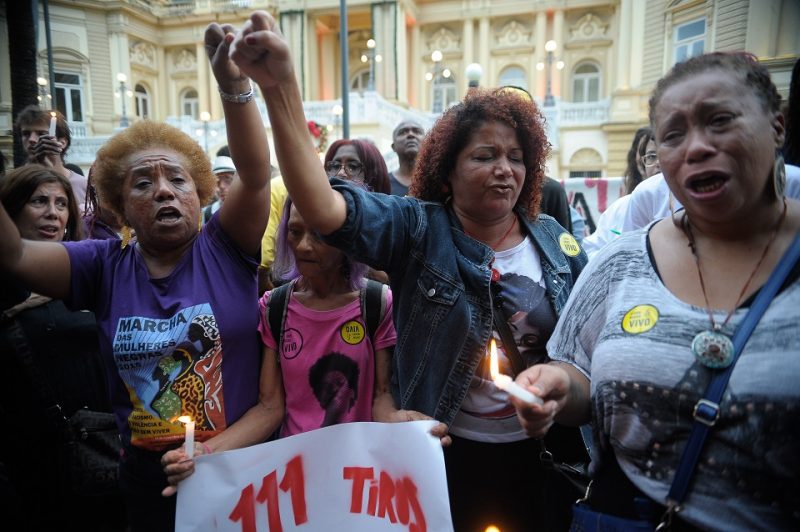 A group of women protest in Rio de Janeiro at the state government palace after five young black men were murdered in November by police officers in what became known as the Costa Barros massacre. The mother of one of them, Joselita de Souza, died in July — according to her family, of depression. Photo: Fernando Frazão/Agência Brasil, CC-BY 3.0

Doctors say Joselita de Sousa died of cardiorespiratory failure. But her family says she died of depression. Two weeks before her death, the police officers responsible for her unarmed black teenage son's death were released from prison on a court order.

The portrait of homicide victims in Brazil consists of men, young, black or part-black from low-income families. But Joselita's case illustrates another picture: women whose names do not appear in official homicide statistics, but are systematically victimized by the structural violence in their country.

Justice for Joselita, and women like her, is increasingly being fought by other women. For the last ten years, the Mothers of May have become a significant force in Brazil fighting against police violence and offering support to women directly affected by it.

Only days after her death, Joselita was remembered at Black July, a three-day gathering, organised by different Brazilian social movements including Mothers of May. A delegation from the Black Lives Matter movement in the United States also attended. Joselita was remembered during a discussion about mental health of black communities affected by violence. Waltrina Middleton, a Black Lives Matter activist, said:

Seven months before Joselita's death, her 16-year-old son Roberto was out celebrating his first pay check with friends when four police officers fired over a hundred bullets at their car. All five black teenagers from a poor Rio de Janeiro suburb were killed. They were unarmed when the so-called Massacre of Costa Barros happened. The police later said they were after a group of cargo thieves. Court proceedings revealed that the police also tried to manipulate the crime scene to make it look like they acted in self-defense.

After her son's brutal murder, Joselita started attending psychological counselling sessions at the State Department of Social Welfare, but her family says she abandoned the treatment as she had no money for the bus fare. Her heart gave out on July 5, soon after she had also been diagnosed with pneumonia and anemia.

My condolences to the relatives and friends of Joselita de Souza, another black mother killed by the structural violence of this traumatised country.

The latest version of the Brazilian Violence Atlas, an annual report published by the Applied Economic Research Institute (IPEA) and the Brazilian Forum on Public Security, reveals that 58,946 people were murdered in Brazil in 2014. Those nearly 60,000 deaths represent 10% of all homicides taken place in the world in 2014. With a national average of 29.1 homicides per 100,000 inhabitants, the report puts Brazil among the 12 countries with the highest rates in the world. To compare, in the United States, the homicide rate in 2014 was of 4.5, according to statistics by the FBI.

Homicides in Brazil affect certain demographics more than others. For example, the homicide rate for men in the age range of 15-29 years old is 61 per 100,000 inhabitants — well above the national average. Stark differences arise when considering race: the rate among black individuals is 37.5 per 100,000 while for non-blacks (which includes both whites and indigenous peoples) is 15.6.

Researchers and violence experts such as Daniel Cerqueira (IPEA) and Atila Roque (Amnesty International) have studied why so many people die from murder in Brazil and how this affects so many black and low-income women.

For low-income households, the loss of a masculine figure between 25 and 35 years old also represents the loss of a significant part of the family income and an increase in psychological problems like depression and anxiety disorders. For women, this means early widowhood, the absence of partners in particular social groups. The loss of the male component frequently forces women to interrupt their studies and generates an enormous social disadvantage for them.

According to the World Bank, there are more women than men living in poverty. The prevalent form of economic globalisation accentuates social inequalities and consequently boost typical problems of a society in which women are very dependent on men, especially in a low-income population.

Many researchers also point out that there is an absence of effective public policies to support women who have lost fathers, husbands, and children for murder.

The destiny of thousands of Brazilian women shows how a country strongly guided by the market economy that meets the needs of higher-income sectors and ignores problems of the lower classes keeps its citizens in a disadvantaged competition.

In an article for the book Origens e Destinos (Origins and Destinations), which explores issues on social inequality in Brazil, sociologist Ignacio Cano projects the effects a high homicide rate of men might have in the future demographic composition of Brazil. For him, this will lead to a “gender imbalance in the population”, which in turn will have consequences to family structures — for example, an increase in households headed by women.

A drawing cartoonist Carlos Latuff made for the Movement Mothers of May. Illustration: Carlos Latuff, used with permission

The Mothers of May movement

Headed by women, Mothers of May, has been at the forefront of all high profile cases of police brutality in Brazil for the past 10 years. In early October, Mothers of May staged a major demonstration against the annulment of the trial of the Carandiru massacre, when military police stormed the Carandiru prison following a riot, killing 111 inmates. On September 27, São Paulo's state court decided to annulled the trial, which was to this day still ongoing, of the 74 law enforcement agents pointed as responsible for the massacre. The movement has embarked in many court battles to demand accountability by police's allegations of self defense that resulted in death.

The movement was born after a spike in police killings in May 2006 to unite family members of the victims of the police killings. That year, there was a confrontation between the PCC, Brazil's largest criminal faction and police officers. After the PCC conducted a series of attacks on police officers, paramilitary death squads — formed by off-duty police officers — paid back with blood. Curfews were put into place, buses, shops and whole universities shut down São Paulo. In the end, 564 people were killed in the span of a week, 505 of them civilians. Crime scenes were altered, many bodies never found. A majority of civilian deaths were perpetrated by state agents rather than the PCC.  And while justice for the victims of 2006 is still pending — to this day, nobody ever stood trial for the crimes — the Mothers of May keeps on giving names and faces to the cold homicide statistics in Brazil. In 2012, they self-published the book “From grief to fight: May Mothers”, telling the stories of the victims and families who have been killed by the police violence in 2006. Their organisation gives hope for justice to mothers like Joselita.