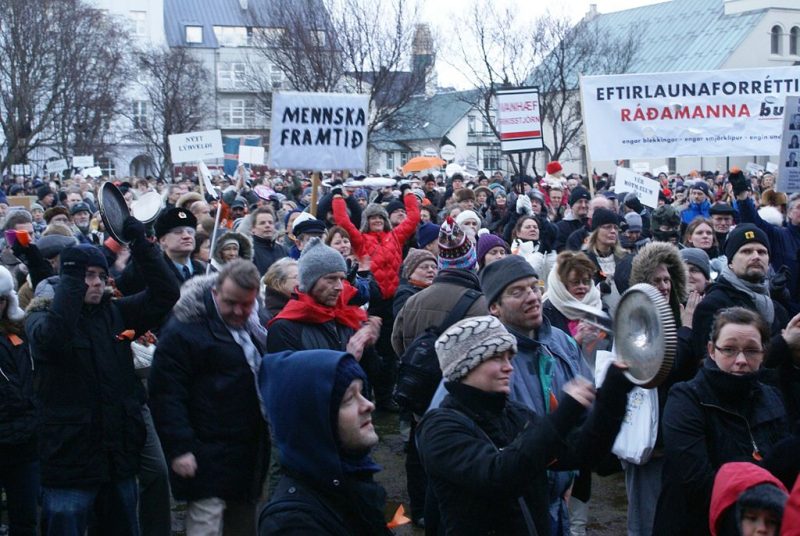 Icelanders protest in January 2009 during the country's “Pots and Pans Revolution”. PHOTO: OddurBen (Own work) (CC BY-SA 3.0) via Wikimedia Commons.

I’m in Iceland for the term—on sabbatical, with my family, giving my kids a sense of ~America, writing tons of law-geek stuff—and watching an amazing political battle brew in the upcoming parliamentary elections (October 29). Turns out, democracy has problems everywhere—except that here, an extraordinary citizens movement is doing something about it.

Some background: You’ll remember the financial crisis of 2008. That crisis hit Iceland hard. So hard that tens of thousands marched on the Parliament banging pots and pans (aka “The Pots & Pans Revolution”), and demanding change.

Some linked that crisis to a failure of Iceland’s constitution. And they responded to that failure by launching a process to crowdsource a new one. At first, the process was not connected to the government. But then the Parliament embraced the movement, and gave it form. A thousand people (randomly selected) would identify the values of the new constitution. Then a constitutional council would be elected to draft a constitution based on those values.

More than 500 ran. Twenty-five were elected. And for four months, they worked to draft a new constitution—in public, posting their version on Facebook, and taking comments from around the world. The Parliament then put the draft up for a vote (non-binding, asking whether there should be a new constitution “based on” the Council’s draft). Four years ago, more than two-thirds of those voting approved the draft. (Blueberry Soup is a wonderful documentary about the process.)

And then, amazingly, Parliament did nothing. The bill to adopt a constitution “based on” the draft stalled. Everyone (in Parliament at least) seemed to forget it.

But when the Panama Papers scandal broke, and the Prime Minister resigned, the people of Iceland were reminded that there was still a government to fix. And so an amazing citizens movement in Iceland started to develop, to press the issue to the center of these elections.

I’ve been able to watch this movement unfold. And as a “fix democracy first” sort of democrat, I’ve been watching with great admiration (and a bit of jealousy). The leaders of this movement are all non-politicians. There are politician heroes, too, like Birgitta Jónsdóttir of the Pirate Party, and Katrin Jakobsdóttir of the Left Greens, but the real activists here are not people running for anything. They are just citizens trying to get a government that knows for whom it works — because after four years of ignoring a referendum, that’s apparently an open question.

A few days ago they launched a social media campaign to frame this election around this issue. The message of the campaign is a clever remake of a familiar meme: “Can you [as in the Parliament] hear us [as in the people] now?” Four videos (two in English, two in Icelandic) set the terms of the debate, plus the first 2 of 10 (in Icelandic) discuss the top 10 problems the new constitution will solve. The English versions are below.

The campaign asks voters — “whether on the right or left”—to vote only for parties that commit “to making the ratification of a new constitution based on the draft of the constitutional council a priority in the next parliament.” So far, the four key opposition parties have made that commitment — the Pirate Party, Left-Green, Social Democrats, and the Bright Future party. There’s a great chance those four will constitute a majority in the new Parliament.

If this movement takes off, it has a powerful potential—in Iceland and internationally. The Icelandic Constitution Society (which is running the campaign) has promised to spend the money they raise on rallying Iceland to this cause. But anything raised beyond what’s necessary will go to democracy work internationally.

Imagine the frame of this campaign — Can You Hear Us—applied to democracies globally? (I’ve already reserved CanYouHearUs.US). My favorite line from the longer of their ads: “While we are local, democracy is global. Let’s show them what that means.”

This could be a rare victory for democracy reform this election cycle—and one that could inspire many elsewhere.

Lawrence Lessig is an American academic, attorney, and political activist. A version of this article was previously published on Medium. This edited version is published under an Attribution 4.0 International (CC BY 4.0) license.