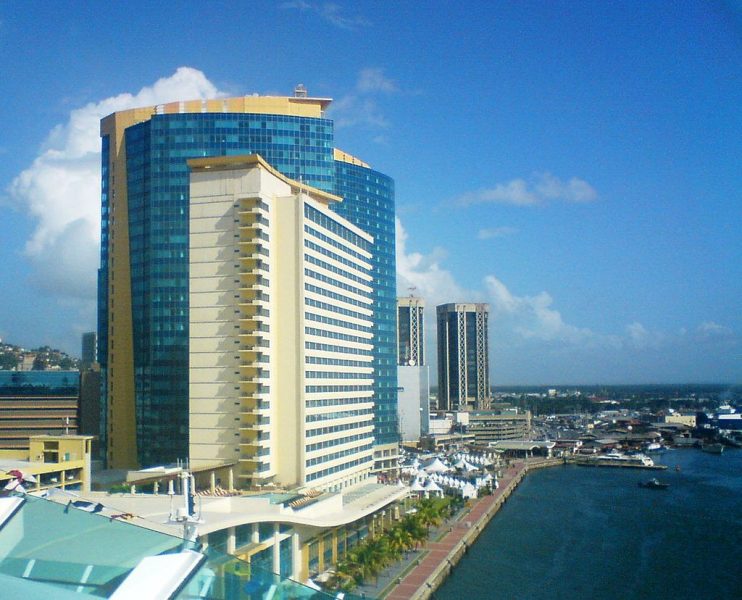 The Waterfront Complex in Port of Spain, Trinidad, where the country's parliament is currently located. Photo by DizzyNN (Own work), CC BY-SA 4.0, via Wikimedia Commons.

The inference, of course, was that the subjects of the photo were Al Rawi's children. The attorney general has not yet confirmed if this is the case, but did say that members of his family have done “threat assessment” training as part of security protocols for the families of state officials in high-risk positions.

Moonilal, however, has called for Al Rawi's dismissal, saying the situation depicted in the photo was a breach of the country's Firearms Act. As two other government ministers confirmed that the children in question were indeed Al Rawi's, Moonilal said, the attorney general “now has no moral authority to pronounce on criminal matters”.

Social media reacted immediately. Some Facebook users wanted Al Rawi to answer the question and confirm whether the children in the photos were in fact his. Others considered the matter a red herring that had no place in a budget debate. And yet others were incensed that a politician would use children as political pawns, and that the media found it acceptable to reproduce photos of minors, even with their faces obscured.

A country is entitled to, and does, make its own values. We think it's ok to produce in parliament pictures of children? And the media republishing the photos? Obscuring the faces does nothing because you're identifying the children. You have to admire Al Rawi's restraint really.

So I've been listening to all the prattling going on about the laws of T&T being broken because two teenagers held weapons in an Army Camp whilst being supervised by trained Defence Force personnel. Well then I'm about to turn myself in. As a teenager and a member of the Trinidad and Tobago Cadet Force, I was trained in and used firearms on the range in La Seiva Maraval, in school at Trinity College, marched on the streets of Port of Spain on at least two Independence days whilst bearing arms, and even held one out to salute the Queen of England when she visited and drove past my position. Since many are adamant that there are no exceptions whatsoever to this law, I hereby apologize for violating the laws of T&T and I urge everyone who has ever served or currently serves as a Cadet to turn themselves in forthwith. Or …. is this all just bullshit?

There were also concerns about the source of the photo leak, with some convinced that it came from within the defence force. Phelps, in a later update, said:

It should worry you that there are state security people with political allegiances so influential that they would leak the pictures for political mileage. The implications of that might keep you awake at night.

Moonilal has insisted that the photos were found on Facebook.

Some social media users thought the affair highlighted the class divide in Trinidad and Tobago. On Facebook, Anderson Bridgelal remarked:

Have been saying for a long time that the SHEEP has [sic] been stumbling over themselves to position themselves amongst certain CLASS and ELITES in the society. Take a look at how that type of behaviour has resulted in the creation of the UNTOUCHABLES in the society, who believe that they and their children can do what […] they want and no one can do anything …
It's all a GAME …..

Others were simply saddened by the level at which politics is being played out in the country's parliament. Facebook user Jamilia Wallace explained:

I refused to mention the story on my timeline immediately because I wanted to hear both sides of the story. . .knowing that this is someone's children we're talking about and I have children of my own. I personally believe that though ppl have Parliamentary coverage they need to be more responsible and stop using the Parliament to score cheap political points. Yes it is a good sensational story and since bachannal [sic] is the order of the day it sells but things like these is [sic] wrong.
What made this most reprehensible he aimed to link this to ISIS.

A kinder man, with children of his own, would have had a quiet word with the parent, either directly or indirectly. It's more important to score political points. And, so it goes…