The U.S.'s Deportation of Haitians Shows That Asylum Applicants Are Far From Equal Under the Law 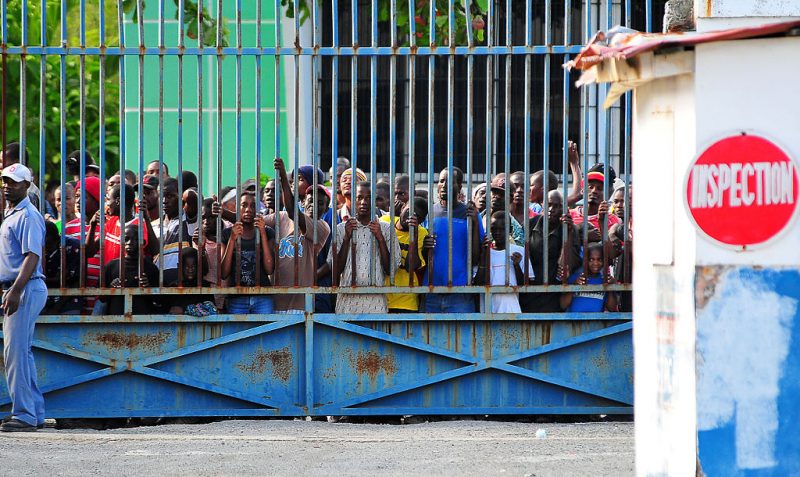 Haitians in the commune of Port-de-Paix await the distribution of relief supplies following the earthquake that devastated the country in 2010. PHOTO: Daniel Barker (via Wikimedia Commons)

Article 14 of the Universal Declaration of Human Rights states that “Everyone has the right to seek and to enjoy in other countries asylum from persecution.” Yet many immigrants have found this statement to represent an unattainable ideal, rather than an actual policy.

Since September this year, the United States has been taking quiet steps to expedite the removal of Haitian immigrants entering the country.

According to Department of Homeland Security officials, newly arriving Haitian immigrants will be subject to “expedited removal” if they are unable to articulate a credible asylum claim. Expedited removal is a process through which individuals are detained, then ordered deported in a matter of days, often without access to legal counsel or an appearance before a judge.

Putting aside the United States’ longstanding and continual interference in Haiti, or the fact of the Caribbean nation’s astounding poverty, the treatment of Haitians seeking asylum is a case study in the failure of modern asylum law and practice. This includes rampant abuses at the border, the fast tracking of certain removal cases, and an overall lack of due process throughout the immigration system.

“The distinction between “migrants” and “refugees” is now at the heart of policy debates worldwide. As issues like climate change, regional violence and demographic challenges lead to global population shifts, the concept of exactly who deserves protection can and should be challenged.”

One simple example is the disparity between the treatment of Haitian asylum seekers and those from Cuba. As Ruth Ellen Wasem argued in a 2010 Congressional Research Report: “Both nations have a history of repressive governments with documented human rights violations. Both countries have a history of sending asylum seekers to the United States by boats.” Yet to this day Haitian immigrants are judged by very different standards compared to their Cuban counterparts.

For example, following the 1991 coup in Haiti the United States Coast Guard repatriated 538 Haitian immigrants. This was done without providing these individuals any opportunity to express their fear of returning to their country, as is required by international law. The repatriation occurred despite ongoing political repression inside the country, and in violation of the principle of non-refoulement under international law.

According to Wasem's report, during the period 1981-1990, 22,940 Haitians were intercepted at sea. Only 11 of them were considered eligible even to apply for asylum in the United States. The prevailing consensus at the time was that Haitians were simply economic migrants and did not qualify for asylum.

The distinction between “migrants” and “refugees” is now at the heart of policy debates worldwide. As issues like climate change, regional violence and demographic challenges lead to global population shifts, the concept of exactly who deserves protection can and should be challenged.

Asylum law in the United States is based primarily on the the 1951 Refugee Convention. Article 1 of the Convention, as amended by the 1967 Protocol, defines a refugee as:

“Following the 2010 earthquake that devastated Haiti, the United States granted special temporary immigrant status to Haitians facing deportation, though never went so far as to grant them asylum.”

The connection to persecution on account of “race, religion, nationality, membership of a particular social group or political opinion” provide what is often referred to as the “nexus” between persecution and a protected ground. They have come to be known as foundational concepts in refugee law, but to what extent do they deny equal protection under the law?

The language and scope of the Refugee Convention were determined in the aftermath of World War II, and dealt primarily with the challenges faced by those left outside of their country of origin following the war. Yet these definitions have remained largely static over time, though over the last decades the concept of “particular social group” has expanded to include individuals who are victims of domestic violence or identify as LGBT.

What exactly constitutes a “particular social group” has largely been defined by various courts, and has been the subject of ongoing arguments and litigation. To identify those who qualify as “refugees”, however, varying criteria have been used.

For example, when the Organization of African Unity (OAU) adopted the Convention Governing the Specific Aspects of Refugee Problems in Africa in 1969, it provided the following criteria for identifying refugees:

“Any person compelled to leave his/her country owing to external aggression, occupation, foreign domination or events seriously disturbing public order in either part or the whole of his country of origin or nationality.”

Under this definition, individuals fleeing economic devastation, climate change, or regional war would be considered refugees, without having to identify with a particular social group or protected ground. This may prove crucial in the coming years, as environmental concerns emerge as a leading cause of displacement and migration.

A more inclusive definition for refugees would also safeguard against policies which accept or deny refugees based simply on their country of origin, without regard for their individual circumstances—a growing trend in parts of Europe.

Following the 2010 earthquake that devastated Haiti, the United States granted special temporary immigrant status to Haitians facing deportation, though never went so far as to grant them asylum. This all came to an end on September 22, 2016, ironically only weeks before Hurricane Matthew wreaked havoc on Haiti, forcing another temporary suspension in deportations. Long-term relief, however, is nowhere in sight.

Events like the 2010 earthquake and Hurricane Matthew should constitute a basis for humanitarian asylum, even if not recognized by the original refugee conventions. Does sending people back to a country that no longer has a working infrastructure and is facing famine and disease constitute justice? The law must evolve to reflect its true intent, which, in this case, is the protection of basic human rights and the cooperation among nations to protect those who are in need and in danger.

Those of us who are privileged enough to live in the wealthy countries of the world should continue to advocate for expansion of humanitarian policies. And we should dare to believe that there is room on this earth for cooperation, compassion and progress with regard to justice and asylum.