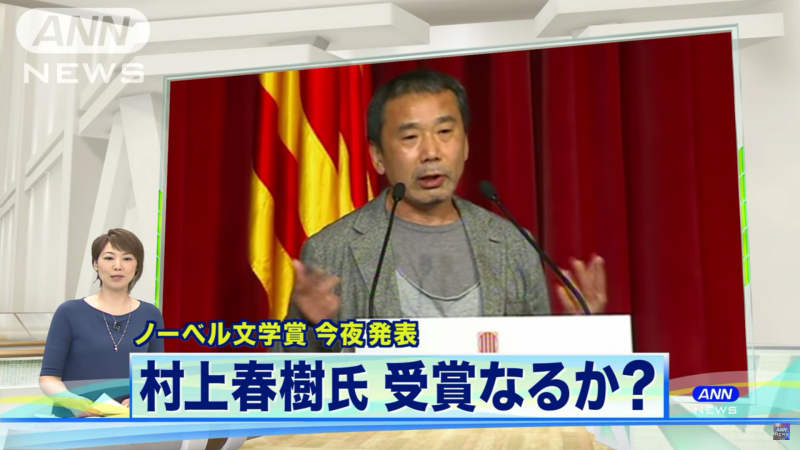 On October 13, the 2016 Nobel Prize in Literature was awarded to American singer and musician Bob Dylan “for having created new poetic expressions within the great American song tradition”.

While many people celebrated Bob Dylan‘s achievement all over the world, some in Japan were left feeling disappointed by the news. Many thought this would finally be the year Japanese novelist Haruki Murakami would win.

Just 12 hours until the 2016 Nobel Prize [in Literature] will be announced. Will Haruki Murakami receive the prize this year? — Murakami Haruki News [fan site]

Haruki Murakami is one of the most popular writers working in Japan today. Whenever Murakami releases a new book, it becomes a major cultural event in Japan:

Countdown to the new Haruki Murakami book going on sale. The line is huge, so I guess I just have to give up [and go home].

Thanks to the fact his novels and short stories have been translated into at least 50 different languages, Murakami has developed a global following. Murakami has received numerous high-profile prizes in Japan and abroad, so a Nobel Prize in Literature would be the final achievement to cap off an extraordinary career.

In the lead-up to the announcement on October 13 by the Nobel Institute, Japanese TV network ANN reported that Murakami was the top-ranked favorite to receive the prize—and Bob Dylan wasn't even on the list of potential finalists: 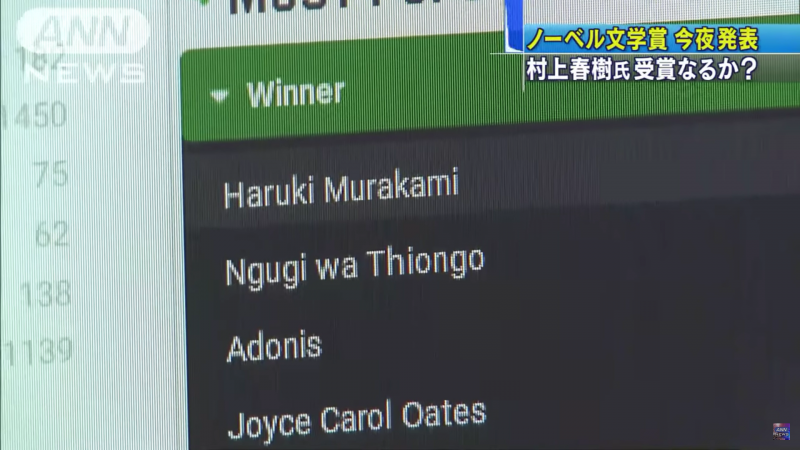 The Nobel Prize is held in high regard in Japan, which is home to the second-highest number of Nobel Prize winners after the United States.

Why, thank you! The Nobel Prize in Literature has been awarded to Haruki Murakami! It's Haruki!

But it was not to be.

The moment the #NobelPrizeInLiterature was announced. The hall erupted in surprise and joy. The initial announcement was made in Swedish (sic), but I did make out the words”Bob Dylan”.

The anticipation of a Murakami win was so great that alumni from the Japanese author's old high school in Kobe were assembled to observe the Nobel Prize announcement over satellite link.

Tabloid Nikkan Sports reported that at least one attendee appeared to be confused about why Bob Dylan was awarded a prize for literature:

A sigh passed through the audience at Murakami's old high school: “Isn't Bob Dylan a *singer*?”

Some Japanese Twitter users had a more cynical perspective on the annual hype surrounding a potential Haruki Murakami Nobel Prize:

But everybody seems to treat the Nobel Prize as if it were a game of musical chairs, with one lucky participant gets to claim a prize just for playing. (Of course, I think he should get the prize at some point).

For others, the pathos of what seems to be an annual exercise in disappointment has become darkly comical:

It's a beautiful, perfect arc that begins with, “Is this the year Haruki Murakami receives the Nobel Prize?” and invariably ends with him getting passed over.

The pattern [of hopeful expectation and crushing disappointment] is so predictable from year to year that it's not an exaggeration to say that “Murakami Nobel hype” become an art form in itself—it's an all-day excursion bookended by optimism and despair. […]

While some may be questioning the decision to award Bob Dylan, a songwriter, a Nobel Prize for literature, there is at least one Japanese Twitter who was happy with the result:

I've read all of Haruki Murakami's novels, and I know the novelist himself really dislikes all of the hype [being made about his potentially winning the Nobel Prize]. The people who want Murakami to win are really just thinking about their own happiness.

I've listened to all of Bob Dylan's songs—I wonder if members of the Nobel committee have even listened to [everything Bob Dylan has done]. I know the Nobel judges likely have not read Haruki Murakami in the original Japanese.

So getting the Nobel Prize just seems like it's all about politics.

This year, I'm just happy that songwriting is being treated as literature.

Masae Okabayashi contributed to this piece.