More Naughty Than Nice: The Dutch Government’s Approach to the Black Pete Tradition 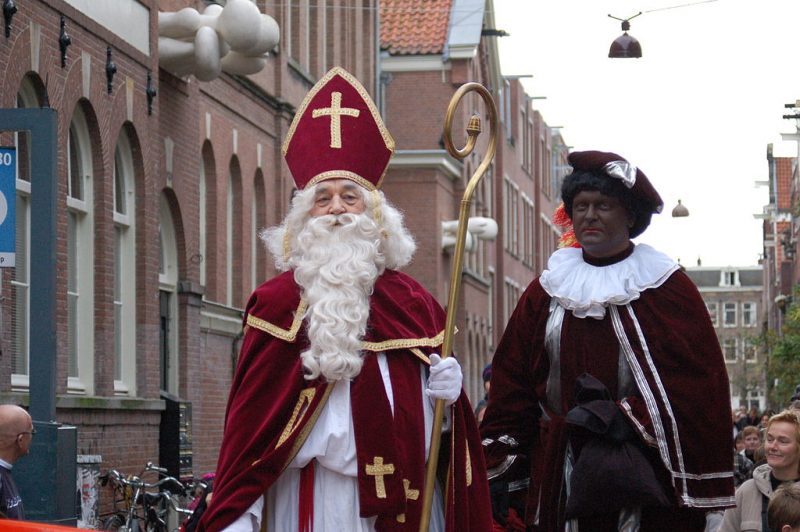 As the summer holiday comes to an end and normal life in The Netherlands resumes, there are two things the Dutch can count on: the premature appearance of pepernoten and chocolate letters in supermarkets, and a dramatic upsurge of the debate surrounding Black Pete or “Zwarte Piet”, as he is called in Dutch.

Both have to do with the celebration on December 5 of the holiday of Saint Nicholas, the North European counterpart of Santa, described by David Sedaris in his humorous description of the holiday as “painfully thin and [dressed] not unlike the pope”. Global Voices previously published a piece about the tradition.

Black Pete is generally described as Saint Nicholas’ helper, arriving with him on the boat from Spain, bringing gifts and candy to children who have been nice. Kids who’ve been naughty run the risk of being taken back to Spain or—potentially worse—not getting any candy.

“Regardless of the reason for his skin tone, Black Pete is essentially a yearly recurring appearance of blackface in a country that generally considers itself tolerant, open-minded, and non-discriminatory.”

The reasons given for Pete’s blackness vary from his being a Moor, to his face having been blackened from sliding down sooty chimneys to secretly deliver said gifts and candy. (For some reason, Saint Nicholas rides the rooftops on his horse–David Sedaris can explain). Regardless of the reason for his skin tone, Pete is essentially a yearly recurring appearance of blackface in a country that generally considers itself tolerant, open-minded, and non-discriminatory.

In recent years, The Netherlands has been divided into two camps: one arguing that the Black Pete tradition is racist, and one arguing that it’s a harmless Dutch tradition. Each have their campaigns and prominent figures arguing for either position in the various debates that take place on the issue in the run-up to 5 December.

An interesting perspective is offered this year by the Children’s Ombudsman, who released a report (in Dutch) recommending that changes be made to the Black Pete tradition. The Ombudsman noted that no proper research had been conducted to date on whether the way the Saint Nicholas holiday is currently celebrated has any negative impact on children. She concluded, however, based on conversations with children, that non-white children experienced increased instances of discrimination around the holiday. The current practice, the report stated, was in contravention of The Netherlands’ obligations under the Convention on the Rights of the Child, in particular Articles 2, 3 and 6. Following the release of the report, the Ombudsman received numerous threats.

“The Ombudsman concluded, based on conversations with children, that non-white children experienced increased instances of discrimination around the holiday.”

The matter of Black Pete has received attention in the past few years from various United Nations human rights bodies. In 2014, the UN Working Group of Experts on People of African Descent conducted an official visit to The Netherlands. In a statement made following the visit, the Working Group pointed to the apparent blind spot that many Dutch citizens have regarding the Black Pete tradition.

“It is a fact that no country is free of racism and the Netherlands is not an exception,” the statement said. “But for a country that has long been perceived as having a long tradition of tolerance and openness, the silence around racism and racial discrimination is surprising and worrying, It affects the awareness and sensibilities around cultural traditions and cultural diversity in the Kingdom as exemplified in recent debates around the Black Pete (Zwarte Piet) celebration.”

The Working Group had reported earlier that it had been the target of threats when its investigations into complaints filed on the portrayal of Black Pete became known. The right-wing politician Geert Wilders commented that “it would be better to scrap the UN than Black Pete.”

The Committee on the Elimination of Racial Discrimination, in its 2015 concluding observations on The Netherlands’ periodic reports on its compliance with the International Convention on the Elimination of All Forms of Racial Discrimination, encouraged the Dutch government to “…actively promote the elimination of those features of the character of Black Pete which reflect negative stereotypes and are experienced by many people of African descent as a vestige of slavery.”

The government dismissed the idea of banning Black Pete, but said it “would promote a discussion, however ‘uncomfortable,’ about racism.”

“The Netherlands’ official response does not inspire much confidence in light of frequently surfacing reports about the outright prohibition of, or police interference in, demonstrations against Black Pete, and the lack of investigation into threats made against those who oppose the tradition.”

The Netherlands’ official response does not inspire much confidence in light of frequently surfacing reports about the outright prohibition of, or police interference in, demonstrations against Black Pete, and the lack of investigation into threats made against those who oppose the tradition.

It also appears to demonstrate a lack of comprehension by the Dutch government of its obligations under international law—in addition to the treaties mentioned above, the International Covenant on Civil and Political Rights and the European Convention on Human Rights come to mind—or at least an unwillingness to effectively implement them. This is striking in and of itself, but even more so on the part of a country that is the birthplace of international law and prides itself on its tradition of open-mindedness and the upholding of human rights.

The big question is: what next? Litigation has yielded little result. The Dutch courts appear to be in favour of having “society” find a solution rather than forcing the government to do so, but Dutch society seems too polarised to engage in any constructive conversation about a solution. Meanwhile, there is evidence that what is meant to be a children’s holiday is negatively affecting the country’s young people. Should the Dutch government then not act to remedy this?

Otherwise, it will be up to Saint Nicholas and Black Pete themselves to step in: pack the government in a bag and take them back to Spain, together with all the naughty kids.