Uber Lands in Trinidad, Its Smallest Country to Date 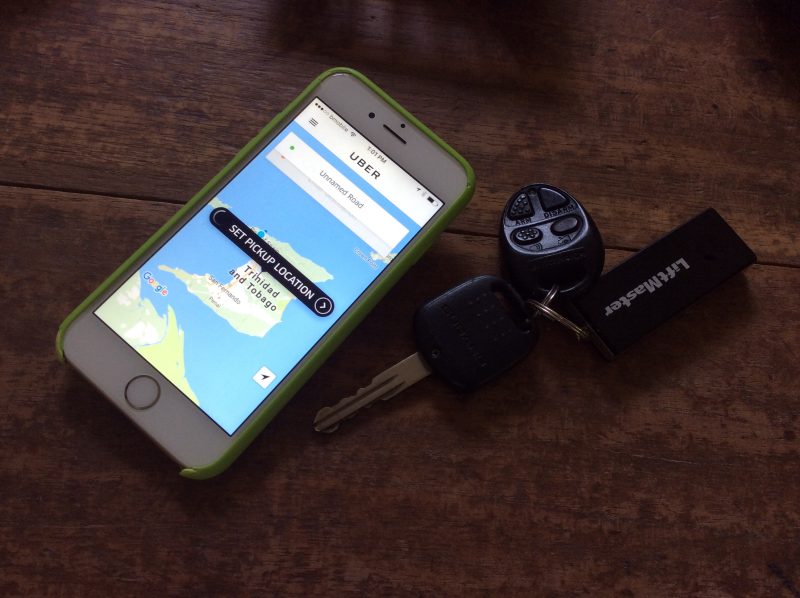 Last weekend here in Trinidad, the Caribbean branch of Uber Technologies Inc., the company behind the ride-hailing smartphone app you’d have to have been living in a severely media-deprived environment not to have heard of, held on-boarding meetings at a Port of Spain hotel for potential “partners”, as the drivers who form the core of the service are called.

Digital-only news site LoopTT, the only media outlet that seems to be taking the news seriously, has carried stories about the response from indigenous competitors and an interview piece with the regional representative. Loop also reported that Uber was yet to meet with the minister of transport, and that the company was seeking a meeting with said minister. An article posted on October 12 reported that the local association of insurance companies was concerned about the legality of the service.

For Uber, this is probably business as usual. The company didn’t become a household name by kotowing to local transport regulations and playing by the rules. In many, if not most of the markets into which it’s swash-buckled its way, Uber has incurred the wrath of municipal governments, taxi drivers, and their unions. I’ve travelled in more than one taxi that had an anti-Uber sticker on its window.

Trinidadians speculating on whether Uber will be bold enough to flout local laws regarding the use of privately licensed cars may not know that the company deployed a category of service for “non-professional” drivers called UberPop in highly regulated European markets, and almost got away with it. 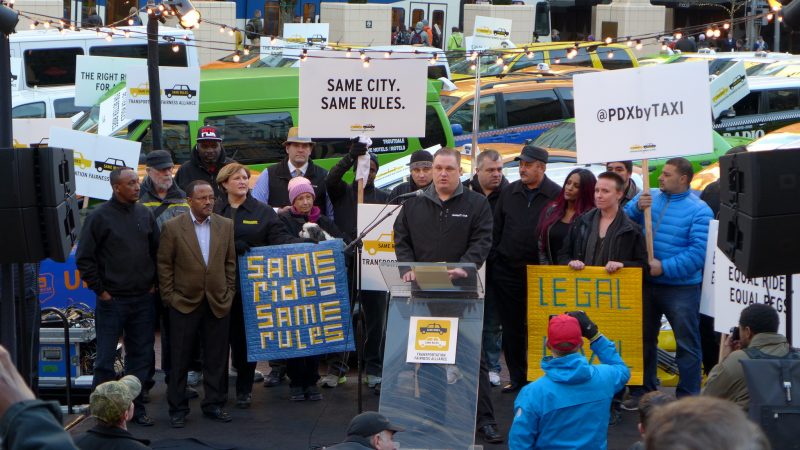 At an Uber protest in Portland, Oregon in 2015, organizers pressed for city leaders to make ride-sharing companies play by the same rules as cabs and Town cars by occupying a square. PHOTO: Aaron Parecki (CC BY 2.0)

We should also pay attention to Uber Caribbean GM Juan Andion’s slick characterisation of the company’s business model. According to Andion, Uber is simply a peer-to-peer service that “…matches riders with drivers…. I have my own car and I want to give a ride to someone else… imagine you are driving your mom to the airport.“

In a country where many taxi drivers own their vehicles, it is also possible, of course, that they too could sign on as Uber partners.

There’s another thing to note: unless I’m misreading Uber’s list of locations, Trinidad will not only be Uber’s point of entry into the English-speaking Caribbean, but also the smallest country into which the company has ever ventured. There are cities on Uber’s list larger than the whole of Trinidad and Tobago, with its population of 1.4 million.

I’ve used Uber several times in various countries, but I don’t always feel great about using the service. But like Amazon, that other behemoth many of us would prefer not to patronise, Uber is often the path of least resistance: it’s already on my phone; it works in several countries; and it doesn't scorn my Trinidad and Tobago credit card.

A screenshot from Uber's Port of Spain web page.

And on a number of occasions, Uber has saved my skin.

One icy winter evening in Buenos Aires, thanks to Uber, I was able to avoid the mad scramble of Argentines jostling in the rain for rush-hour taxis and wait instead in a warm lobby, tracking the progress of the black car-shaped icon representing Mauro’s Chevy on the screen of my phone and timing my dash out of the building to coincide with its arrival at the curb.

On a layover in London, having missed the last train back to Heathrow from an outlying Underground station, it was an Uber car that whisked me to King’s Cross station, not only in record time, but for a fraction of the cost of a London black cab.

On an upcoming trip to Mexico City, where security is a concern, you can bet I’ll be using Uber.

But the aforementioned cities are huge. How will Uber fare in tiny Trinidad and Tobago? Will it “change life”, as the headline of one article has suggested, in this country where crime and security are a genuine worry; where gas—now US$2/gallon after the partial removal last year of the government subsidy—is still relatively inexpensive; and where car ownership was made more attainable some years ago by the arrival on the market of cheap Japanese used vehicles?

And how is Uber going to play with the local public transportation system, on which, in spite of the abundance of private cars, many people still depend? 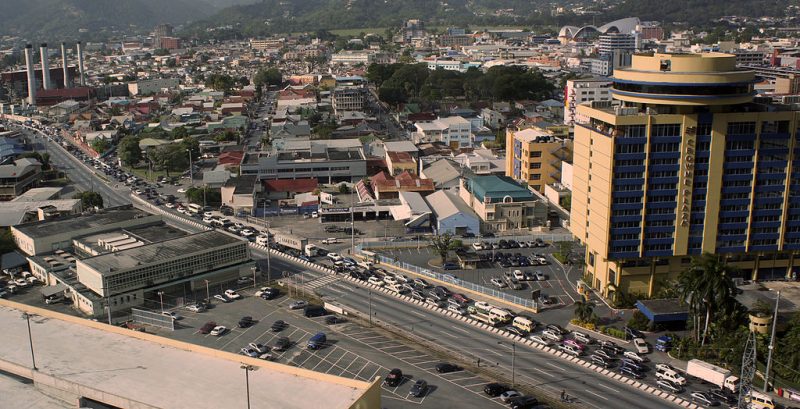 A traffic jam in Port of Spain, Trinidad in 2012. By Mariordo (Mario Roberto Duran Ortiz) (Own work) [CC BY-SA 3.0 (http://creativecommons.org/licenses/by-sa/3.0)], via Wikimedia Commons

Trinidad and Tobago’s public transportation comprises a constellation of services that have operated more or less the same way for decades.

The backbone of the system are “route taxis” and “maxi taxis”, shared-ride sedans or passenger vans that ply set routes along the country’s major arteries, allowing passengers to jump on and off at random points along the route. Fleets of clean, air-conditioned passenger buses run along similar routes. A system of “pirate” taxis—cars officially registered for private use—has been in operation for decades. They’re technically illegal, but ply their trade openly, and also fill a genuine need, shuttling people up and down mountain roads and through back streets and other places where official taxis don’t go.

(In an alternate version of history I would have added to this list a light railway. But that project was scuttled in 2010, for reasons both political and financial, re-initiated when the current government was elected in 2015, then scrapped again this year when the country went into recession.)

Rides are inexpensive. In and around Port of Spain and environs you’ll pay $4-5 (US$0.60-0.75) for a taxi, depending on the distance, and $3 (US$0.45) for the bus. For a couple of extra dollars, a taxi driver can be persuaded to go a little off his route and drop you to your door.

To a visitor, or even a local who doesn’t regularly use taxis, getting around this country on public transportation can be daunting. Taxi ranks are signposted, but tell you nothing about the actual routes taxis follow. And on certain routes taxi drivers employ an arcane system of hand signals to indicate which variation of the route they’ll be following.

Who’ll use the service?

My guess is that Uber won’t make much of an impact among the mass of regular taxi and bus users. But depending on how Uber prices its services, I could imagine users with some disposable income forking out a few extra dollars for a door-to-door ride under certain circumstances: when pressed for time, for instance; women concerned about security might use the service at night.

Another potentially lucrative market for Uber is teens in the middle- to upper-middle classes who are too young to drive or don’t own cars, and whose over-protective parents, uneasy about them rubbing shoulders with the masses in shared-ride taxis, currently spend too much time shuttling them from place to place. This group is also tech-savvy and own smartphones with parent-sponsored data plans.

The niche where I believe Uber will be most competitive is that currently occupied by a relatively small number of private taxis and taxi services. These are often one-person enterprises run by smart, entrepreneurial individuals who’ve built a loyal clientele on the basis of good service. Their main target market is visitors who don’t want to brave the country’s roads in a rental, and well-off but carless locals who don’t care to take shared-ride taxis, want door-to-door service, or both.

Demand for this type of service also burgeons during the carnival season, when partygoers bent on taking full advantage of the all-you-can-drink bars at “all-inclusive” parties hire taxis to play the role of designated driver. I can see Uber making an especially big impact in this niche-within-a-niche, particularly among tourists visiting for carnival who don’t have a go-to private taxi service and who might already have the app on their phones.

Uber, no doubt adept at calibrating their services for different markets, has already announced a key amendment to their service here in Trinidad: they say they’ll be deploying an option to allow payments by cash. This cancels out the service’s famous cashlessness, which is also a security feature, but in a market where a portion of its potential users may not have credit cards or care to put their info into Uber’s system, it’s essential. The ability to pay in cash is a feature I’ve appreciated in EasyTaxi, an app developed in Latin America that works with, rather than against, existing taxi infrastructure, and whom I wouldn’t be surprised to see land here in the near future.

Before it gets anywhere, however, there’s another key hurdle that that Uber, and the indigenous ride-hailing companies that, frankly, I’d prefer to support, will need to surmount: keeping a critical mass of cars in ready circulation, especially during periods of high usage. Will these companies manage to bring a sufficient number of drivers on board to produce that critical mass? And, in turn, convince a critical mass of patrons to stick with that service in order to retain those drivers?

It’s a problem I encountered when I tested QuikPickUp, one of Uber’s local competitors. According to QuikPickUp app, there were only two cars circulating near my location, and the app estimated it would take 16 minutes for one of them to get to me. That might be fine in certain situations, but the very idea of “hailing” suggests that you’re summoning your ride at or close to the moment you need it.

We’ll see how it goes.