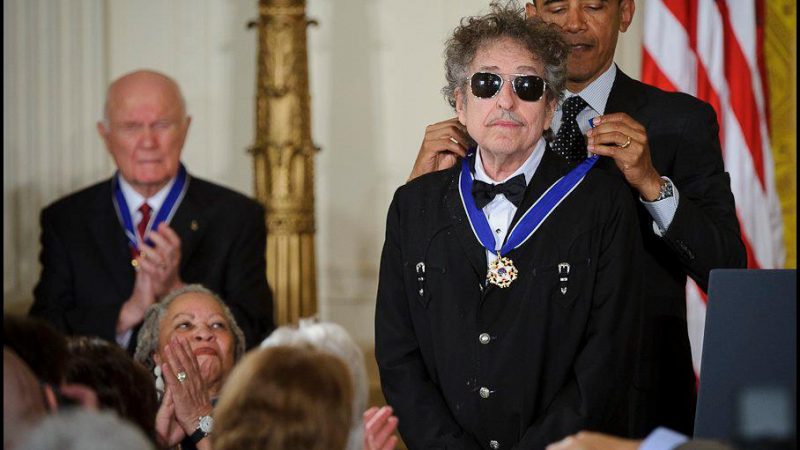 American singer-songwriter Bob Dylan has been awarded the 2016 Nobel Prize for Literature, becoming the second songwriter to have won the Nobel prize after Indian Nobel Laureate, poet, lyricist and singer Rabindranath Tagore, who received the honor in 1913.

Dylan was awarded for having created new poetic expressions within the great American song tradition. The 75-year-old musician has been influential in popular music and culture for more than five decades. He created much of his best known work during the turbulent times of the 1960s; his songs like Blowin’ in the Wind and The Times They are A-Changin’ were widely popular during the anti-Vietnam War and civil rights movements in the United States.

Bob Dylan is also immensely popular in some South Asian countries. In fact, in 2009 Indian author Nilanjana S Roy proposed on the Serkadis blog that Bob Dylan should be awarded the Nobel Prize:

How many roads must a poet walk down before he is awarded a Nobel? [..] Dylan’s Nobel chances are often treated as a joke; it’s assumed that the austere guardians of the universal literary fame would never unbend far enough to award the Prize to a song-writer. Especially a successful one. And there’s the question of how Dylan, with his twin aversion to formal dress and formal speeches, would react to receiving the Nobel.

The reason why Dylan deserves the Nobel has nothing to do with his popularity, or the fact that his works are actually still quoted, discussed and in wide circulation today. [..]

The argument for Dylan would rest squarely on the quality and influence of his work over the years, and the fact that they have now become classics of modern poetry, decades after they were first composed. It’s not just that Dylan wrote great songs—he wrote songs that were deeply rooted in the history of his times, and in a musical and verbal folk tradition that goes back for decades.

Giddy and delirious with joy! Bob Dylan gets Nobel for Literature 2016. Swingin’ Sixties and Crazy Seventies get… https://t.co/hjpCSxjmjz

Bangladeshis remember Bob Dylan for his participation at the Concert for Bangladesh, a benefit performance organised by former Beatles lead guitarist George Harrison and Indian sitar master Ravi Shankar on 1 August 1971, at Madison Square Garden in New York City. The concert was organised to raise international awareness and fund relief efforts for refugees from then East Pakistan (now Bangladesh), following the genocide perpetrated by Pakistan army and their collaborators during the Bangladesh Liberation War. A total of 40,000 people attended the concert, and close to US $250,000 was raised for Bangladesh relief. It was also Bob Dylan's return to the spotlight after a few years’ absence from the stage following a motorbike crash.

Here is a video of Bob Dylan performing at the concert for Bangladesh:

Tanvir Haider Chaudhury from Bangladesh, who lost his father during the war, wrote with joy on Facebook:

I have this sense of irrational glee at this news – as if someone in my immediate family or a very dear, old friend had won this. Well done your Bobness

Very happy that Bob Dylan was awarded Nobel Prize for Literature; always a big fan of his powerful & often brutal lyrics. He deserved it.

Its a Dylan night baby, and nothing tops ‘The Hurricane’. Congratulations to @NobelPrize for this awesome choice! https://t.co/MytBq5uRHd

No wonder some argue that he is one of the most important figures in pop-culture history — his work has clearly transcended international boundaries.