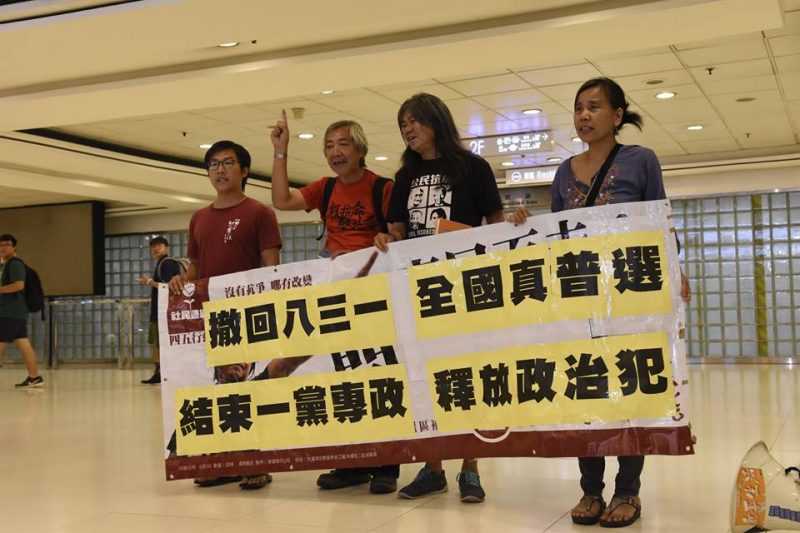 A number of activists were blocked from entering Macau on October 10. Photo from Long Hair Facebook.

In the two weeks leading up to his visit, border control at Macau was chaotic. More than a dozen citizens from Hong Kong were denied entry by Macau immigration because they posed a security threat to the city. The citizens included an independent filmmaker, an LGBT activist and even a travel writer, which has led many to question whether the Hong Kong government has a broad blacklist, which it shares with Macau authorities and Chinese authorities.

Both Macau and Hong Kong are special administrative regions of China, yet they do not form part of mainland China. They have their own distinct, borders, government, currency, police force, and even languages.

Premier Li Keqiang was in Macau along with a host of leaders from Portuguese-speaking countries in Africa and South America for a high profile trade conference that aims to chart a new course for the world’s most cash-rich casino-city. Nine of the barred Hong Kong citizens were activists who planned to protest during the Chinese premier's visit against an election framework imposed onto Hong Kong by a Chinese body.  While it is not unusual to see protesters blocked at the border before a planned event, some of the Hong Kong citizens were denied entry into Macau because they were former activists or registered members of student groups. A number of them have shared their stories on Facebook.

Fred Lam, a travel book writer, who was politically active in a preservation movement back in 2008, was surprised to see himself accused of posing a security threat at the Macau border on October 5. He was invited to Macau by a school to give a talk about his travel experience.

Roddy Shaw, an LGBT activist, was also blocked from entering Macau in October. He was worried that the political labelling would affect him from entering China and other Asian countries:

I share the same fate with Lam Fan Fred and could not enter Macau. I wonder if people who had the same experience could enter mainland China and Thailand? I have to fly to these two countries soon, pls advise!

Last week, Hong Kong student activist Joshua Wong was detained by Thailand immigration for a few hours and eventually deported. Thailand authorities explained that their decision was based on Beijing’s request.

Independent film maker Siuyea Lo who was a frequent traveler to Macau for work also faced the same situation on October 5. He wrote down the process on Facebook:

Today I was invited by friends from Macau to hold a film making workshop […] I read that Fred Lam was blocked from entering but still did not believe that I would enter counter the same situation. In the past few years, I have travelled to Macau for a few dozen times as actor for two films, Fig and A Summer Ghost Stories. I also frequently visit friends here and should not have any problem. The worst would be a brief interrogation.

I have a sense of the procedure. The e-channel check point would not let me walk pass and the immigration officer would take me to the room to fill up a form and answer some simple question. They should let me enter eventually. But I was wrong, after I filled up a form, I was taken to a corridor to fill up another form. Then I was asked to sign on the document [deportation notice]. I was shocked. They kept asking me to take the next ferry back to Hong Kong. “I double checked the photo, this is definitely him”, a police and an immigration officer were talking when they escorted me to the check out spot. The police told the immigration, “My feet are so tried walking to and fro today”, I guessed he must have escorted more than a few dozen deportees already.

Roy Tam, a pro-democracy district councilor was also blocked at the border on October 8. He and his family planned to have a day tour in Macau.

Derek Liu, a committee member of the Student Union of Polytechnic University, who had just visited China was blocked from entering Macau at Zhuhai and Macau immigration checkpoint on October 10. He was eventually deported to Zhuhai. The case showed that Macau’s immigration control during Li Keqiang’s visit is even stricter than mainland China’s immigration. Liu reported the situation on Facebook:

I don't understand. I am just a registered member of the student union and have clean record my entire life. Now I am blocked from entering Macau because of a Chinese leader's visit. Am just a tourist and you claim that I am posing threat to internal security?

The story is that my family have organized a trip to Zhuhai and Macau over the weekend. I was a bit worried that I might encounter problem at mainland China's immigration. But I just simply walked through the immigration. On the next day we carried on our trip to Macau but I was blocked from entering. Macau just gives up all its power to please the Chinese Communist Party. It is ridiculous that I can enter mainland China but not Macau.

The hostility of the Macau immigration has not only confined to Hong Kong citizens but also directed to tourists coming from “insecure” regions. When Miss Iran Melissa Razavi, who had just attended the beauty pageant Miss Global 2016 in the Philippines, entered Macau, she was held for more than two hours in the Macau immigration and asked to sign documents that would allow officers to go through her cell phone and luggage. She complained to local media outlets that she was treated like a terrorist. Several tourists from India were also interrogated for up to three hours and described the border inspections as “humiliating” and “discriminatory.”

Similar border control measure was also seen in December 2014 during Chinese President Xi Jinping’s visit to Macau. A large number of Hong Kong citizens who had participated in the pro-democracy protest for universal suffrage were denied entry at the Macau immigration. [Editor's note the writer of this article was also blocked from entering Macau in December 2014.]

The situation has probed many to question whether Hong Kong government has a broad blacklist, which it shares with authorities in Macau and China. As shown by Roddy Shaw's reaction to his deportation, there are fears that this list can even be used against Hong Kong activists in other pro-Beijing countries such as Thailand and Malaysia. Both countries had blocked Hong Kong student activist Joshua Wong from entering for fear that his visit would upset Beijing.