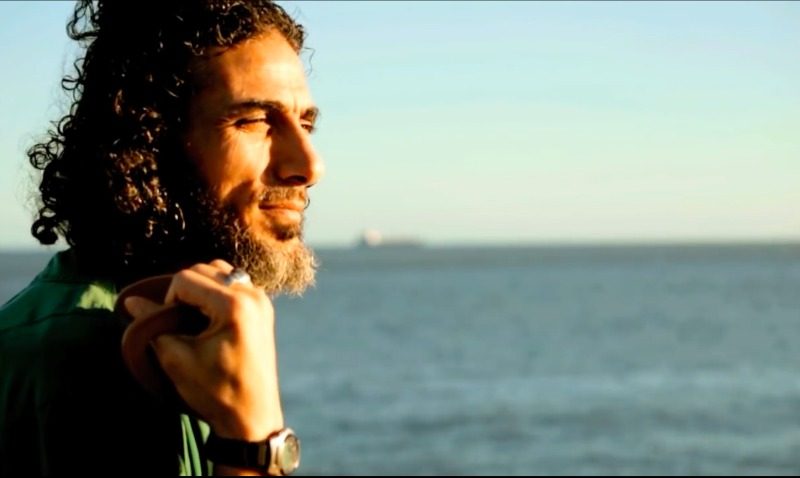 Jihad Diyab will need crutches for the rest of his life—a regular reminder of the torture he endured for 12 years, 8 months, and 7 days as an inmate in Guantanamo Bay, where the U.S. military operates a prison to detain suspected war criminals indefinitely and without trial.

Forty-three years old today, Diyab suffered permanent damage to his back while in the care of the U.S. government. In an interview conducted earlier this year in Uruguay, he told an an Argentinian journalist that Guantanamo even haunts the prisoners who are lucky enough to leave. The ones who make it out, he says, “are still U.S. prisoners inside.”

Diyab is one of the six Guantanamo prisoners (four Syrians, one Palestinian, and one Tunisian) who were freed and welcomed to Uruguay in December 2014, thanks to an agreement between U.S. President Barack Obama and Uruguayan President José “Pepe” Mujica.

Following a failed campaign to be reunited with his family, who fled from Syria to Turkey, Diyab declared a hunger strike in mid-August. On September 15, he told the BBC that he blamed the governments of Uruguay and the United States for his situation.

My health is very precarious. I’m sick, my energy is very low, and I personally hold accountable the U.S. and also the Uruguayan government, if I die.

In late September, after receiving a guarantee that his family was safe in Turkey, he resumed a liquid diet.

Diyab made headlines this June, when he fled Uruguay over the border into Brazil. The Uruguayan media called him an “ungrateful” “rebel” for leaving the country that welcomed him out of U.S. captivity. After a month of uncertainty about his whereabouts, Diyab turned up in Caracas, Venezuela, where he was detained for 17 days and then deported back to Montevideo.

The circumstances of Diyab's deportation remain unclear. Though officials have maintained that the former Guantanamo prisoners are now “free men,” the reality has been something different.

According to the newspaper Brecha, Uruguay apparently agreed to require that the freed prisoners remain in the country for two years before setting foot abroad, though top Uruguayan state officials initially denied that they accepted this condition.

Whatever deal Uruguay made with Washington, the fact remains that the prisoners released from Guantanamo have only been issued Uruguayan citizenship cards, which are not valid for foreign travel.

Today, public opinion on the former Guantanamo inmates has shifted, and even the former Uruguayan president who negotiated the prisoner release now says receiving the men was simply the price his country needed to pay in order to keep “selling oranges to the United States” and maintain good ties. 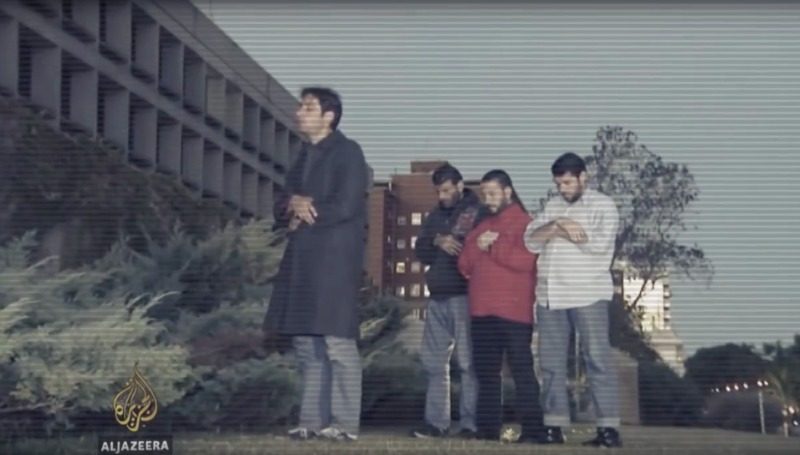 Four of the “Six of Guantanamo” protest in front of the U.S. Embassy in Uruguay. YouTube

Five months after arriving in Uruguay, four of the “Six of Guantanamo” staged a protest in front of the U.S. Embassy in Montevideo. Diyab was absent. The men had gathered after learning that Washington refused to provide them with financial assistance.

Writing in a blog, the men say they were dumped in a foreign country without employment, their families, or local language fluency. For this, and for the 13 years they spent locked up without charges, they deserve help from the government responsible, they argued in April:

They [the U.S.] should provide us with the means to live as normal human beings. They can’t just throw the mistakes on others, they should help us with houses and financial support. We are not asking the impossible from them they detained us for 13 years and they should help form some years to come. We think that this is the least they could do or we can ask for.

In a documentary about Jihad Diyab’s life in Uruguay, Anfibia magazine says the deal that secured his release was actually just an “informal” agreement with the United States. In other words, there are no official documents establishing the former prisoners’ rights. The only formal sheet of paper applying to the prisoners is a letter signed by U.S. State Secretary John Kerry that lists the six prisoners’ names and says “there is no information that [they] were involved or conducted terrorist activities against the U.S. or its allies.”

Anfibia's documentary also examines the lives of other former Guantanamo prisoners who have settled in Europe and Africa, where many are facing similar problems. One of these men, now living in Slovakia, told the magazine, “This is not freedom. We are still detained. I’ve left Guantanamo, but it's still in me—all the time.” Another prisoner in the film called his life after prison “a second Guantanamo.”

Since April, all the former prisoners in Uruguay except Diyab signed a deal with the Ecumenical Service for Human Dignity (SEDHU in Spanish) to receive financial support. Diyab refused to sign, saying he disagrees with the terms, which include housing and money for two years. Diyab says his back injury prevents him from working, and argues that the financial aid offered isn't enough to sustain himself, let alone his family.

Diyab was the only of the six prisoners who entered Guantanamo with a wife and children. Of the group, he alone says that he wants to leave Uruguay for an Arab country, where he hopes to settle with his family.

The next challenge Diyab faces is finding a new home. In an interview with the independent journal La Diaria, Senator Lucía Topolansky—who was imprisoned during Uruguay's dictatorship—promised that the government is searching for a solution:

What we have to do is search for a country that accepts him. And this is not just Uruguay's problem or his problem—it's the world's problem.

In September, Uruguay’s government released a note confirming that it is looking for a country willing to receive Diyab and his family. Officials say they are doing everything they can and ask Diyab to call off his hunger strike “to respect the principle of life.”

The negotiations, however, have made little progress.

According to WikiLeaks’ Gitmo Files, Diyab—the son of a Syrian father and an Argentinian mother—earned his living as a truck driver for many years in Syria. When he was arrested in Lahore by the Pakistani police in 2002, he was living in an apartment maintained by the Taliban and was selling honey to support his family.

The files link Diyab to al-Qaida members, identifying him as “high risk,” “high intelligence,” and “a threat to the United States.” He was allegedly responsible for forging documents and passports for the terrorist organization. Held in U.S. detention for well over a decade, he was never formally charged with any crimes. Diyab denies all the accusations.

Diyab's supporters manage a Facebook page and an Avaaz petition calling governments to take “immediate steps to have him reunited with his family in a country that can offer the family reunification.” In the meantime, repeating what he did for 13 years in prison, Diyab waits. In an interview with CNN, he declared:

I didn't want to go on hunger strike, but they have closed the doors on me and left me without any solution and this is the only path that I've found.

This week, after 54 days of hunger striking, Diyab was diagnosed with a “superficial coma.” According to the newspaper La Diaria, he previously signed a document refusing medical intervention, “even if his life is in danger,” but he later accepted intravenous feeding. The doctor who is assisting Diyab says his current health is “critical” with a “high risk of sudden death.” In addition to his deteriorating condition, his mediator with the Uruguayan government just left his case.

Nevertheless, the hunger strike continues as Diyab waits for a reply to his request.