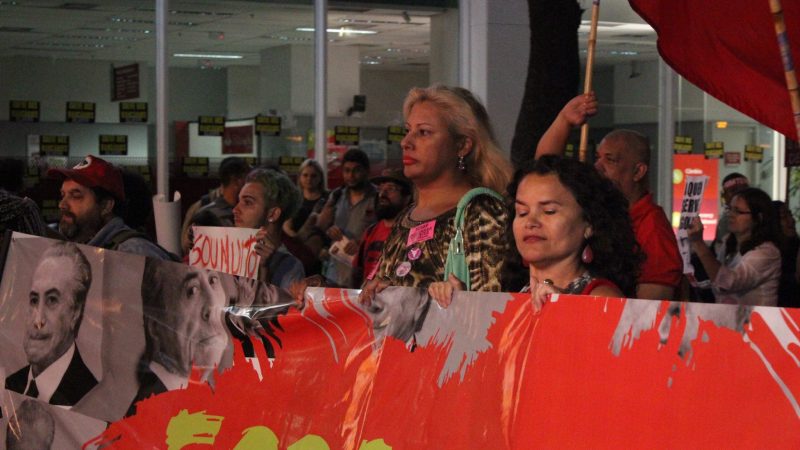 Indianara during a protest asking for the ousting of current Brazilian president, Michel Temer | Photo: Indianara Siqueira/Facebook/Used with permission

For a few years now, Brazil has shamefully led the world in the number of murders of transgender people. According to a study by Transgender Europe, four times more transgender people are killed in Brazil than in the second country on the list (Mexico) and almost eight times more than in the third (United States). An independent study, organized annually by a gay rights group in Bahia, counted that at least 318 members of the lesbian, gay, bisexual and transgender (LGBT) community were killed in Brazil in 2015, of which 37% — or about 117 people — were transgender.

The life expectancy of a transgender person living in Brazil in the 21st century is 30 years. To compare, the life expectancy of Brazilians in general is currently 75. Brazil doesn't have any laws that protect LGBT people from discrimination. Neither sexual orientation nor gender identity are included in the definition of a hate crime, and you'll find no option to check either on a police report, making it difficult for activists and NGOs to gather data. Life is especially hard for transgender people who earn a living as sex workers.

Amid such a problematic reality, a 45-year-old transgender woman has offered the world a glimpse of what life is like for trans people in Brazil. Indianara Siqueira ran on the left-wing party PSOL ticket in Rio de Janeiro's municipal elections on October 2. She received 6,166 votes and won an alternate seat (one of six designated replacements in case the voters’ first choices pass away or must abandon their post for any reason) in the local legislature. To celebrate, as well as to invite her voters to her inauguration ceremony in January, Indianara decided to share some of her life story on her Facebook page. So far, her post was liked by more than 3,100 people and shared more than 700 times.

Indianara was born in a medium-sized city, Paranaguá, in the southern state of Paraná during Brazil's military dictatorship (1964-1985). She started to take hormones at age 12. At 16, she left her grandmother’s home. Before turning 20, she had already been raped — committed by police officers in the small boarding house in São Paulo where she was living.

Indianara detailed the brutal conditions she and others like her were made to endure:

I moved to Santos, after all, as the song says: La miseré est plus légere au soleil (Misery is lighter under the sun).

There, while sleeping in the streets, Imet transvestites working as prostitutes who sheltered me and gave me a lamp post on a street corner where I could work. From a baker and pizza maker, I became a whore.

Almost everyday, we were taken by the “Frenchman” (an investigative officer), among others, by Abreu (a military policeman), among other military policemen, to the police station. We were beaten up because we existed. We were thrown into the police cars and vans as if we were garbage that couldn’t be recycled. We were lined up against the wall of the Santos’ Coliseum Theater and we had ammonia splashed all over our faces. It burned the eyes, the inside of the mouth. The thing is, when they went to pull out the ammonia, they also pulled out their guns, and if you ran, they'd shoot. You had to endure the ammonia burning you while they laughed. Sometimes, they would make you believe they were going to shoot us all. You learn your executioners’ shifts, but not to run away from them, you learn to prepare yourself psychologically to be tortured by them. You have to survive. But you leave home ready to die.

Indianara identifies as both a transgender woman and a transvestite. The word travesti in Portuguese, while derogatory in origin, has been reclaimed by the transgender community in Brazil, and many trans women currently identify as that.

She lived in Santos during the 1990s when the AIDS epidemic was hitting Brazil. She wrote that at the time, “the life expectancy of transvestigeneres” — a mash-up of the words “transgender” and “transvestite” in Portuguese — “was 25 years.”

AIDS came. Santos was known as the AIDS capital. They said I would die from AIDS.

My cisgender sister, who was married to a police officer, died from AIDS. Several of my friends died from AIDS. People used to call us the AIDéticos. They used to kick us out of bars, restaurants, afraid that we could contaminate the silverware. They were softly killing us socially. They had pleasure in doing so. And we didn’t have anyone to run to.

Sometimes we would revolt. The revolt leader was killed.

No one cried for us. On the contrary. To many families, as it still is today, it’s a relief when they kill us or when we die. 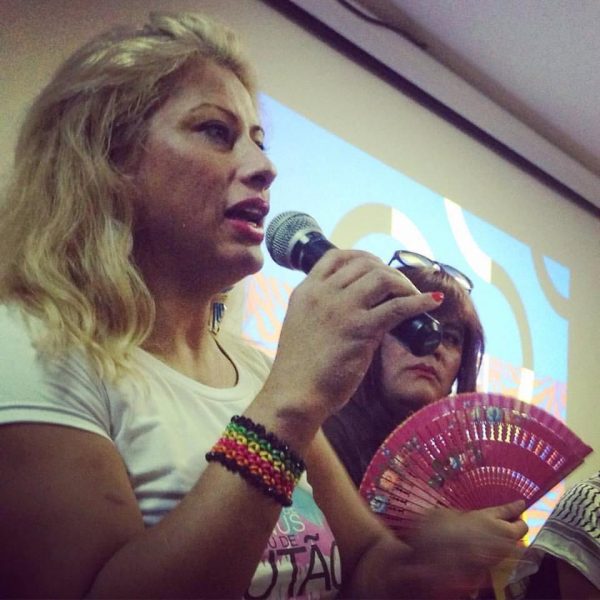 Indianara during a conference for LGBT rights | Photo: Indianara Siqueira/Facebook/Used with permission

Through her struggles, Indianara became an activist. In 1996, she was part of the LGBT rights group fighting for transgender people to have the right to use their chosen name — which was only officially granted by Brazilian law this year — as well as the right for a member of a same-sex couple to adopt their partner’s surname.

She also fought for trans women to be placed in the female wing of hospitals, or at least to be separated from men in the male wing.

And when she advocated against police abuse against LGBT people working on the streets, she became a target:

So, one day I was handcuffed to a lamp post in Santos, while the police officer played Russian roulette [with the gun] against my head. I was terrified and shaking and crying. I thought about my little brothers who depended on me surviving this shitty life, I thought about the transvestites who were sick and depended on me surviving. […] Yes, the noise of the gun’s cylinder spinning made me remember those who depended on me to live a little longer, even if I myself didn’t know if I’d have the chance. But the frightening noise of the gun would remind me that I was still alive. Or dead, even if I didn’t know yet.

Under threat, Indianara split her time between Rio and São Paulo for a while, working with support groups for transgender people and organizing LGBT rights marches. But as she rose to a prominent role in her community, the police abuse grew stronger:

In São Paulo, the police would put cocaine on transvestites’ cars and purses demanding that they pay 5,000 Brazilian reais [1,500 US dollars] so they wouldn’t be locked up as drug dealers. Many of them were. Their lives were destroyed in jail. Once free, they would become revolt as thieves who would even attack us, their friends, as if they blamed us for not being locked up as well.

Many were unjustly arrested. Some died in prison. Our torture should be told at public hearings about torture.

The harassment motivated many in Brazil's transgender community to organize on a larger scale. A national transgender conference was created and became a prominent annual event. Indianara had to leave Brazil, but she continued denouncing the police. As she explained, “the lives of future transvestigeneres depended” on her doing so. One of her recent projects includes preparatory classes for university entry tests specifically designed for trans students. 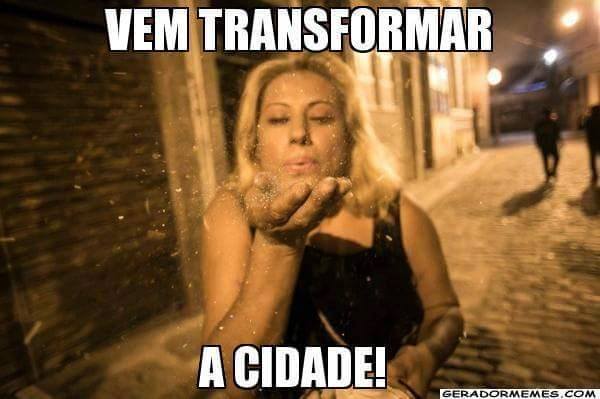 A meme from her campaign says: “Come transform the city” | Photo: Indianara Siqueira/Facebook/Used with permission

In 1992, a friend of Indianara, Kátia Tapety, was voted municipal legislator in the small town of Colônia do Piauí – becaming the first trans person to be elected to a political position. In the following elections, Kátia became the most voted legislator in that town. In the vote after that, she was elected vice mayor.

Twenty-four years later, the representation of transgender people in political offices remains low, but this year's elections had a record number running for office. At least 80 candidates were identified as trans; six of them were elected. To Indianara, who is celebrating her own alternate seat win, this was a victory:

We’ve sent a message: We are and will be in every space that has been denied from us.