Surrounded by Piles of Trash, These Two Classical Musicians Played Bach in Protest 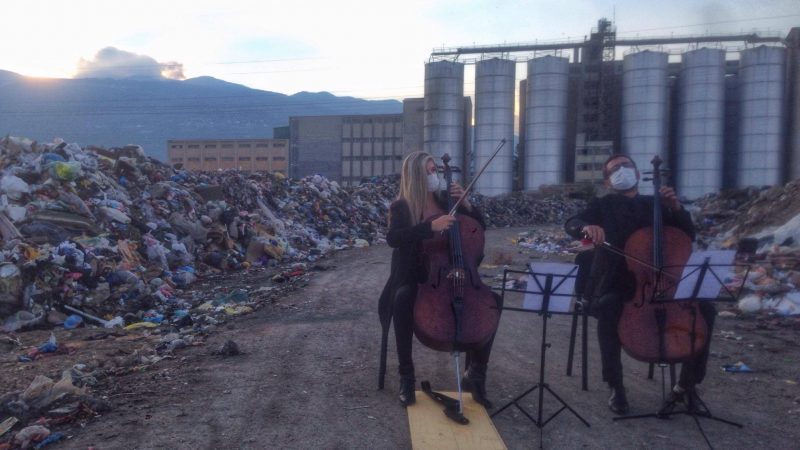 In their formal concert outfits, with masks on to protect themselves from the stench of decay, two classical musicians from Tetovo played Bach's famous orchestral suite “Air” to protest pollution.

The protest was organized by the civil society organization Eco Guerilla, which used a video made at the protest-concert as a tool for digital activism. The video went viral on different platforms, drawing attention to the problem.

Government inaction on the issue has incited a number of protests within the city and in the capital Skopje.

Factors contributing to pollution in Tetovo include lack of filters at the nearby metallurgical complex Jugohrom, the import of used cars from the European Union, the increased use of wood for heating, and the lack of garbage collection facilities, which forces people to dispose of their garbage at illegal dumps. The concert took place at the largest dump in the city, which has been ignored by authorities for years. It is at the entrance of the city, next to the big grain silos (seen at the background of the video).

This dump at the entrance of the city exists for a long time. The current Mayor, Ms Teuta Arifi, promised to remove it during her election campaign in 2013. She promised that she'll deal with this problem swiftly and efficiently. The dump is still here, until this very day, serving as WELCOME TO TETOVO sign, and serving as the center of our shame.

For quite a while, Tetovo has been listed among the most polluted cities in the world. Alongside Jugohrom, as the chief pollution source in the region, the dump also pollutes the city, enabling spread of diseases and infections.

Every October, Tetovo municipality funds the poetry festival named “Ditët e Naimit,” (“The Days of Naim,” in honor of Albanian poet Naim Frashëri). The organizers timed the protest concert as an interlude to this festival, “when many artists and art lovers are expected to visit Tetovo.”