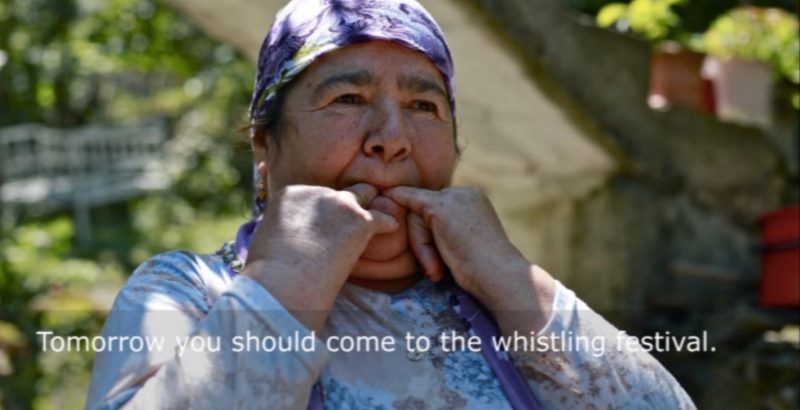 The following is a photo and audio partner post from EurasiaNet.org written by Alexander Christie-Miller. Republished with permission. Follow link for photo and audio.

In most ways, Kuşköy resembles countless other villages nestled in the Pontic Mountains along Turkey’s Black Sea coast. Its 500 or so residents cultivate tea and hazelnuts; there is one street with a baker, a butcher, and a few cafes. It is the sounds, not the sights, that make Kuşköy different. For generations, villagers have conversed using a unique form of whistled communication they call “kuş dili,” or “bird language” in Turkish.

The name Kuşköy itself means “bird village.” “Come over here for some tea!” Ibrahim Kodalak calls to his neighbor as he stands outside his home, which clings to a sheer hillside far above a valley. The 45-year-old hazelnut farmer is “speaking” in a series of earsplitting, warbling whistles that really do resemble bird song.

In fact, according to Kodalak, the melodies of local birds are often similar to kuş dili; a morning song of the blackbird is the same as a famous verse in the Quran, he claims. “Electricity only came here in 1986, and before that it was hard to communicate over long distances; we really needed bird language,” Kodalak said, reverting to Turkish.

Like other forms of whistled communication, kuş dili arose in a region where the rugged ground and sparse population made travel difficult even over short distances. A whistle can reverberate for more than a kilometer, according to Kodalak. “If you can’t make your voice heard over a long distance, you could also make a chain with different people relaying the message.”

Most villagers believe kuş dili arose about 400 years ago, although no one knows for sure. The “language” is, in fact, a whistled dialect of Turkish, with each syllable rendered in one of about 20 different sounds. Typical subjects include invitations to tea or to help with work, notifying neighbors about the arrival of a truck to pick up the harvest, or announcements of funerals, births and weddings.

The slow process of modernization in the village helped preserve kuş dili, but, in recent decades – particularly since the arrival of cell phones – the language has been in decline, said Kuşköy’s mukhtar, or village headman, Metin Köçek. “Now we have roads, electricity and phone lines,” Köçek said. “In our childhood, the bird language was used a lot in daily life. Now we meet the same needs by using a cell phone.”

Technology is not the only threat. As in other parts of rural Turkey, many young people are leaving Kuşköy in search of better opportunities in the country’s booming cities. “Lack of opportunities is a general problem in our area,” commented Mehmet Fatih Kara, the governor of Canakçı district, within which Kuşköy is situated. “Young people go and leave the elderly behind, and only visit on vacation.”

For the past 15 years, the village has held an annual festival to promote the language. There are whistling displays, and a contest between the finest whistlers, in which they relay instructions to each over the valley before a panel of judges.

“Our purpose is to promote bird language to our country and to the world,” said Şeref Köçek, organizer of the festival, and head of the village’s Bird Language Association.

Around 2,000 people attended this year’s festival, on July 8, which had an emphasis more on local music and dancing than on whistling. Almost all were from the nearby area, or were relatives who had returned specially for the festival.

Kara believes that kuş dili could be used as a means of boosting the local economy and arresting the current exodus to the cities. “I want to use tourism to turn this language into an economic source for the region,” he said.

Recently, he approached Türk Telekom, the former state-owned telecommunications company, to provide sponsorship for the festival. At the time of publication, Telekom representatives had not responded to the request.

The funding would be used to improve roads in the area, and move the festival to a more picturesque location on the grassy plateau above the village, he said.

Whether any of it will help reverse kuş dili’s slow decline remains to be seen.

But for Bird Language Association Director Seref Köçek ‘s brother Rıfat, a 38-year-old Istanbul firefighter who terms kuş dili his “mother tongue,” Kuşköy has a obligation to preserve its cultural heritage. “[W]e need to keep the language alive out of respect to our ancestors,” he said. “They created it, and they never knew that one day it could make us famous.”