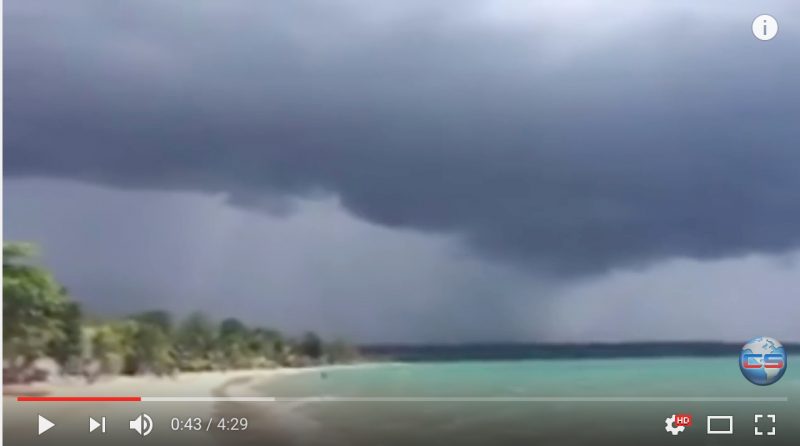 At the beginning of October 2016, as Hurricane Matthew made his way at snail's pace across the southern Caribbean, stalled and then turned northwestwards, the Jamaican government sprang into action, while the Meteorological Service of Jamaica kept a watchful eye on the storm's somewhat erratic path.

But some Jamaicans were unimpressed at the way in which communications were handled. Did Prime Minister Andrew Holness hog too much of the limelight? Was Jamaica over-prepared for a storm that hardly affected the island?

Over the two or three days the storm was approaching the prime minister stepped up his already high-profile presence on social media, sharing his briefing with members of parliament on Facebook Live. He tweeted video clips and photographs of his helicopter tour of the island, as well as snapshots of his interviews with local and overseas journalists:

He also tweeted photos of his visits to the Office of Disaster Preparedness and Emergency Management (ODPEM), the government agency charged with the responsibility of keeping citizens safe at times like these:

Now at @odpem to get an analysis and update on the preparation and state of readiness for #HurricaneMatthew. pic.twitter.com/O2l5lGCbeX

Holness’ wife, Juliet — who is also a member of parliament — tweeted her concern about a badly damaged road that had not been fixed before the storm:

Currently at the Gordon Twn breakaway with the NWA working on a temporary solution to prevent further damage during #HurricaneMatthew pic.twitter.com/lZ3ul5IDDw

Did the Met Service miss the mark?

The country's meteorological service did not emerge unscathed either, with some Jamaicans feeling the agency had let the prime minister's office usurp its territory. One Jamaican human rights activist was concerned about the lack of social media presence of both the ODPEM and the “met office”, tweeting:

Andrew replace met office? Mi think de least him could do is get de met office back online (social media in particular)

For its part, the meteorological service addressed its meagre social media presence in a radio interview:

We are in discussions to have @MetserviceJA back up (ACTIVELY) on twitter.

There are some people who are angry with the government and the weather forecasters because they advised people to prepare for a possible encounter with Hurricane Matthew, and in the end Jamaica hasn’t been severely impacted. Based on the ongoing information available from meteorologists locally, regionally & internationally, Jamaica was in the cone of possible impact of the system, which on Friday night reached the level of a Category 5 hurricane, the highest strength on the Saffir-Simpson Scale.

The government will obviously need to review its actions over the past week or so, to identify any flaws in its response and what improvements can be made. Meteorologists will definitely review the data about Hurricane Matthew for years to come, seeking to understand this unpredictable storm among unpredictable storms. And all of us can review our own responses to see what lessons there are for us to learn about how best to protect ourselves and our families.

As we watch Hurricane Matthew battering Haiti and Cuba, let’s remember that we were facing that possibility and if the track had wobbled a bit to the west and Jamaica had been hit, would we have wanted to be prepared or not?

Opposition leader Portia Simpson Miller, meanwhile, tweeted about her visits to her own constituency:

Touring my constituency with Mayor Brown Burke. Assistance is being given to those who need additional support #MappingMatthew pic.twitter.com/vWcrrEdEFO

However, her assistant accused the prime minister of wearing a cap with a party slogan in a tweet. On closer inspection, the cap had “Jamaica” emblazoned on it (but green is the color of the Jamaica Labour Party, which Holness heads). One journalist shared:

Director of the Disaster Risk Reduction Centre at the University of the West Indies (UWI), Dr. Barbara Carby, was also unhappy, accusing the government of departing from accepted protocols by sidelining ODPEM — the government agency she formerly headed — at a pre-Matthew press conference. After the storm, the opposition People's National Party echoed similar sentiments.

Some netizens wondered whether this kind of political presence could have something to do with local government elections, which are expected to be held before the end of the year.

‘An ounce of preparation is worth a pound of recovery’

Overall, Jamaicans seemed quite satisfied with the government's level of preparedness. One young lawyer tweeted:

I salute our Met Office and our government for doing everything they thought necessary to prepare us, so we could prepare for the hurricane.

Dear PM sir @AndrewHolnessJM, it may be a thankless job from some people but I THANK YOU. This is life now->
Storm a come we must be ready!

Meanwhile, as Hurricane Matthew continued to batter the Bahamas and threatened Florida's east coast on Thursday October 6, the top story in evening newscasts was a large hole that had emerged along a major thoroughfare in Kingston, causing traffic gridlock. Development consultant Jan Voorduow, formerly based in Haiti, commented on the road works:

@Petchary Can you imagine? While entire cities were destroyed 200 miles away…

Traffic rough in Kingston.. but small matters… compared to tragic loss of lives 😢 and destruction in #Haiti 🇭🇹 #reachout #givethanks

Jamaica has to get used to this new normal that whenever the threat of a natural disaster occurs, we have to be prepared. pic.twitter.com/sFbBcztB2z

On his busy Facebook page, the prime minister offered words of sympathy and pledged support for Jamaica's Caribbean neighbors:

I am deeply saddened by the destruction caused by hurricane Matthew and extend deep sympathy on behalf of the government and people of Jamaica. I also extend best wishes for a speedy recovery from the effects of this terrible storm.

Even as ODPEM makes arrangements to send personnel and supplies to Haiti, the country that suffered the most damage and loss of life from the storm, it is evident that hurricane preparedness is always a complex and costly logistical issue for Caribbean nations. And in the case of Jamaica, Hurricane Matthew was quite a communications challenge — and a serious test of citizens’ patience.