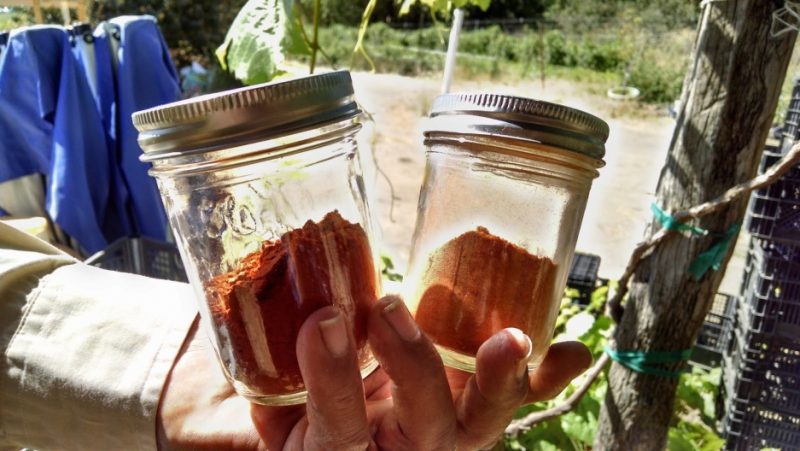 Menkir Tamrath holds up two jars of Ethiopian spice blends, Berbere and Mitmita, from plants he grows on his farm in Sunol, California. Credit: Meradith Hoddinott

This report by Meradith Hoddinott appeared on PRI.org on September 30, 2016. It is republished here as part of a content-sharing agreement.

At the edge of his farm, Menkir Tamrat walks over to a pepper plant and pulls back the dark green leaves to reveal dozens of shiny red peppers.

“Looks like we have a whole bunch of ripe ones, red ones, ready to be plucked,” he says as he rubs his hands together.

Over the next few weeks, Tamrat will harvest the long rows of peppers. Then he’ll dry them, crush them and make them into spice blends essential to Ethiopian cuisine. Tamrat includes over a dozen separate ingredients in these blends and he focuses on balancing heat and color while building flavor.

Tamrat wasn’t always a farmer. He grew up in the countryside of Ethiopia in the 1960s. Then, in the early 1980s, he came to the San Francisco Bay Area in California, got his MBA and started a career in high-tech management. The food from his homeland was never far from his heart, but when he tried to recreate it with local California ingredients, something was missing. 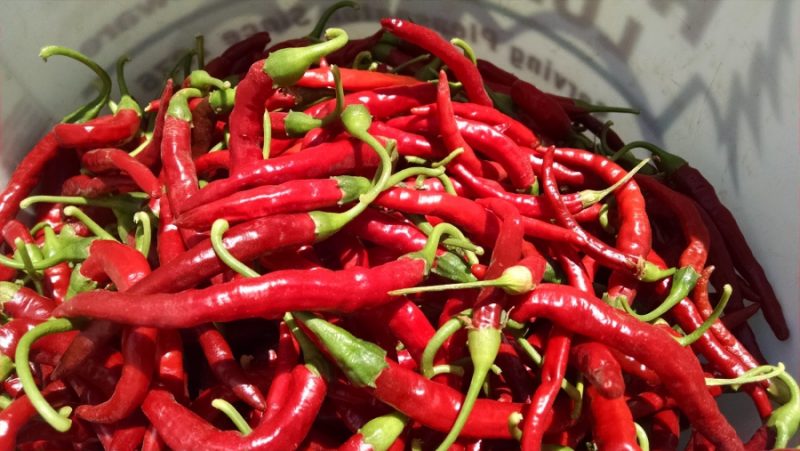 “Because I couldn't create the chili powder from off the shelf chillies,” Tamrat explains. “It's a hit and miss, how do you know which one might be the closest?”

So Tamrat went back to Ethiopia and brought back the seeds he needed to start a garden. He filled his yard with herbs and vegetables and peppers, and he found that these fresh flavors made all the difference.

“This leaf called koseret,” Tamrat says, holding up a stem of dried herbs. “You can never find it. It's not used in any other cuisine. And it's got its own unusual taste.”

For decades, Tamrat’s garden was just a passion project. But when his tech company downsized in 2009, Tamrat took the opportunity to grow these Ethiopian flavors on a larger scale. He connected with a local farm. By that summer he had 5,000 pepper plants taking root in California soil.

Once Tamrat had a steady supply of the peppers, he poured over books, articles and recipes to search for the perfect spice blend. But when he started mixing flavors together, he realized he was missing a major secret ingredient: the mom touch!

“Ethiopian cuisine is like, ‘So-and-so's mom is known for her such-and-such,'” Tamrat, says with a smile. “And she may have one little secret thing that she adds in it so you never get the same thing from two families making the same stew.” 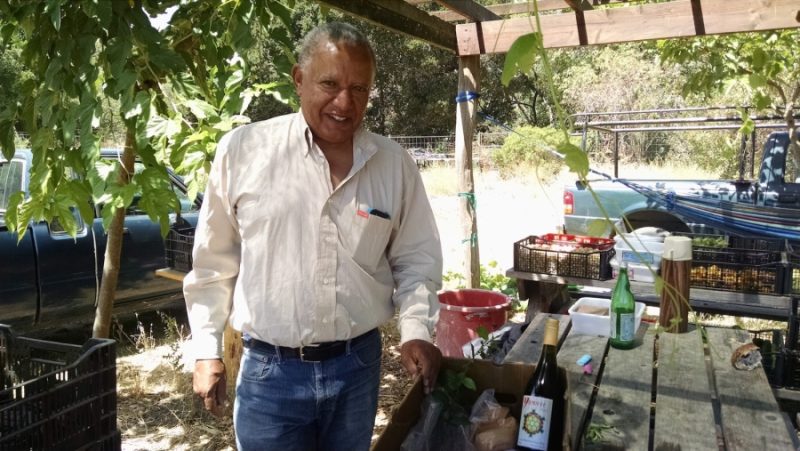 So for help, he turned to a friend of his mother's who lived in Oakland. He also followed his mother-in-law around the kitchen with a notebook when she visited from Ethiopia.

He finally came up with a spice blend that was worthy of home.

“I even took some samples to a restaurant in Ethiopia,” Tamrat says. “Just to show off and say, ‘Why don't you guys taste this?’ And the lady just could not believe it that I brought this from America and a man made it!” 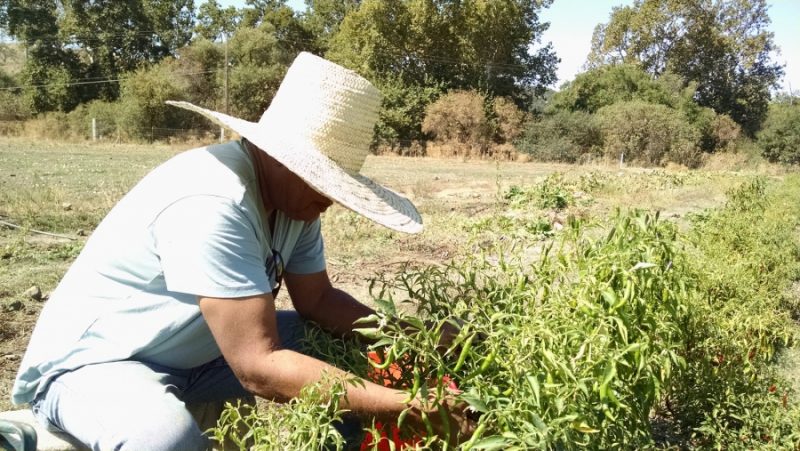 Menkir Tamrath picks peppers at his farm for his spice blends. He says when he was a kid in Ethiopia his father never set foot in the kitchen. Credit: Meradith Hoddinott

Tamrat sells his spices to restaurants in the Bay Area through his company, Timeless Harvest. But this season, he split his time between California and Ethiopia, where he’s diving into a new project.

He started a farm back home to grow western crops like Swiss chard and Tuscan kale (vegetables that are extremely hard to find in Ethiopia). The capital, Addis Ababa, is headquarters for many international political organizations. And Tamrat hopes to tap into a blossoming market of high-end Western restaurants that’s sprung up there over the past decade.

While it may seem that Tamrat is being drawn back to his homeland, he believes strongly in being a member of two countries.

“I am fortunate enough to say that I have two countries,” he says. “And I don't have to choose one over the other. Different opportunities are provided by the two different places. I think more people should have two different countries. More than one, anyway!”

This story first appeared on KALW.