“With a Nobel, but Without Peace” 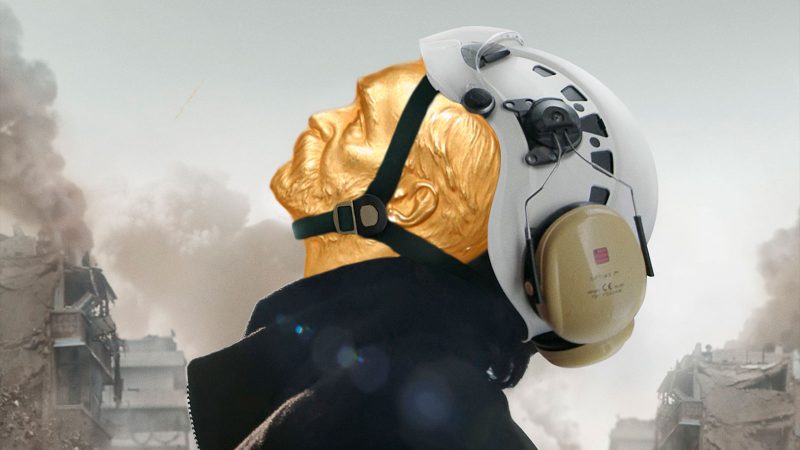 Colombian President Juan Manuel Santos was awarded the Nobel Peace Prize on October 7, 2016 for his efforts to put an end to more than five decades of conflict between his government and the country's oldest insurgent group, the Revolutionary Armed Forces of Colombia (FARC).

The win came as a surprise to many.

In a referendum held earlier this week, Colombians rejected Santos’ peace deal. If the deal had passed the vote, it would have indeed marked an end to a war that has claimed more than 220,000 lives since 1958.

My dad says: with Nobel, but without peace

Thousands of kilometers away, Syria's Civil Defense volunteers, widely known as the ‘White Helmets‘ because of their white helmets worn during rescue missions, were seen as the choice of many. They are seen as heroes in a war that has claimed more than 470,000 lives in five years.

As soon as the Nobel Peace Prize was announced, the White Helmets congratulated the president and people of Colombia.

The award for Santos excluded FARC commander Rodrigo Londondo, alias “Timochenko”, also a signatory of the failed accord. The Nobel Peace Prize committee emphasized that this prize also pays tribute to the people of Colombia.

You can hear the phone call between the Norwegian Nobel Committee committee and President Santos below:

Twitter was quick to question the award given to Santos for trying to bring peace to his country:

Man, the Nobel committee seems to be giving out a lot of Gold Peace Stars for Participation recently. https://t.co/3FId1eC9Jj

The recognition to peace that is yet to come is unbelievable, to some. Angelica Casallas, from Colombia, compared the win to Macondo, a fictional town in One Hundred Years of Solitude. The novel was written by Colombia's most famous writer Gabriel García Márquez.

Gabo (Gabriel García Márquez) won the Nobel for Macondo, Santos for governing it.

This is proof that Colombia is the cradle of Magical Realism. While the country is on the brink of (possibly) going to war again after the failed referendum, the President wins the Nobel Peace Prize.

Others used the famous meme that circulated after Miss Colombia was incorrectly called the winner of the Miss Universe pageant, earlier this year, to illustrate the controversy that could rise between the “No” supporters and the recently awarded president:

When you win the referendum / When they give the Nobel to Santos.

Some Twitter users, like Erik del Búfalo, showed relief that the award wasn't handed to the FARC as well:

At least they didn't give it to Timochenko too. In this time in humanity, one could expect this kind of stuff.

We hope that the Nobel peace prize gives President Santos strength to give life to the final agreement and dignity for all Colombians.

There were those who were optimistic that the prize could boost the peace process:

Nobel really helped Oscar Arias in 1987, when Reagan admin was bitterly opposing his Central Am peace effort. Dynamic could be similar now.

The Nobel Peace Prize, as Seen from Syria

Countless people took to Twitter to express their love to the White Helmets, saying that they won the ‘hearts of the world’ even though they didn't win the Nobel Peace Prize. All of the following tweets, by Syrians and others, were retweeted by the White Helmets themselves.

Syrian response to @SyriaCivilDef not winning the @NobelPrize: “their prize is in heaven, not in this world. Their mission is saving souls.”

Well deserved, despite the disappointing referendum result. Sad that the @SyriaCivilDef didn't get it, they need the support even more now. https://t.co/22eVo241Qg

They faced bullets, bombs, torture & genocide. We are lucky that we had heroes living among us who decided to save lives. @SyriaCivilDef

Head of @SyriaCivilDef Raed Saleh tells @AFP the best prize his group could receive is what they do every day — saving a life. #Nobel pic.twitter.com/JSp5zIqZ8G

What a class act! The White Helmets congratulating the winner of the Nobel Peace Prize. @SyriaCivilDef you are heroes. https://t.co/PjYclAz6hD

Congrats for the Syrian @SyriaCivilDef heroes for winning our hearts and losing a stone prize. You are our #NobelPeacePrize heroes

Palestinian-Syrian caricaturist Hani Abbas drew the following in honor of the White Helmets: 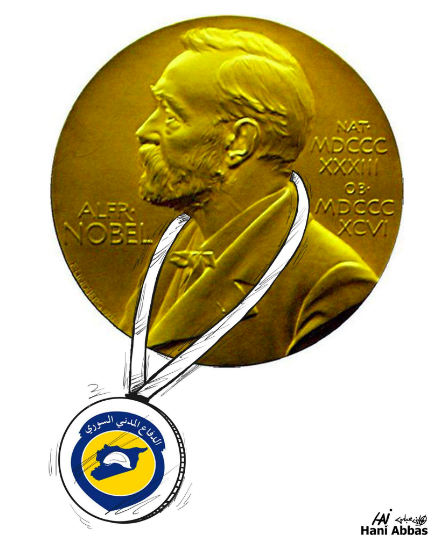 Many had hope the prize would put the organization in a protective spotlight. UK-based activist and editor at Pulse Media Idrees Ahmad tweeted:

And indeed, the White Helmets’ center in Hama, in West-central Syria, was targeted today.

At the time of the @NobelPrize announcement, @SyriaCivilDef center targeted in Hama. Back to work. pic.twitter.com/DsOE0WRbs3

They also lost another volunteer in Daraa, southwestern Syria.