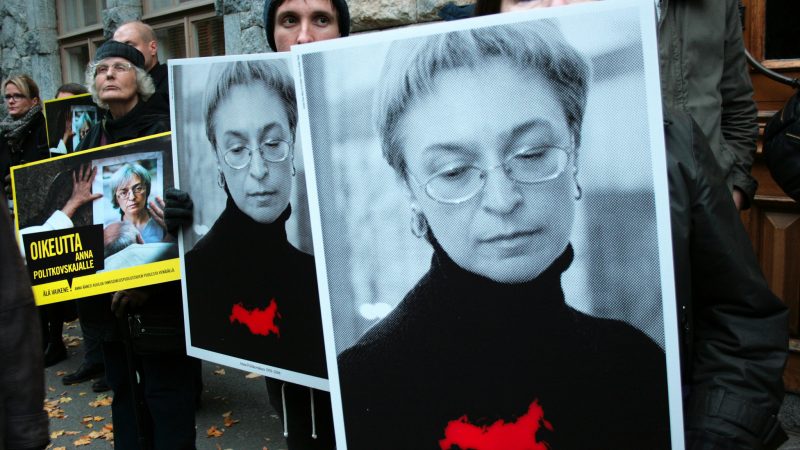 Ten years ago today, Anna Politkovskaya, one of Russia's leading investigative journalists, was shot to death in the elevator of her apartment building in Moscow. Her murder and the state's inability—or reluctance—to prosecute those responsible have become symbolic of the the danger of working as a journalist in Russia. Despite the conviction of five men on murder charges in 2014, it remains unclear to this day who ordered Politkovskaya's killing.

Politkovskaya is remembered for her fearless investigations of human rights violations—most famously in the North Caucasus, where she covered the Second Chechen War. On Friday, Novaya Gazeta, Politkovskaya's newspaper, invited people to gather at the entrance to its office building, where a plaque commemorates her life and work. Radio Liberty/Radio Free Europe captured the scene earlier today.

Novaya Gazeta also published a video titled “The Ringleader is Still Missing,” a powerful indictment of the authorities’ failure to find—or, perhaps, to disclose—who ordered Politkovskaya's murder. RuNet Echo translated the placards that the members of Novaya Gazeta's staff are holding up in the video below.

May 31, 2011: Rustam Maxmudov is arrested. The ringleader is still missing. August 22, 2011: a witness in the case, Police Lieutenant Colonel Pavliuchenkov is arrested as the organizer of the murder. He confesses. But he doesn’t say who ordered the killing. According to the terms of his plea bargain, Pavliuchenkov is supposed to say who did. He doesn’t. Anna’s children demand that the plea bargain be voided and he be judged without leniency. The court does refuses their demands. The ringleader is still missing.

December 14, 2012: Dmitry Pavliuchenkov is sentenced to 11 years in a penal colony for killing Anna Politkovskaya. The ringleader is still missing.

June 3, 2013: a second trial begins. The ringleader is still missing.

Arkady Babchenko, a war correspondent and ex-soldier who served in the First Chechen War, tweeted a picture of Politkovskaya in Grozny, Chechnya, in 2005.

Many shared their favorite memories of Politkovskaya, often interviews highlighting her dogged pursuit of the truth—here calling attention to the special services’ role in the 2002 terrorist attack on Dubrovka theater, which resulted in a hostage crisis.

I advise everyone to watch this. Anna Politkovskaya tells Vladimir Soloviev (Russian journalist) about the implication of special services in the terrorist attack on Dubrovka.

In her last interview, Anna Politkovskaya spoke about Kadyrov: two days later she was shot at her home in Moscow.

Others called attention to the fact that Politkovskaya was killed on Putin's birthday—a coincidence that resonates because of allegations of official involvement in her murder and coverup.

Ten years ago, on October 7, Anna Politkovskaya was killed. The ringleader is still missing. Putin celebrates his birthday on this date.