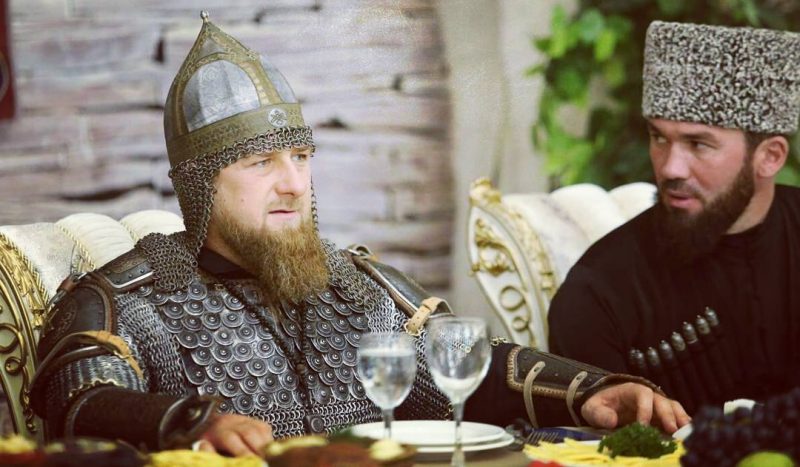 As you can glean from a peek at his Instagram profile, Chechen leader Ramzan Kadyrov structures his life around sports and exercise.

Kadyrov's feed is full of posts like this one on September 24, where he boasts about always finding time in his busy schedule to maintain his physique. With such an integral focus on fitness, it comes as no surprise that the long-time head of Russia's Chechen Republic has also instilled these virtues in his children, Eli, Adam, and Akhmad; he sometimes posts about their workout regimens and preparations for competitions.

Despite this regular publicity on social media, Kadyrov still managed to shock people throughout Russia, when his three young sons appeared as participants in a recent mixed martial arts (MMA) tournament hosted in Grozny. The spectacle was arranged to celebrate Kadyrov's latest inauguration, which coincided with his 40th birthday.

Videos posted on Instagram show his ten-year-old son Akhmad delivering a knockout blow to his opponent, another child from Sochi. His other sons also reportedly achieved victory over their respective opponents in similar matches.

Almost immediately, lines were drawn in the sand as many in Russia weighed in on whether or not such young children should participate in fights. Russia’s new children’s rights commissioner, Anna Kuznetsova, entrusted her Chechen counterpart to investigate the circumstances of the tournament. Fedor Emelianenko, the president of the Russian MMA Union and a world-champion fighter himself, condemned the tournament, claiming that the fights could cause children irreversible physical and psychological damage. Former world-boxing champ and current Duma deputy Nikolai Valuev agreed with Emelianenko's assessment:

All sports are good for a specific age group. Fedor was absolutely right when he said that it’s too early for children to be involved in these fights, and you can trust the word of a person who really knows what he’s talking about. MMA rules allow for ground-and-pound [fighting on the ground], and this is inexcusable for children. I have nothing against MMA; if children are involved, there should be some specific limits for them.

In fact, MMA rules stipulate that children can participate in fights once they have reached the age of 12, and only with suitable equipment. None of Kadyrov’s children are older than 10, and it would seem that the necessary equipment was not used in the October 4 tournament.

The referee at the match later declared that this had been a demonstration, and not a real match. He suggested that it was so well orchestrated that many simply misinterpreted the “performance” for reality. The referee discussed safety equipment, too, saying the children would have been decked out in protective gear, if the “fights” had been anything but staged.

Abuzaid Vismuradov, the head of the fighting club that organized the MMA tournament, accuses Emelianenko of lashing out at Kadyrov because Emelianenko wasn't invited to the event.

Kadyrov’s cousin, former Chechen Deputy Prime Minister and current Duma deputy Adam Delimkhanov, has also stepped up to defend his nephews’ participation in the fights, promising to make Emelianenko “answer” for every word he's said about them. Delimkhanov rebuffed Emelianenko’s statements about the effects fighting has on children, claiming that Emelianenko has no moral right to talk about how to raise children, considering his own brother beat and raped a woman in 2014.

Emelianenko, who originally published his criticism of the fight on Instagram, subsequently deleted his comments and later reuploaded the same text, albeit with a different photo.

In the early morning hours of Thursday, October 6, Kadyrov responded directly to Emelianenko with a new Instagram post, shaming the president of the Russian MMA Union for “posting a photo of other people's children” and attaching “unflattering comments.” Referring to Russian equivalent of the Western European knight-errant, Kadyrov wrote, “Fedor, you're out of line! Russian bogatyrs don't act this way!”

Kadyrov also included a snazzy video montage of children abusing drugs and alcohol, followed by footage of his sons wailing on opponents at the MMA tournament, ending with shots of the boys playing video games and carrying their trophies. The final frame features a simple question: “Drug addition or a healthy lifestyle?

Kadyrov is no stranger to controversy, both on Instagram and in the public sphere. His style of rule has unnerved many who have later decried what they see as “Chechen exceptionalism” within the Russian Federation, whereby the Chechen republic operates outside the bounds of the federation’s laws.

As a the newspaper Novaya Gazeta wrote in a special report about Kadyrov’s special “contract” with Moscow:

The Constitution guarantees the rules of the separation of power as one of the foundations of Russia’s system of government. But Ramzan Kadyrov has shown the federal government, as the saying goes, in layman’s terms: the Constitution of the Russian Federation has no power on his territory.

With focus on Kaydrov’s disproportionate influence and power in Russian politics renewed as the case against Boris Nemtsov’s alleged murderers goes to trial, for some, this episode serves as a reminder that there seem to be two sets of rules in the Russian Federation: one for Chechnya, and another for the rest of the country. Dmitriy Peskov, the Kremlin’s official spokesman, has also added his two cents, criticizing the television broadcast of the tournament but stressing that there weren’t many people who saw what actually took place. Thus continues the Kremlin’s cautionary politics towards Kadyrov and Chechnya as a whole.