Why Is Indigenous Singer Delfín Quishpe Such a Polarizing Figure in Latin America? 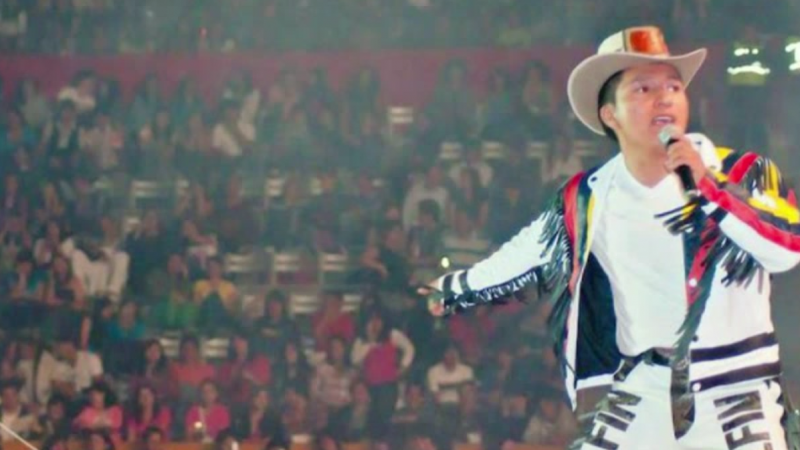 Delfín Quishpe. Screenshot from one of his songs shared on YouTube.

Many in Latin America have heard of this singer, or at least have seen his videos on the Internet. From the beginning of his music career, Delfín Quishpe has been a rebel in his fashion and music choices. The song that went viral and made him famous both within and outside of Ecuador was Torres Gemelas, or “Twin Towers” in English. In this song, Delfín tells the story of his sweetheart, who had traveled to the United States and then died in the attacks of September 11, 2001. “Who knows the truth? Who did it, and why did they do it?” Delfín asks himself at a certain point in the song's music video. Those questions were what millions of people had contemplated since the violence occurred, but the song nevertheless earned him a flood of mocking.

There is a reason for this. His music aside, Delfín has faced a challenge since the beginning of his career: being indigenous while asserting his own style.

A total of 7% of Ecuador's population is indigenous, and Delfín, who is Quechua from El Chimborazo area, is probably one of the greatest champions of the country's indigenous groups within the music world. Torres Gemelas, according to Delfín's own account on the news portal Vice, was not given airtime on radio or television due to the author being “small and brown”. He invested $1,500 into producing his music video and a friend suggested that he try the free platform YouTube. Today, Torres Gemelas has 14,571,988 views — and that's not even the official version, but one uploaded by a YouTube user named Donmaco. In 2011, he was nominated as the “Web Celebrity of the Year” by the TV channel MTV Latin America, and in 2012 he participated in the second broadcast of YouFest, celebrated in Madrid.

‘When the Trembling Stops’

Delfín recently created a buzz within the Latin American community once again with his reinterpretation of the song Cuando Pase el Temblor (“When the Trembling Stops”), by the legendary Argentinian band Soda Stereo. Delfín, now known as the creator of “Andean Techno-Folklore,” performed his cover on an Ecuadorian television program a week after the second anniversary of the death of Soda Stereo's Argentinian singer and leader Gustavo Cerati.

As expected, he received comments for and against his performance, and for several days his performance intensified the debate over what is good or bad in the realm of music. This is similar to what happened a few years ago with Wendy Sulca, a Peruvian singer of Andean music, and her version of Like a Virgin (one of the biggest hits of US singer Madonna).

‘They judge because they do not know’

What is Delfín like, beyond the YouTube videos? How does he receive criticism? After a week of trying to find him and sending him several messages via social networks, Global Voices was able to get in contact with the singer. From his native city Guamote (an Ecuadorian canton of the Chimborazo Province), he answered some questions.

GV: When did you start with your music?

Delfín Quishpe (DQ): I have been singing since I was a little boy, but at a professional level I have been singing since 2000. In that year, I recorded my first album, but it was on my third record that the success of Torres Gemelas was born; few people know that the melody for this song was already prepared before 2001 and was called Cuando me voy a Guayaquil [“When I go to Guayaquil”].

GV: Your latest work, the cover of Cuando Pase el Temblor by Soda Stereo, has got many people talking and received quite a lot of media coverage. Many are wondering if you had known of this rock band, one of the most important in Latin America, for a while.

DQ: I was always a fan of Soda Stereo and also of who Gustavo Cerati was in life, and from this my musical appreciation for international artists was born. I also admire the Guatemalan composer Ricardo Arjona, and have even recorded the song El Mojado [“The Wetback” — a pejorative term for migrants in the US]. You can find it on YouTube.

GV: What do you think of the criticisms you are receiving because of your latest work?

DQ: I believe in free expression. Anyone can talk out of the back of their heads, whatever, it comes from their gut and I don't resent it nor get excited about it. I am a very focused person in what I do and I enjoy doing what I like.

GV: The “Twin Towers” video is still getting comments on YouTube, despite having been published 10 years ago. However, not all the comments are good. How do you feel regarding the reception of indigenous artists in Latin America? Do you notice any racism against what you do, or against singers like Wendy Sulca and the Tigresa del Oriente (another YouTube artist from Peru who also went viral in the region)?

DQ: It doesn't matter to me where I come from and who I am, because I have my identity, my nationality, and my culture well defined. I am an Ecuadorian singer, a native of Chimborazo. Why should I worry about what people say? Everyone has their culture. That is what I want them to understand, if that is what they want. If not, that doesn't concern me, either. I have a firm stance and that's why the criticisms don't bother me. The people who are racist don't know the country. If we talk about the American continent, there are thousands of cultures, traditions, and languages. We respect each other and want to respect anyone who wants to question that. They judge because they do not know.

‘Although opinions are divided, all of them stem from racism’

Guayaquilian reporter Ivonne Lago, who works for Diario Extra, also spoke with Global Voices and gave his point of view regarding the phenomenon that is Delfín Quishpe:

Although opinions are divided, all of them stem from racism. Perhaps because it is still believed that the indigenous should only make Andean music by using an excess of quenas [indigenous flutes], flutes, and rondadores [Ecuadorian panpipes]. Paradoxically, some of these instruments can be heard on the original version of Cuando Pase el Temblor, recorded in Cuzco, land of the Inca Empire. And others [have such opinions] because they see Cerati as an idol, a legend, whose lyrics can't be tarnished, or worse, be an object of ridicule. Even though that might not have been Delfín's intention, the fact that an indigenous person dared to cover the song sparked the criticism and mockery. In my opinion, Delfín didn't do a bad job. It was very polished and the arrangements were well done.

The Internet acts like a big window for analyzing how the public receives content. On YouTube, one can find comments like “Delfín you should not be Ecuadorian,” “I didn't know the indigenous could sing,” or “God help us, don't let Delfín come back to sing.”

The fact is, beyond the stereotypes, beyond what is considered good or bad music, Delfín is good at unsettling people. It reflects how the feelings of superiority and inferiority are much stronger when we talk about ethnic classifications, even these days.

Image reads: “Thanks to all”