He's Only 6 Years Old, but India's Chef Kicha Has Fans All Over the World 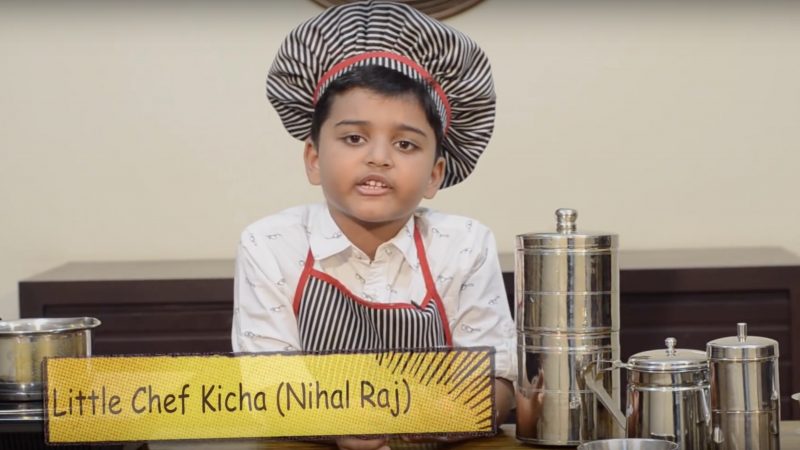 Little Chef Kicha on his YouTube show. Screenshot from video.

“Anyone can cook” was the motto of famous French Chef Gusteau in the Disney animated movie “Ratatouille“. If you look at the YouTube videos of the 6-year-old Chef Nihal Raj or Kicha (his nickname) from a suburb of the coastal Indian city of Kochi, you will understand what he meant. All you need is passion and a little bit of guidance, and you'll have a lot of fun.

Kicha is a first standard student of Choice School in Thripunithura, Kochi, in the Indian state of Kerala. Kicha started his ‘Kichatube‘ channel in January 2015, and has since become an YouTube sensation. The first recipe to be shared by him on YouTube was of ice popsicles and expanded to jam cookies, orange jelly, coconut pudding, Oreo truffles and tandoori baby potatoes, to name a few. He now has 31 videos with hundreds of thousands of views.

The focus of his channel is introducing new recipes and gadgets for kids. His mother Ruby Rajagopal encourages him, providing him with kid-friendly recipes — that means no cutting, chopping or cooking over fire. According to Kicha's father Rajagopal V. Krishnan, he started cooking when he was 4 years old after watching and helping his mother baking in the kitchen. Kicha loves to have people watching him cook, so his father started filming him on his mobile phone and shared the footage on Facebook, which got appreciation from friends and families. He later opened the YouTube channel and started uploading videos. Kicha is encouraged by all the attention he gets and likes to reply to messages on the Facebook page for the show.

In May 2016, Facebook acquired non-exclusive rights to one of his videos for 2,000 US dollars to use for its new campaign “Space for Everyone”, making him the youngest artist to sell rights to Facebook.

Here is the much discussed Mickey Mouse Mango Ice-Cream video by Little Chef Kicha picked up by Facebook:

Last month, he even went to United States to appear on the popular daytime Ellen DeGeneres talk show, the youngest Indian to do so. While there, he cooked a traditional Kerala breakfast snack called Puttu.

Kerala breakfast on Ellen in the most adorable way 😍😍! “6-Year-Old Chef Kicha Cooks with Ellen https://t.co/8VijnWsaDa via @ellentube“

Kicha the lil chef from kochi in Ellen's show making Puttu…Impressive and he's one smarty pants!!! Way to go! https://t.co/ORsYmMRrlz

The video of his appearance has almost 1.5 million views so far:

Kicha gets a lot of love from his viewers. For example, Rachel Verghese commented in Facebook:

Kicha, you were adorable on the show. For a young six year old to be on Ellen's show was awesome and you did a great job. What an accomplishment. We are all proud of you.

Kicha has over 12,000 subscribers on his YouTube channel. You can catch up on the latest about him on Twitter.