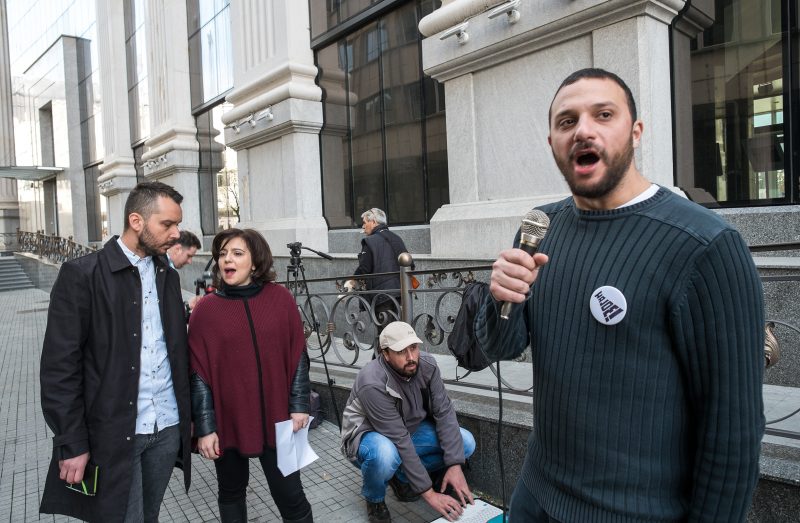 Pavle Bogoevski, one of the most visible activists participating in Macedonia's “Colorful Revolution” protests, faces trial in Criminal Court on October 5 in Skopje.

Macedonia's authorities have charged Bogoevski with “participation in a mob about to commit a criminal act” on April 18, when the building housing the Ministry of Culture was splashed with paint during a protest against the pardons of suspects for high level political corruption. Demonstrators demanded an end to efforts to obstruct the work of the Special Prosecutor's Office (SPO).

Though throwing paint is just a misdemeanor in Macedonia, the case has attracted national attention and become a major controversy. State prosecutors claim the Culture Ministry's building qualifies as an object of “protected cultural heritage,” though the government failed to post any signs to indicate this status, as mandated by law. Recently, officials have exploited similar legalistic tactics to bring criminal charges against prominent protesters, threatening activists with possible imprisonment. 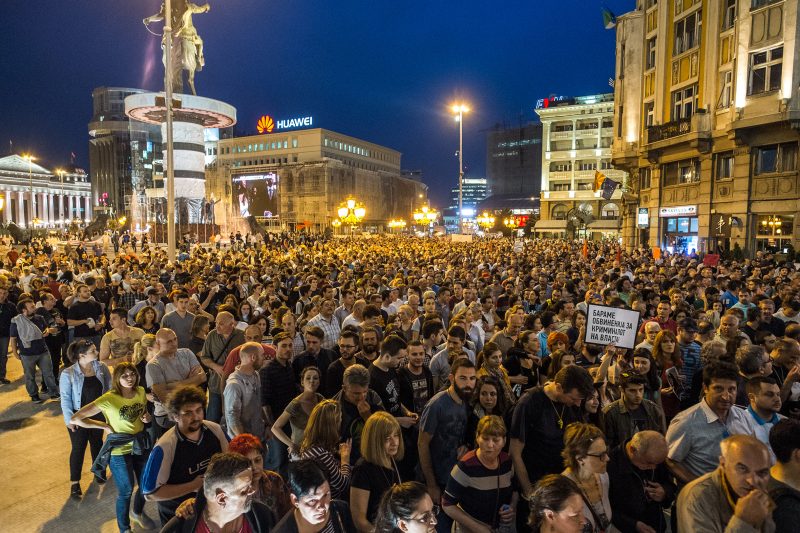 Bogoevski was subject to two “spectacular arrests” during protests that took place between April and June. On both occasions, the arrests incited further demonstrations, and the police soon released him.

The anti-corruption protests, dubbed the “Colorful Revolution.” were non-violent demonstrations that included marches, performances, and a great deal of color. Carrying paint buckets and water squirters, protesters in more than 20 cities across the country splashed paint on structures they say symbolize the “impunity and poor governance” of the ruling regime.

Thousands of people participated in the April 18 protest, which included a march through the streets of Skopje from the SPO headquarters to the parliament, painting the Triumphal Arc, and throwing soap in the Alexander the Great fountain. The group then walked to the Ministry of Culture building and the seat of the government. Police only singled out some demonstrators, however, marking them for “selective justice.”

For years, human rights reports have documented the Macedonian government's interference in the judiciary and prosecutor's office. 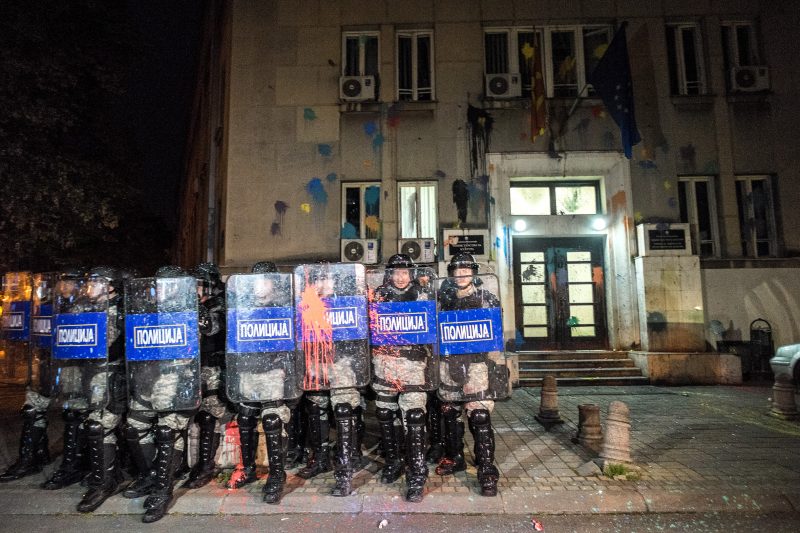 Other participants in the “Colorful Revolution” expressed moral support for Bogoevski, announcing on the movement's “official” Facebook page that they want to protest in front of the courthouse before the start of the trial. The message has been shared on Twitter, too.:

Tweet: “Let's give support to our comrade and brother in arms, Pavle Bogoevski. No Justice No Peace! I protest!”
Colorful Revolution FB post: “One for all and all for one!
On Wednesday 05.10.2016 at 10:45 hrs we will be togather with our brother in arms Pavle Bogoevski in front of the Basic Court Skopje 1. We call upon you to join us.

The pressures against the people who protested daily and continue to protest against this regime do not cease. Citizens who criticize the government are put on trials, while the criminals walk around freely, destroying evidence and traces of their old crimes, and commit new ones!

Public Prosecutors Office lead by Zvrlevski blames Pavle for participation in a crowd about to commit a criminal act. This is the first criminal charge for paining the symbols of the criminal regime in Skopje is another attempt by the prosecutors and the judiciary appointed through Gorde's notebook [former Minister of Interior and high official of ruling party VMRO-DPMNE, Gordana Jankuloska] to

You can put Pavle on trial only after [former Prime Minister and head of VMRO-DPMNE Nikola] Gruevski first undergoes a trial in an adjacent courtroom, in front of truly independent and impartial Court!

Until, if there's NO JUSTICE, there will be NO PEACE!”

In an interview with the independent news portal Slobodna Makedonija (“Free Macedonia”), Pavle Bogoevski denounced public prosecutor Marko Zvrlevski, who he says “didn't moved his little finger against the cancer-like mafia that was destroying our state.” Bogoevski says he feels no guilt for his actions, but he is ready to face justice, “when there will be justice for all.”

I don't think I am charged because of the “damage” to the Ministry of Culture. I am convinced that these trials have only one purpose: Gruevski's regime sends a message saying that they are still invincible and that their “justice” will be swift, hard, and efficient against all who don't submit. Moreover, they still use the judiciary in Republic of Macedonia to label officially those who dare to raise their voices against them as “convicted felons” and “perpetrators of criminal acts.”