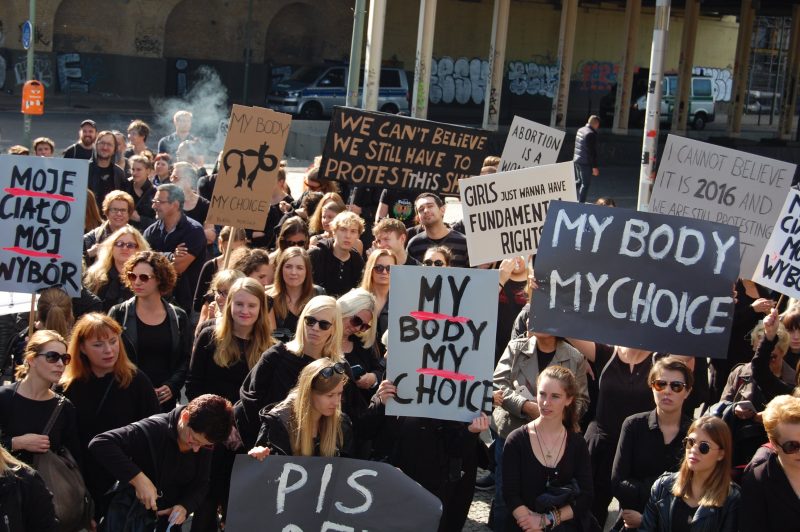 Women and men wearing black as a sign of opposition in the #BlackProtest in Berlin. Photo by Kasia Odrozek, CC BY.

Tens of thousands of people joined in “Black Monday” protests across Europe, wearing black to show their solidarity with women on strike in Poland against legislation that would criminalize almost all kinds of abortion there.

Before the event, it was estimated that millions of women were set not to go to their workplaces or do domestic work. While the total number of strikers is still unknown, the action inspired supporting protests in tens of Polish cities. Massive demonstrations of solidarity also took place in Berlin, Brussels and Kiev, and smaller scale events were seen in Zagreb and Skopje — about 60 European cities in total. The high turnout was widely commented on social media and in the international press.

Under the hashtag #BlackMonday, #BlackProtest and #CzarnyProtest (“czarny” means black), participants and observers posted pictures and videos including this video of an estimated 30,000 people in Warsaw's old town protesting in pouring rain. Thousands went on the streets of Gdansk, Wroclaw and Krakow.

The strike is a continuation of the “Black Protest” movement, a massive reaction to the government's latest plan to increase the severity of the country's anti-abortion law by including stipulations such as five-year prison terms for both women abortion patients — including rape victims — and doctors. Right-wing national-conservative party PiS (short for the “Law and Justice” party) holds a majority in the parliament and has the backing of the Catholic Church.

A solidarity protest organised by the local chapter of the feminist organisation Dziewuchy Dziewuchom took place on Warschauer Strasse (Warsaw Street) in Berlin, gathering over a thousand people. Polish women and men as well as German and international supporters of all generations came together to show their opposition to the bill and solidarity with women in Poland.

“It is important to protest in Berlin not only because there are many Polish people here but also to speak out very loud about what is happening in Poland,” said Anna Krenz, one of the organisers of the protest in Berlin. 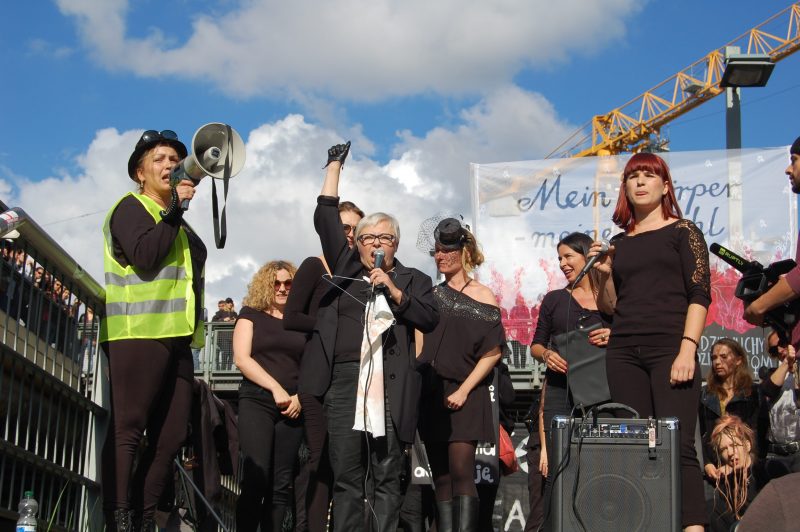 Solidarity #BlackProtest in Berlin. Photo by Kasia Odrozek, CC BY.

Karolina, a Polish protester living in Berlin, told Global Voices her moving story of miscarriage and why it was so important for her to protest on Monday:

A few months ago, the day I realized I was pregnant, I have also gotten the news that my grandmother had a stroke and is fighting for her life in a hospital in Poland. Some days later I packed my stuff and went to see her and (as it clear from today's perspective) say goodbye.

It was a long drive, a very emotional days and a hard time. On the way back home, to Berlin, still hundreds of kilometers away from Germany, I've started to have terrible pains and cramps in my lower abdomen. I also started bleeding. I immediately knew, what was going on, I've heard it from many friends, I was warned, that in the early stage of a pregnancy, miscarriages happen pretty often. I was crying, praying and suffering and of course the question came up, if I should just be driven to the next hospital.

But my intuition said “No! I will make it to Berlin and go to see doctors there”, which (after a call with my doctor) I did. I have sadly had a miscarriage, there was nothing to be done, but I had the best moral support from my doctors, I could have expected. They told me, it was not my fault, it couldn't have been the stress I have put myself into, there has most likely been a genetic problem and that I should be thankful to my body, because it protected me in the way it should. The doctors were warm, caring, understanding, supporting and just plain wonderful.

If I imagine what could have awaited me in a Polish hospital in the same situation, it makes me really grateful to be living abroad. If besides the trauma of losing a baby, I would have to have gone through the trauma of questions, accusations, moral instructions, shame, fear, denial of help or even the possibility of imprisonment, I would have been traumatized for life. I demonstrated today, because I just can't accept the new proposals of the abortion law in Poland. If they go through, the will destroy women's bodies, minds and souls. Even if it makes me speechless, I will raise my voice! 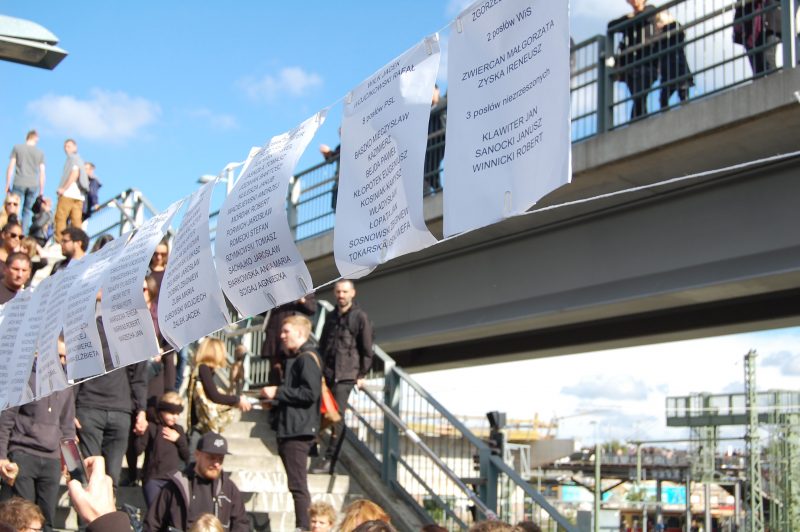 Displayed for public view: a list of parliamentarians who voted in favour of proceeding with the anti-abortion law.

Meanwhile, Polish Minister of Foreign Affairs Witold Waszczykowski dismissed the protest in a morning radio show with the words: “Let them play. If somebody thinks there are no more serious problems in Poland today, go ahead.” He further claimed that women's rights in Poland are in no way in danger.

In response to the plans of the government to tighten the anti-abortion law, feminist activists are planning to gather a million signatures and submit a petition on the European level in order to influence Polish law via the European Union, of which Poland is a member.

Looking at the increasing scope and strength of the #BlackProtest, they might have a good chance.