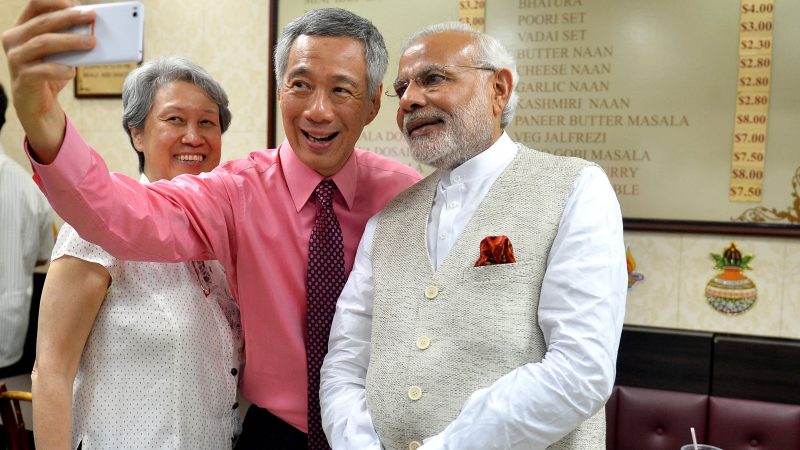 There is a growing resentment amongst ordinary people in India over “VIP culture,” or how politicians and bureaucrats seek special treatment in every aspect of life because of their position. Their actions sometimes make headlines, such as a VIP motorcade with a lot of police protection that held up traffic and people, including an ambulance carrying patients, for hours earlier this year. On average, there are three policemen protecting one VIP, whereas, only one policeman is available for more than 700 ordinary citizens.

That might be why Singaporean Prime Minister Lee Hsien Loong, who arrived in Delhi on Monday, October 3 for a five-day visit, seemed to be a breath of fresh air for many Indians. He broke the tradition of taking the official entourage of official cars and opted for a chartered bus for himself, his wife Ho Ching and a delegation comprising key ministers, members of parliament and senior officials to reach their hotel.

This unconventional method to travel by an international delegation was hailed in India by the social media users.

No fancy limo, Singapore PM boards a bus from the airport to the hotel. #FTW https://t.co/X0cMpkAOj6

A lot to learn from Singapore https://t.co/WlBs5gsmqA

On India Visit, Singapore PM Ditches VIP Convoy For Bus Ride:https://t.co/JsjM3MzQYr: our politicians don't have courage to be so simple

“We should learn from him and do away with this VIP culture in India ” https://t.co/d9Tr40czfn

These comments show the frustrations amongst ordinary people who would like to see an end to VIP culture in India. A video posted on YouTube by user Rajeev Ram shows that the motorcade of one Indian deputy chief minister consists of more than 20 vehicles:

Akshaya Mishra at news site Firstpost said that the VIP culture is demeaning:

In India, just about everybody, who’s anybody is protected. The list is impressive indeed: politicians, ministers, bureaucrats, judges, spiritual leaders, criminals and even the kin of the leaders.

The whole VIP culture is nothing but another aspect of corruption in India, when you see a VIP being treated like a king, there is a person behind the scene who has been bribed. The VIPs and the people who serve them initiate a vicious circle of corruption and the general public often has to haggle to get their way through a normal government office.

R Jagannathan at Firstpost thought that the issue is just not about VIPs; it's embedded in everyday people and is a consequence of bad parenting:

VIP cultures do not develop in a vacuum. They come from the attitudes we inculcate in our children and young adults at home and school.

There is an increasing awareness among people in India about the misuse of privileges by the VIPs at the expense of the people. Many think that like many Western countries, VIPs should be treated like the general public, should not be allowed to block traffic or be given extra privileges.