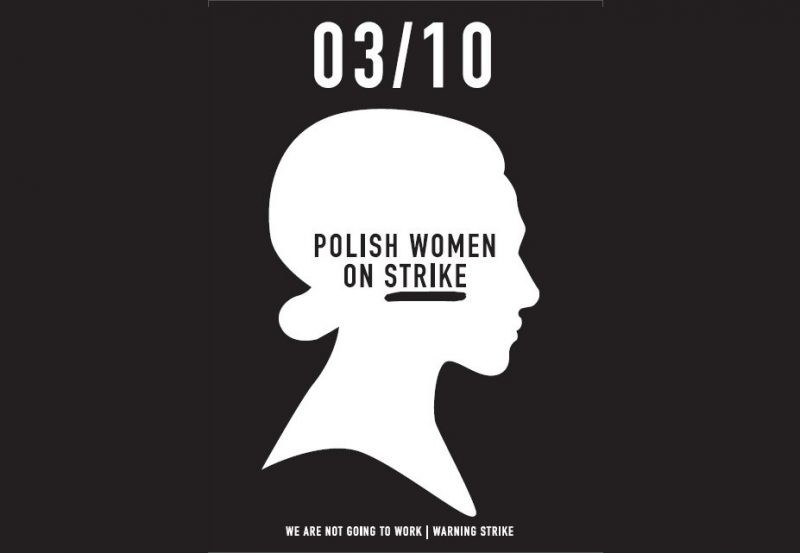 Poland is readying for a massive general strike on October 3, as part of the next stage of a protest movement against legislation strengthening the national ban on abortion. Activists in Germany are also preparing solidarity actions.

Polish women's rights activists announced a nationwide strike of female workers intended to bring Polish society and the economy to a standstill on October 3.

The strike is a continuation of the “Black Protest”, a massive reaction to the government's latest plan to increase the severity of the anti-abortion law by including stipulations such as five-year prison terms for both women abortion patients — including rape victims — and doctors.

The first phase of the protests involved digital activism, with people expressing their disagreement with the proposed law by posting photos of themselves dressed in black, using the hashtags #czarnyprotest (“#BlackProtest,” found here on Facebook and Twitter) and #blackprotest (Facebook, Twitter).

After the Polish Parliament proceeded with consideration of the controversial legislative proposal on September 23, activists responded with massive demonstrations in tens of Polish cities as well as in several other cities around the world the following weekend.

Right-wing national-conservative party PiS (“Law and Justice”) holds a majority in the parliament and has the backing of the Catholic Church. Its lawmakers also voted to dismiss another piece of legislation that would have liberalized existing laws. Proposed by the “Save Women” pro-choice coalition, and supported by a petition with 150,000 signatures, it would have allowed for legal abortions up until the 12th week of pregnancy.

On October 1, political party RAZEM (“Together”), a very active element of the protest movement, which also includes civil society organizations and individual activists, organized another pro-choice protest in front of the Sejm, the Polish Parliament in Warsaw.

The protest movement has received support from left-wing political parties and human rights activists across Europe.

A survey by polling company Ipsos indicated that 11% of citizens support stricter anti-abortion laws, 47% do not approve changes to the existing law and 37% demand liberalization. Another poll showed wide support for the protest movement.

One major “Black Monday” Solidarity Demonstration with Polish Women's Strike is scheduled to take place at S+U Warschauer Strasse Station (Warsaw Street) in Berlin. The organizers, the independent collective Dziewuchy Dziewuchom Berlin, include ethnic Polish women who want to support those that face further infringements on their human rights.

Black Monday is a warning strike by all women in Poland. During the daylong strike, they will take a day off at work, universities and schools, they will leave their housework at home. The strike is a collective initiative, gathering women of different ages, occupations and life experiences.

The Black Monday protest is a national-scale event, motivating thousands of women in a very short time, in response to a critical situation in Poland. Recently, famous Polish actress Krystyna Janda posted on social media the idea of organizing a national strike based on the one in Iceland, which took place in 1975. There, women fought against gender inequality and their strike paralyzed the whole country for a day.

In the current circumstances, in 2016 (in the 21st Century!), Polish women need to fight for their basic human rights of self-determination, and more specifically, for their reproductive rights.

One digital tool deployed to mobilize people around the upcoming ‘Black Protest’ activities is this punk video created by the group EL Banda. As of this writing it has amassed over 6,000 views on YouTube since it was posted September 27.