Jamaicans Get Fired Up About the U.S. Presidential Contest and a Popular Singer's Shock Endorsement 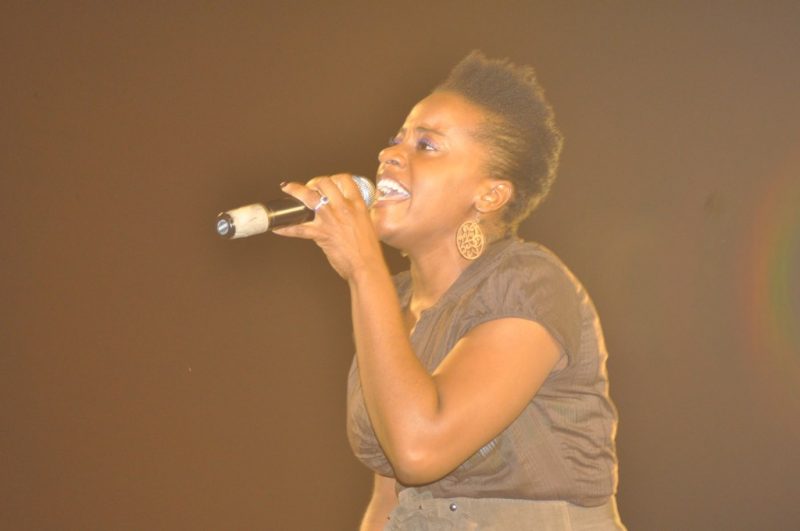 Jamaicans have a passion for political rough and tumble and with a large diaspora population in the United States, politics-watchers are currently fixing their gazes on the bitterly contested 2016 U.S. presidential race featuring Hilary Clinton and Donald Trump.

On September 26, for instance, an enthusiastic (and very vocal) group of around 100 young Jamaicans watched the first presidential debate between Trump and Clinton at a special viewing and discussion event in Kingston. It was standing room only, with some latecomers squeezing into a corner on the packed floor. 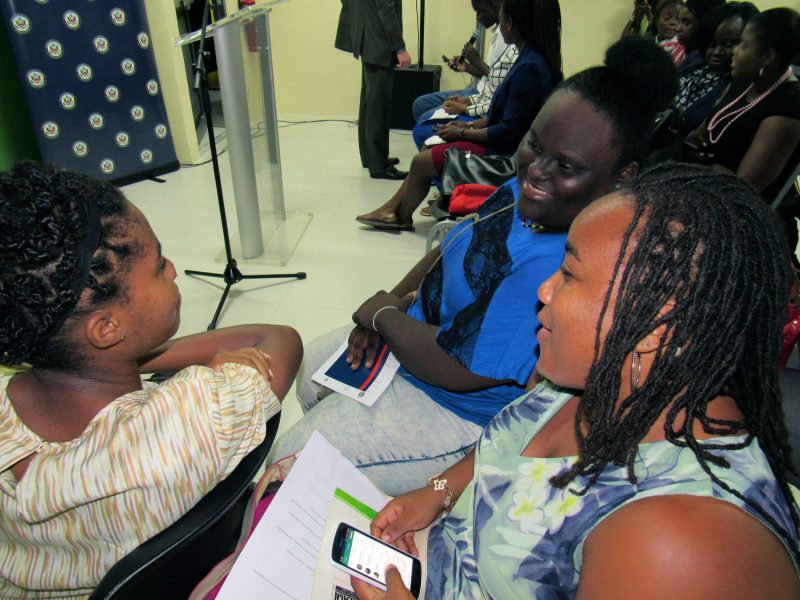 Attendees at the Kingston viewing and discussion of the first U.S. presidential debate. Some 90% of the audience was young people. Photo by the author, used with permission.

Jamaicans are, of course, already plugged into the culture and politics of their neighbors to the north via cable, Internet and mass media, so interest in the vote would be fairly high at any rate.

But a local controversy wherein local reggae singer Etana startled fans by asserting her admiration for controversy-laden Republican candidate Donald Trump has boosted interest in the contest even further.

Etana made clear her support for Trump in a September 23 interview on the popular Television Jamaica culture show ER (Entertainment Report) crediting Trump for being “straight-talking” and defending his stance on Mexican immigration that has sparked fury both inside and outside the Latino community in the U.S.

The reaction from young Jamaicans was swift and scathing.

#Etana sey “my music has nothing to do with what I believe in”. Well thanks for the clarification. I now know never to listen again!

Truly disappointed and disgusted at any form of racial profiling being endorsed by #Etana https://t.co/niq69Iudbg

With the exception of #Etana, most #Jamaicans are in support of #Clinton #debates

The singer, hailing from the fairly humble August Town area, has established a rootsy, down to earth and politicized image in recent years, calling herself “The Strong One”.

#Etana is very frank and straightforward with social ills in Jamaica. She is one of the few who will say it as is – Anthony Miller,#RJRBTH

In the interview, Etana also compared unfavourably the Jamaican socio-economic situation — especially the health service and security concerns — with that of the United States.

Her local fans expressed shock and betrayal, assuming from her tone that she must now be living overseas.

While the perceived contrast between Etana's socially aware lyrics and her televised comments upset fans, it did not perturb the singer herself.

“This is just a personal thought,” she said, regarding her Trump endorsement. She betrayed some ignorance of the facts surrounding her preferred candidate, however, appearing confused about his wife Melania Trump's nationality and ethnicity.

I am Jamaican, whenever there are issues in Jamaica, America, Canada or the UK we all cuss or have colourful conversations about our issues. I simply stated my views on the change I'd like to see. I would never bash or turn my back on the country I love and the people who sang Wrong Address and other songs I have written so passionately. My statements did not come off right and I won't blame Anthony Miller for that. I take full responsibility for all that went wrong.

Please do not forget all the good I have done. I am not offended by any passionate remark, I know you are angry. I love you all unconditionally and nothing will change that.

Later, on the eve of the first presidential debate, she appeared to waver in her support for Trump, noting:

I am heavily invested in the outcome of this election and given the backlash on social media because I said I support Trump, I have decided to do some more research, watch the debates and weigh all that before I come to a decision. I am entitled to my own opinion and I have the right to change my mind as I see fit, I will be tuning in to watch 90 unpredictable minutes of this first debate on Monday night.

Etana is not the only Jamaican entertainer to comment on social and political issues: Kabaka Pyramid, Protoje and Chronixx also address social justice issues in their music, which is a hybrid of roots reggae and dancehall, sometimes called the “Reggae Revival”.

Everyone is entitled to their own opinion. We live in a democratic system. If Etana had said she was voting for Clinton, nobody would be attacking her that way, so it means that only their opinion counts. Only the opinion of Internet bullies count now.

UK-based Jamaican writer Kei Miller used some of Etana's own songs to illustrate his plea for forgiveness for his favorite singer:

So a week has gone, and maybe — just maybe — tempers have calmed. There are more important things to worry about than Etana’s lapse into silliness, not least of all a coming hurricane. And after all that brouhaha, all the rage, all the brugalungdung — it is time now to forgive the woman. For all the good she has done and sung, we owe her that…

In my mind, Etana’s committed one big sin in her interview, and that was to turn her back on a message she had once preached so powerfully. She had become — perhaps unwittingly — a hypocrite.

Etana’s support of Donald Trump is many things — confusing, mind-boggling, frightening — but it is not a sin that requires any repentance from her or any forgiveness from us. Most of us have no real say in the upcoming American elections but at some level we have to respect the democratic process. Many people — indeed many black people — seem to support this orange-haired buffoon, and hard as it is, we have to be able to hear what it is they stand for and what is in his message that they support rather than shouting them down and shaming them into silence. I have so many friends who are people of colour, and Republican, and I imagine this must be an especially difficult time for them to be who they are and to say what they feel.

And indeed it was shocking — that Etana who for many of us epitomizes more than just feminism but a sort of ‘womanism’ and also black pride, should throw her support behind a man who epitomizes misogyny and racism. Her flippant comment that she likes that Donald Trump simply says it like it is was, at best, uninformed. We know that Donald Trump says things as he sees them, not necessarily as they are. Still — much of this is confusing and scary, but none of it is a sin.

Meanwhile, tech entrepreneur Ingrid Riley took a sly dig at “The Strong One”:

I am ordering tranquilizer darts for any Jamaican at home or overseas, who is a Trump suporter. That goes for any Uncle Tom African Americans as well. You shoulda shame! #debatenight

The whole “Etana drama” points to an interesting question in Jamaican society and culture: Should those in the entertainment world, who have a huge influence on our youth, feel obliged to practice what they preach? There is no doubt Etana's support for Trump has lost her some Jamaican fans.

Finally, another Twitter user had some advice for the singer:

#Etana needs to give Social media and Press Releases on anything not musically related a break. We r a 9 days news country. #itwillpass

The viewing and discussion of the first 2016 US Presidential Debate was organized by the U.S. Embassy in Jamaica, in partnership with the 51% Coalition — a grouping of women's organizations with a focus on women's leadership. Regional NGO Panos Caribbean, a member of the grouping, is the implementing partner for the first in a series of forums that will focus on the U.S. elections, culminating in an election night broadcast event. Disclaimer: The author of this post is member of the coalition.