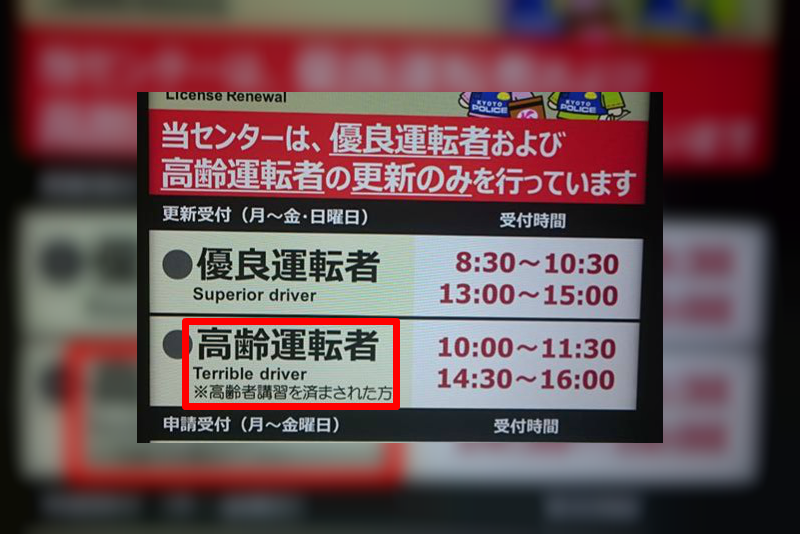 The botched translation displayed at a driver's license renewal center in Kyoto. From image widely shared on social media. Modified from original photo by Joshua Levine.

The mistranslation was displayed on electronic noticeboards both at the entrance to and inside the center from September 1-20. 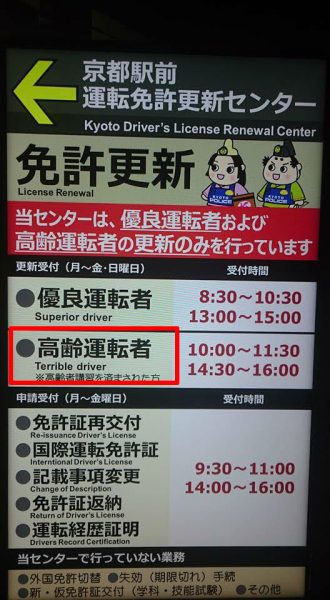 The mistake was pointed out by translator Julian Holmes, a resident of Kyoto, who contacted the local newspaper.

“Why has the English translation ended up like this? It's just proof that nobody checked it. This is offensive to elderly people and unacceptable coming from an international city like Kyoto,” said Mr. Holmes.

The incorrect English was initially removed, and the phrase “terrible drivers” later replaced with the more appropriate, if not quite grammatically accurate “elder drivers”.

The Kyoto Prefectural Police apologised for the error, explaining that the mistake was present in the translation when it was received from the contractor, and that the translation was not checked for accuracy before being put on display.

“We are sincerely sorry to have caused offence to the elderly due to our insufficient verification (of the translation)”, said the police.

However, online news service J-Cast News provided a bit of context about just how “terrible” the phenomenon of older drivers might be in Japan, noting:

While the term “awful” was decried as an inappropriate way to describe elderly drivers, according to police, nationally the rate of senior citizens involved in accidents is cause for alarm. For example, in Kyoto Prefecture senior citizens were determined to be at fault in 1,941 of 19,460 accidents that occurred in 2005—a rate of about 10%. A decade later, in 2014, seniors were at fault in 1,803 of 11,850 accidents. So the rate increased to 17.7%. While the total number of accidents has declined, the rate of seniors determined to be at fault in these accidents has increased.

The unnamed reporter also dredged up a variety of comments on the Yahoo version of the article that demonstrates the bias against older drivers potentially held by some Japanese people:

The Yahoo article that reports on the mistranslation features comments like these:

- “Isn't it (“terrible drivers”) just the reality?”
– “The mistranslation is not totally incorrect, right?”
– “I don't think this is totally a mistranslation.”

Why “Engrish” continues to prevail across Asia

Mistranslations are all too common in Japan, and throughout Asia. The website Engrish.com is a gold mine of these bizarre misuses of the English language. 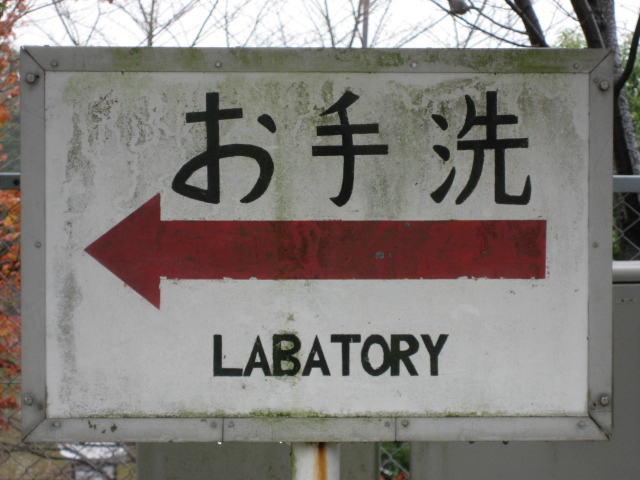 The reasons for this prevalence of mistranslations are manifold. Translation requires two major skills: the passive language ability required to understand the source text, and the active language ability required to render it into the target language. As the second skill requires an active command of the target language — something generally possessed by native speakers — it is generally accepted that translators should be native speakers of the target language, not of the source language. Thus, a French speaker would undertake an English to French translation, but not a French to English translation. 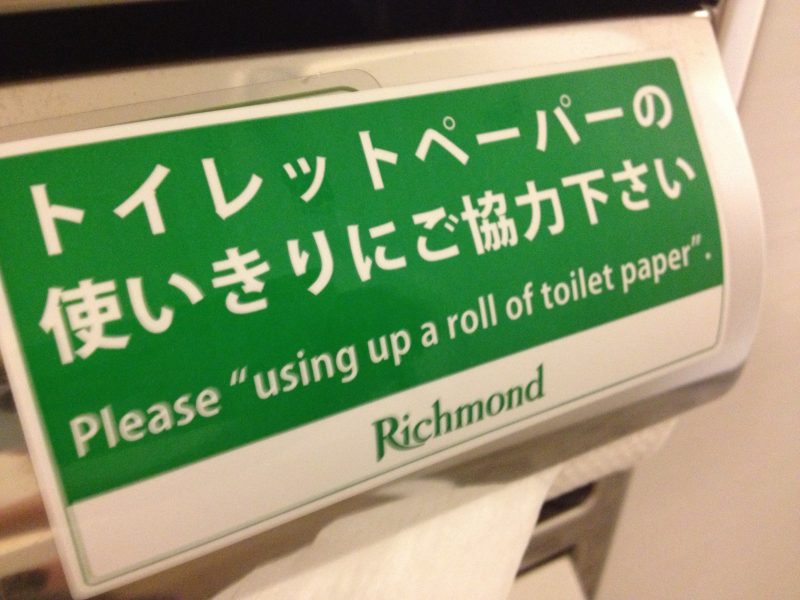 Whether due to a lack of understanding about translation, cost restrictions, or the relatively small number of native English speakers who learn Japanese, many Japanese companies do not employ native English speakers for translations into English. Some companies with no foreign staff translate in house, assigning the task to the Japanese staff member perceived as having the highest level of English ability—no matter how limited this may be. 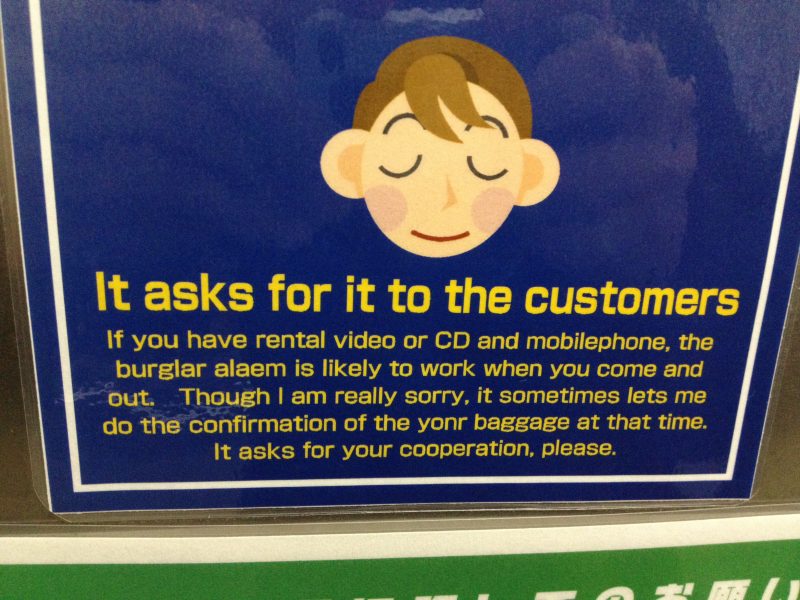 Machine translation is also commonly used, to often amusing results. The convoluted and cryptic phrases produced by machine translation prove that this technology is a long way off replacing human translators, particularly across some languages.

Some of the strangest English in Japan, including the puzzling phrases that often adorn T-shirts and bags, is used for purely stylistic purposes, and is not intended to be read or understood. 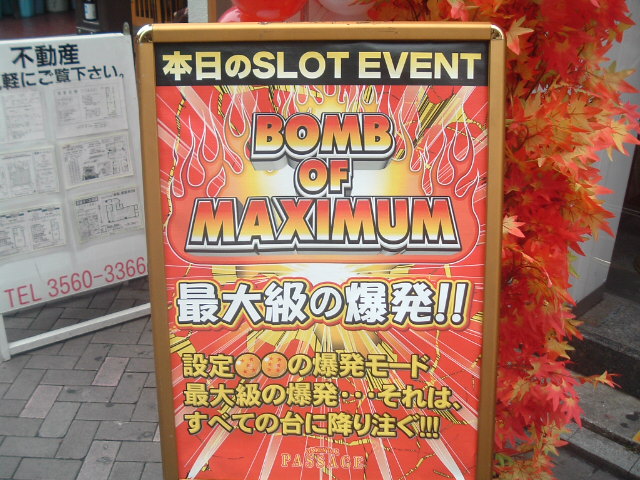 While acceptable, or at least harmless, when used for decoration, mistranslations are not something that should be expected from major corporations and the government, which should have the resources needed to maintain higher standards. Hopefully Kyoto City will get its translations from a more reputable source in the future.