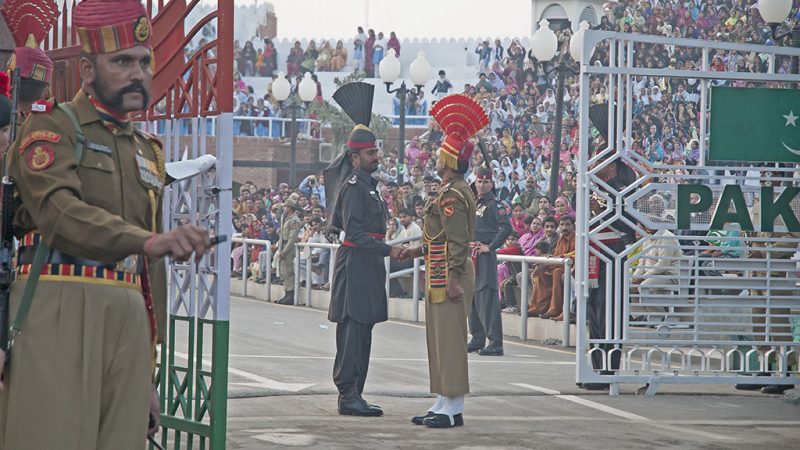 ‘Beating of Retreat’ Ceremony at International Border at Wagha. Image from Flickr by user Koshy Koshy. CC BY 2.0

That India and Pakistan share a tumultuous political and military relationship is no hidden fact globally. But after the September 18 Uri attack by four heavily armed militants that killed 18 soldiers in the Indian-administered state of Jammu and Kashmir, hostilities between the South Asian neighbours have grown tense, with a diplomatic stand-off and border incursions.

The assault has been called ‘the deadliest attack on security forces in Kashmir‘ in two decades. India has retaliated with a ‘surgical strike‘ across the Line of Control — the line that separates India- and Pakistan-controlled parts of Kashmir and Jammu — on September 29.

One of the major casualties of this divisive battle between India and Pakistan is the art industry, precisely the film industry — Bollywood. Indians on social media have taken potshots at Pakistani superstars working in Bollywood like Fawad Khan, Mahira Khan, Mowra Hocane and Rahat Fateh Ali Khan, while India's right-wing political outfit Maharashtra Navnirman Sena (MNS) threatened the actors to leave India or face dire consequences.

To add to it, Pakistani distributors have boycotted Bollywood film ‘MS Dhoni: An untold story’, which is based on Indian cricketer Mahendra Singh Dhoni‘s life.

MNS members demonstrated in front of Bollywood producer Karan Johar's office and asked him to edit scenes involving Fawad Khan from his upcoming venture ‘Ae Dil Hain Mushkil’ (The heart is difficult) or face protests. Even the upcoming film ‘Raees’, which stars Indian actor and Bollywood superstar Shah Rukh Khan and also features Pakistani actor Mahira Khan as the female lead, is being targeted by the political outfit.

It's also high time V realise that artistes r not above d nation and those artists who don't identify with our pain shld nt b entertained.

It is also high time we realise that artistes are not above the nation and those artists who do not identify with our pain should not be entertained.

Pakistan will be least bothered if a few artists do not get work in India. If you have the guts, stop import-export.

unfortunate stance of Mia Sharif at UN. Zee is considering stopping Zindgi programs from Pak,as well artists from there should leave

Will not shut down Zindgi channel but revamp programming without Serials from Pakistan, we will have Indian subjects on Muslim community

Fawad Khan becomes a symbol of the India-Pakistan divide

I don’t know about others, I used to be very vocal about the fact that culture knows no boundaries and that there should be free exchange of artistes between India and Pakistan. Me and few of my friends supported and patronised the fact that India and Pakistan should collaborate for projects, specially when it comes to cinema. We recognise that cinema is one of the strongest forms of dialogue that can go a long way in forming public opinion across borders which will facilitate the peace process between the neighbours.

Dear Fawad, whatever we have mentioned earlier is being done by us. India. Your country is doing just the opposite. We talk about dialogues but this is just becoming a monologue of peace from India.

We give you so much love and money, but your country continues to ban our cinema and our artistes.

Banerjee's letter received many responses, including this one from Pakistani doctor Asif Nawaz at the Tribune Blog, who argued it was actually India that was sidelining Pakistani films:

India didn’t make Fawad Khan a superstar, it roped him in because he was one already, and marketed the product where the demand was brewing already. Mahira Khan is another sweetheart of Pakistan. These are the highest paid celebrities in Pakistan, and the latter’s film in India hasn’t even released yet. The last point was just for your notice in case you try to claim Mahira Khan’s stardom in the future too.

It’s grossly ignorant on your part to claim that while your country opens its doors ever so warmly to our country, we shut them in your face just as relentlessly. Can you please tell me how many Pakistani films have graced the screens of your country lately? While we have seen almost every Indian film playing in our country, if one of our films is lucky enough to be given the green signal by your country, it lands in trouble.

The fact is Pakistan is the third highest overseas market for Bollywood, and cross-border talent exchange between the two countries has been fostering positive cultural exchange for decades.

And Namita Handa from India defended Fawad Khan on Quint:

Fawad, you don’t lack courage. You don’t lack conviction. You definitely don’t lack guts, you are one actor, who at an early stage of his career took up a challenging role in Kapoor and Sons and has been applauded for it. You see what you’ve earned here is only because of your hard work and capabilities. We’ve showered love on you because you deserve it (and also because of your dreamy eyes) not because you are from Pakistan.

‘War is never the solution. We all want peace.’

Rajyasree Sen wrote on Scoopwhoop news site that the arts should be above the problems between India and Pakistan:

According to me, culture and art and sport should be without boundaries and borders. These are the two areas which bring people together and encourage understanding of other cultures. It is why the Refugee contingent at the Rio Olympics, were such an inspiring sight. Because they became the face of the fact that war-torn countries are made up of humans, some extremely talented, who are the collateral damage of their governments and international relations and wars.

While on Facebook, Samyak Chakrabarty from Mumbai argued that banning actors from Pakistan might send an effective message:

Banning actors from Pakistan is not a solution to anything. But it will send a strong message across the border that India and it's various institutions will no longer operate under any pretence of peace and dialogue. It is time to unleash the necessary evil. We must support the Indian government and army unconditionally in these testing times. Those in the media arguing about humanity and universal brotherhood must first spend a few nights at the [Line of Control] before offering utopian tips of how to solve the Indo Pak situation.

“Ask those about wars who have attended funerals of loved ones”.
War is never the solution. We all want #peace. #IndiaPakistan

And Bollywood news website Spotboye weighed in on the argument with a video satirising the hate against Fawad Khan:

I choose to blame you. Yeah, because you're perfect. I have no other option. I mean, I can't go against the motion of hate. It's trending on social media, and this is my chance to show that I'm a nationalist, I love my country, I'm a patriot. […] Because if I can manage to stop you from entertaining me and working in my films, my country will be safe and peaceful.

A Change.org petition is asking people to demand that India and Pakistan resolve their issues peacefully rather than contributing to the calls for war.

Unfortunately, unless sanity prevails across both sides of the border and people realise that art is beyond jingoistic nationalism, it seems that artists and art will suffer.