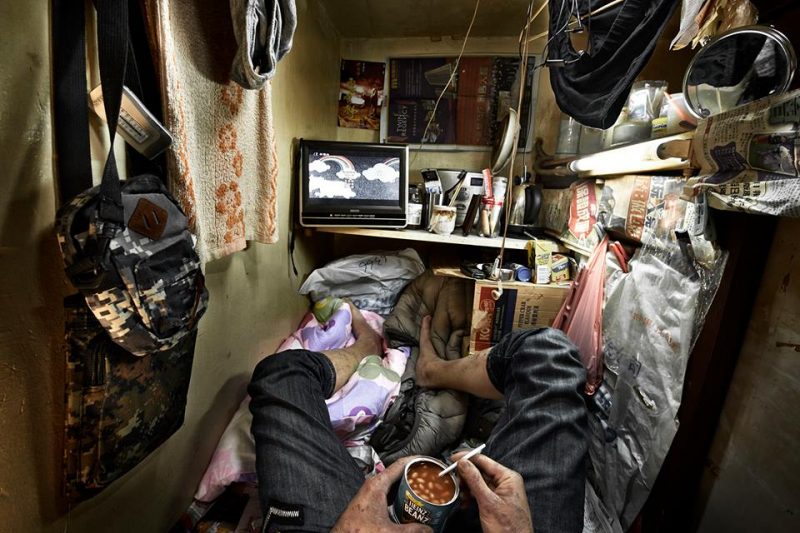 How the urban poor are “trapped” in subdivided units. Photo by Benny Lam. Non-commercial use.

Many of you have probably heard that Hong Kong's housing market is the most expensive in the world. How exactly do such high property prices affect real people's lives?

Well, much of Hong Kong's urban working class are stuck living in poor quality subdivided units, which are popularly described to be “mosquito-sized.” Now, to make matters worse, the wealthy are buying up luxury mosquito-sized apartments for investment purposes, thanks to the Hong Kong government's market-oriented housing policy. This, of course, doesn't bode well for the poor.

Just take a look at the price tag of the recently launched apartment development One Prestige in North Point, a commercial and residential district in Hong Kong Island. The building has a total of 128 flats, and 126 of those are open studios with sizes from 163 to 207 square feet. The size of the smallest unit is more or less equivalent to a parking space for a school van. The bed is right next to the open kitchen table according to the unit’s floor plan below.

The floor plan of the smallest unit in One Prestige. Adapted from Apple Daily's photo.

In 2016, three similar mosquito-sized apartment projects have been launched thus far. With each development, the sizes have been shrinking, but the prices have been ballooning. The developers justify their projects by arguing that the market demand for small apartments is high in urban areas and the development of mosquito-sized units can effectively increase the supply. These projects are also in alignment with the government's land policy which encourages developers to build high-rises on tiny strips of land in already dense urban residential areas in order to meet its target of 480,000 new homes in 10 years. Some land plots are less than 500 square meters; Hong Kong people have nicknamed them “needle-type” apartment buildings.

It has been estimated that the city will see 5,000 tiny apartments introduced to the market annually until 2019. However, the projects are not catering to the needs of local residents, but to investors’ interests. Approximately 70 per cent of the buyers of the luxury small units are investors.

In order to make a stable return of their investment, the monthly rent per square foot in One Prestige will be up to 80 HK dollars, which means the monthly rent for the smallest unit will be 13,040 HK dollars, or 1,678 US dollars. It seems inevitable that such expensive rent will worsen the already crazy urban apartment rental market.

‘Not only a problem related to poverty, but also a significant social problem’

Hong Kong indeed has a strong demand for small units in urban areas, but the demand comes from poor households rather than the young middle class.

The living conditions of the subdivided unit are usually very poor. Benny Lam, a photographer who spent two years taking photos of the urban poor living in tiny flats, reflected on his project on Facebook:

Over the last two years, I have taken photos of the poor living conditions in Hong Kong. Every photography experience in the old districts is literally suffocating, as I experience the way that a single apartment is divided into numerous tiny units: there are no windows for ventilation; and the beds there are too short for the residents to lay their bodies down flat.
There are tens of thousands of low-income families packed in such suffocating spaces in Hong Kong. You may wonder why we should care, as these people are not part of our lives. However, I would like to tell you that they are exactly the people who come into your life every single day: they are serving you as the waiters in the restaurants where you eat, they are the security guards in the shopping malls you wander around, or the cleaners and the delivery men on the streets you pass through. The only difference between us and them is that their homes are sub-divided rooms, or even just boxes measuring 6 x 2.5 feet. After their tedious and tiring work, they have only earned enough to live in a space that small. I believe that this is not only a problem related to poverty, but also a significant social problem.

The reason why many working-class people choose to live in such a cramped living environment is because they are in the service sector and have to work long hours for a modest salary. Living downtown can save them about two hours of travelling time and save them 30-40 HK dollars (5 US dollars) in transportation costs daily. So the increase in the supply of luxury urban mosquito-sized units will not help them.

On the contrary, the demand for investment opportunities has resulted in a surge in the rent for small units and will probably also result in higher rents for subdivided units in urban areas too. In fact, between 2013 and 2015, the average rent for a subdivided unit in Hong Kong saw a 10 percent rise, and the trend is unlikely to cease unless the government increases the supply of affordable urban public housing.