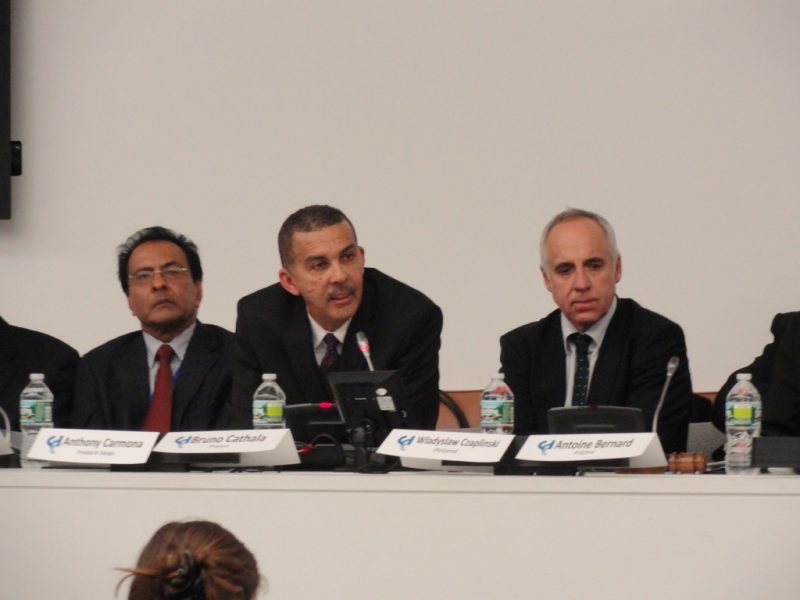 Anthony Thomas Aquinas Carmona (centre), candidate from Trinidad and Tobago, speaks at the ICC Judicial Candidates Forum in New York on October 25, 2011. President Carmona became Trinidad and Tobago's president in March 2013. Photo by Coalition for the ICC, used under a CC BY-NC-ND 2.0 license.

A Facebook Live video has sparked a controversy involving Trinidad and Tobago’s president, Anthony Carmona, and allegations of financial mismanagement by his office.

On September 20, 2016, researcher and university lecturer Rhoda Bharath hosted a Facebook Live video session in which she enquired about alleged irregularities in the management of the president’s house and office. Bharath is well-known in Trinidad and Tobago for her political commentary on her blog, on Facebook, and on local broadcast media.

Bharath’s information and line of questioning was quickly picked up by local mainstream media, which posed questions about matters such as the procurement procedure for wine purchased by the President’s house, and President’s Carmona’s decision to meet privately with National Security Minister Edmund Dillon without “reference” to the country’s prime minister, Dr Keith Rowley.

Under Trinidad and Tobago’s constitution, the president is ceremonial head of state, elected by parliament; while the prime minister is head of government, elected by the country’s citizens.

“…85 instances of incorrect classification of expenditure totalling $2,685,236.90 in contravention of Financial Regulation 65 which stipulates that a vote may not be applied to a purpose for which it was not intended.”

On September 24, during his annual Republic Day speech, President Carmona appeared to respond to these claims with a general swipe at the media, stating that:

“There are some journalists…who denigrate without evidential basis, engaged in armchair journalism who hear something by the way and it becomes reliable news….Theirs has become the language of obscenity and racial slurs—yes, that small circle that is leading the national dialogue, you are not the voice of the people because you have unfettered and unfair access to the press and media, because you have created vlogs and videos that rely for viewership and followers, not on proper and responsible research and wisdom but on distortions and sensationalism.”

In another Facebook Live video posted on September 27, Bharath said that the office of the president had called her employers at The University of the West Indies and threatened her job.

The Media Association of Trinidad and Tobago (MATT) took President Carmona to task for his comments, stating in a September 25 media release that it was “wrong to use his Republic Day message to deflect legitimate questions raised in the media about the use of public funds by President’s House.”

Bharath posted another video on the evening of September 28 in response to President Carmona’s address to the nation a few hours before, expressing dissatisfaction with his explanations for the financial irregularities and for his acceptance of a TT$28,000 (just over US$ 4,000) monthly housing allowance while living in state-funding housing. She also noted that the president never adequately addressed matters such as alleged nepotism, and the possible misappropriation of public funds.

Bharath's Facebook Live videos have attracted a wide and vocal audience, and she has pledged to continue doing them in order to seed information and help the country's media and citizens hold public officials to account.