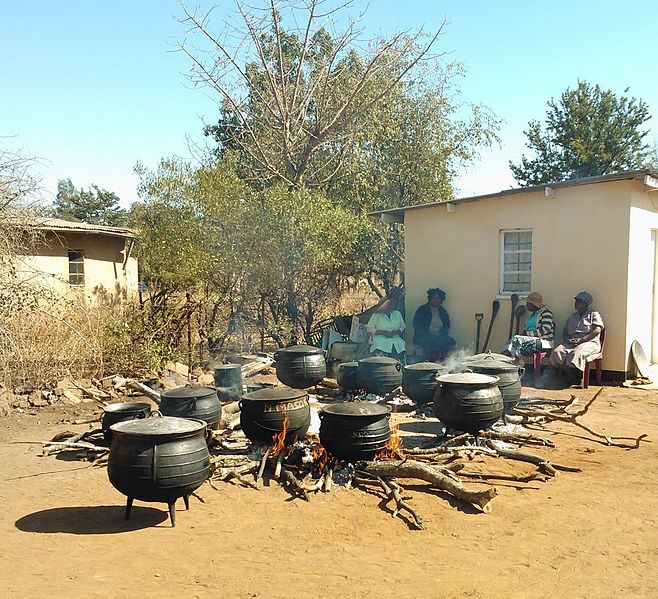 Three-legged pots commonly used in Botswana. If a young woman eats out of a pot, she supposedly will not get married. Creative Commons image by Rach151.

For example, @IGtiz, [3] a Kenyan student, has started the #100AfricanMyths [4] hashtag to share myths that are passed on from generation to generation in African countries, mostly orally.

Myths in Africa serve different socio-cultural needs. Parents, for instance, use myths to keep their young ones in check.

Here is a sample of some of the more hilarious African myths.

@PatohShanqueels explained a common myth that went around schools where caning took place:

Do not cut your nails at night, according to @xolelwandengane in South Africa:

U can't cut ur nails at night, coz the witches will come and pick them #100AfricanMyths [4]

Flo Letoaba, a South African radio talk host, added this one to the mix:

If you eat out of a pot while cooking, you won't get married #100AfricanMyths [4]

Whistling at night can be very dangerous — supposedly:

#100AfricanMyths [4] If you whistle at night, a snake will visit your room

Children were taught not to laugh at the disabled, according to @NaughtyMilz in Uganda:

If you laugh at a lame person you would give birth to a lame child…. #100Africanmyths [10]

An owl is a messenger of death, says @iGitz_:

If an owl screechs near your house, someone is gonna die. #100AfricanMyths [4]

Do not sweep away luck from your house, Vinnie from Kenya warned:

Never sweep dirt from your house at night, that is like throwing away luck from your home #100AfricanMyths [4]

Myths were also used to getting children to concentrate in class:

Although the myths were from various parts of Africa, Dickens Jnr, an African American in the US state of Michigan, said that he had heard all them:

Relating to most of the #100AfricanMyths [4] tweets is just 😂. I swear I have heard almost each one Of them.