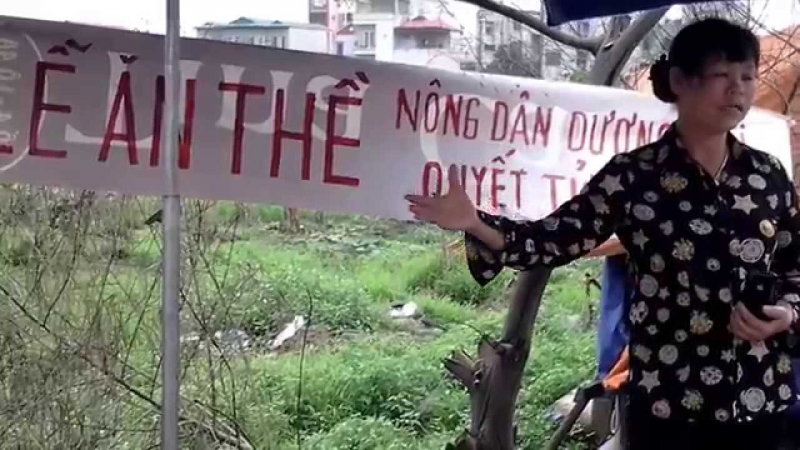 Can Thi Theu has been detained twice for organizing citizen petitions against land evictions.

This edited article by Giang Nguyễn is from Loa, an independent news website and podcast that broadcasts stories about Vietnam, and is republished by Global Voices as part of a content-sharing agreement.

It tells the story of land rights activist Can Thi Theu, who was arrested last June for ‘causing public disorder’ during a demonstration. On September 20, she was sentenced to 20 months in prison.

Cấn Thị Thêu, 53, became a resident of Dương Nội, a village just outside of Hanoi, after marrying a local farmer. In late 2007 the family lost their land to the government, and she became a land rights activist. She told Loa this:

Dương Nội is where I lived. I want my children to have a home. When I lived in Dương Nội, I was a successful farmer. I owned 40 to 50 buffalos, fruit and vegetable gardens, fish ponds. We did well. But when they came to ‘take it back”, they destroyed everything, the sheds, the ponds. We lost our livelihood. Now, life is very difficult.

Thêu uses the word “take back” because in Vietnam, the land does not belong to the farmer, or technically anyone. The economy of the Socialist Republic of Vietnam is largely agriculture-based and land is considered the “people’s property”. Individuals have usage rights, but they never own the land. That means a city dweller must give up part of his front yard to become a street if the government demands it. A peasant family can have its fields confiscated, even after they have farmed it for generations.

The government is the administrator of its usage. With Vietnam propelling towards rapid economic development in the past three decades, and rice fields making way for new developments, the tenuous system is beginning to crack.

They paid us only 200,000 đồng ($9 US) per square meter, but on the market, they sell it at a starting price of 31 million đồng per square meter. That’s almost 200 times what they paid us. With this unfair price, and with people unable to find new jobs, so many people are driven into poverty and unemployment. That’s why we oppose the repossession of our land. These prices are robbing us blind.

Cấn Thị Thêu, her husband and two sons are just one of more than 350 families in Dương Nội alone who have been taking their case to local authorities to petition for redress.

“There are probably thousands and thousands of them,” says Dũng Mai, an artist from Hà Nội. He has been running a group called Cứu Lấy Dân Oan (Assistance for Land Petitioners) since 2012.

Mai and the volunteers of the Assistance Land Petitioners use private donations to provide daily necessities for these petitioners while they are camped out in Hanoi. He says some are able to find odd jobs, like washing dishes, while they are in the capital, but many just barely survive.

They don’t have any jobs, any home. Just recently, we had to buy canvasses to shield them from the rain and sun, so they can find some shelter by sidewalks, trees or on the side of houses with big roofs for shade. We bought them canvasses to lie on. The ground gets very cold and without a canvass, they would get wet. It’s very hard for them. 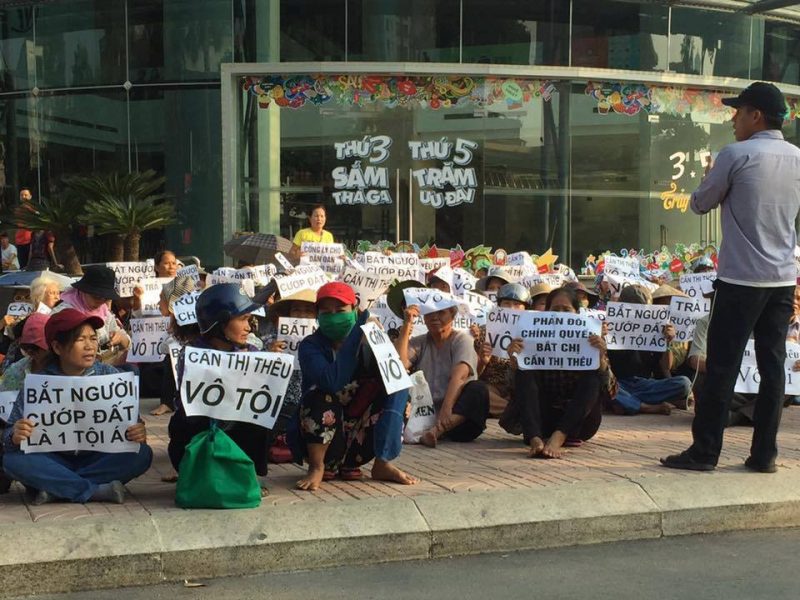 People are protesting the trial of land rights activist Cấn Thị Thêu, while family members and supporters are being barred from entering the courtroom. Their signs read: “Cấn Thị Thêu is innocent” and “Arresting people and stealing their land is an evil act.” Photo from the Facebook page of Trịnh Bá Phương

According to a recent report from the Corporate Social Responsibility in Asia, an estimated 80 percent of all complaints filed by aggrieved citizens to the authorities are related to land disputes and unfair compensation.

That number is growing and women seem to make up a vocal majority.

It’s perhaps because these disaffected women as well as men have nothing left to lose, that they are willing to risk everything.

On April 25, 2014, about a thousand security police and civil defense forces came to raze the land, which we hadn’t gotten paid for yet. We were empty-handed, but they had sticks, batons and guns. I was standing on a hut that we built to look over the cemetery. I was just standing there to film the scene, the oppression from the authorities against us. They arrested people down below, they beat them savagely. I just filmed. Then they came for me. They took my camera, they beat me. I don’t know when I fell unconscious. When I woke up, I was inside police quarters in Hà Đông district.

Both she and her husband were beaten and arrested, she says. She spent the past year in prison, charged with “resisting persons in the performance of their duties” under Article 257 of the penal code. She says her sons have been beaten bloody on other occasions as well.

After having spent almost eight years fighting, she was again found on the front lines mid-September with several dozen Dương Nội neighbors and fellow petitioners from afar, sleeping overnight in front of the police inspector’s headquarters. They denounced recent police intimidation and smear campaigns.

Thêu says the group scored a victory when after negotiating the timing and attendees of the meeting, the next day an official told her that the people have a right to petition without interference and that they were allowed to receive money donations and wear protest t-shirts.

Thêu says whether it’s through petitions, protests or local empowerment, she won’t rest until her land is hers again.

They can kill all five of my family members. But I think, you live only once and you die only once. So I will live in a way that they will see that their brutality will never threaten our will to fight. We land petitioners will hold on to our land until the end.

Listen more to the story of Cấn Thị Thêu through this podcast: