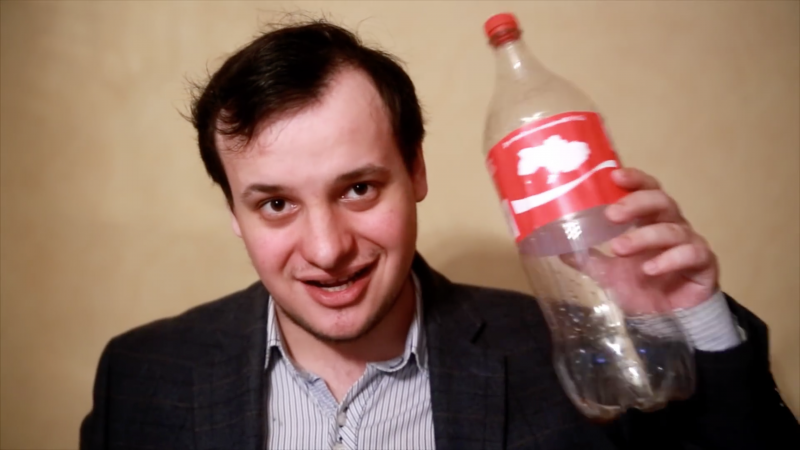 A YouTube video purportedly made in Ukraine has been causing a stir on the Russian Internet. In the video, a man stands in the doorway of a convenience store, holding a bottle of Coca-Cola that he has presumably just purchased. He notices that the bottle's label is adorned with a map of Ukraine—without Crimea. The words “For real patriots!” are printed above the map. The man approaches the sales clerk, shakes the bottle, and demands an explanation. She tries to reason with him, but eventually loses her patience and kicks the man out of the store.

The video was aired on Russian network television, presented as evidence of ethnic tension in Ukraine. This would make sense if it were real. But it's not—it is a prank video made by Russian Internet comic Mikhail Pashkov.

Indeed, “Separatist Coca-Cola” is one among various episodes of Pashkov's YouTube-based “Provocation Show.”

At the time of this writing, the video had almost 820,000 views on YouTube—including thousands of reactions shared by Internet users rejoicing at a Ukrainian woman rebuffing the frustrations of a “patriot” bemoaning the loss of Crimea, and thus appearing to side with Moscow’s annexation of the peninsula.

The initial response was so nasty that Pashkov uploaded another video about two weeks later, explaining that the “Separatist Coca-Cola” was a prank and admonishing viewers for leaving hateful comments on YouTube.

It is hard to know if Pashkov is being sincere here, given that his April 1 prank seems engineered to provoke exactly this sort of unkind reaction. According to his Vkontakte page, moreover, Pashkov also recently interviewed Graham Phillips—a British video blogger notorious for criticizing the Ukrainian government and championing Russian-backed separatists.

To prove that the footage was staged, Pashkov showed how the phony Coke labels were created, and published an alternate take of the same scene in the convenience store.

Then, months later, a talk show on Pervyi Kanal—Russian network television—used the video in a segment about the political situation in Ukraine, airing the footage as if it were real. After showing the clip, the show’s host, Artem Sheinin, called it “very nice,” and praised the woman in the video (who is actually an actress), saying she represents the real Ukraine.

Amused by the apparent mixup, Pashkov uploaded the segment from Pervyi Kanal to his YouTube channel. Before long, however, he says he was hit with a “strike” by Google, following a copyright complaint by Pervyi Kanal, apparently knocking out his ability to monetize videos and reducing the length of the videos he can share. This has happened to various super users, leading to concerns about overly strict enforcement of YouTube's copyright policies.

Pashkov says he tried to appeal the decision, arguing that he’s merely reclaiming content that Pervyi Kanal took from him without his permission, but Google has reportedly sided with the Russian TV station, refusing to offer more details about its decision.

For the past week, Pashkov has been sharing more content on the social network Vkontakte, where his channel has about half as many followers. He is also active on the Russian Internet forum Pikabu, where he’s fond of sharing “lifehacks” about navigating Russia’s legal system.

Meanwhile, the TV show that aired on September 21 is still archived on Pervyi Kanal’s website and remains accessible to anyone. There is no indication on the channel’s website that the video was actually an April 1 joke.