Puerto Rican Unity, a Bright Spot in the Darkness of an Archipelago-Wide Blackout 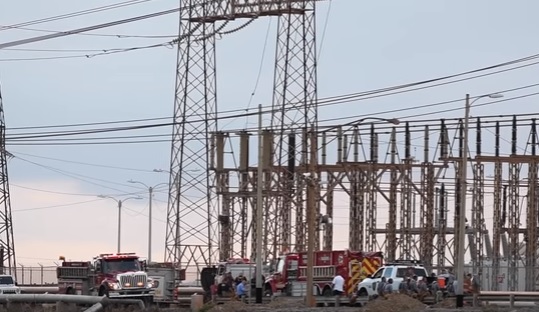 Workers from the Puerto Rico Electric Power Authority (PREPA) at the Aguirre power plant near the southeastern coast of Puerto Rico during the blackout which affected all the islands of Puerto Rico on Wednesday, September 21. Screenshot taken from video.

Things have more or less gone back to normal in Puerto Rico after a power failure on the afternoon of September 21 practically paralyzed the entire archipelago for three days, though for some people electricity was restored much later. Not even the island municipalities of Vieques and Culebra could escape the effects of the blackout, or apagón, as it's called in Spanish.

Immediate economic losses for the blackout have been estimated at around US$1 billion. The Department of Education reported that the amount of food that spoiled in the public school meal program due to the power failure is equivalent to at least $103,941. And some of Puerto Rico's reservoirs, like La Plata, have no emergency backup power, which meant that about 250,000 people were also left without water service.

During the blackout, things ran fairly smoothly, considering the almost complete collapse of basic services. No looting and no violence related to the blackout were reported. Because traffic lights weren't functioning, the roads were tricky (see video below), but no major accidents were reported either. At the busiest intersections, police were dispatched to direct traffic, which helped immensely.

The blackout meant hardship for Puerto Ricans, but it also brought out the best qualities of many. Many people who either had emergency power plants or who had their electricity restored offered friends and neighbors—and sometimes, complete strangers—the chance to either cook some food or recharge their electric fans, radios or smartphones. (Needless to say, the blackout did not prevent people from using social media to communicate and to keep up to date on the power authority's progress on restoring electricity.)

It also did not stop the commemoration of the Grito de Lares (The Cry of Lares) on September 23, which marks the day when the independence movement of the 19th century in Puerto Rico launched a rebellion against the Spanish government in the mountainous town of Lares in 1868. Back then, Puerto Rican freedom fighters were in solidarity with Cubans struggling for their own independence.

The cause of the blackout remains unclear as of this writing. A fire at the Aguirre plant located near the southeastern coast of the main island of Puerto Rico is what provoked the collapse of the entire system, but it is not yet known what caused the fire, pictured in the video below:

Puerto Rico's electrical needs are provided solely by the Autoridad de Energía Eléctrica (AEE) or Puerto Rico Electric Power Authority (PREPA) in English, a public corporation which has been in the news for the past few years due to the approximately $9 billion debt it is trying to renegotiate. Unsurprisingly, after the government has already spent $43 million hiring debt restructuring experts for the public corporation, some are calling for the privatization of PREPA, ignoring the implications that privatization would have on a country where over 40% of the population is considered to live below the poverty line.

Renewable energy has long been mentioned as the way to go for PREPA. Indeed, Puerto Rico has no shortage of options when it comes to alternative forms of energy. Because of its geographic location in the Caribbean, Puerto Rico could easily harness the power of the sun, wind and sea to satisfy its energy needs. But historically, the government has only halfheartedly, at best, pursued these options, opting instead to rely on fossil fuels to meet its energy demand.

The blackout also hit when Puerto Rico, a US territory with limited rights of citizenship, was already smarting from recent decisions taken by the US government that diminish its autonomy. The greater significance of the apagón was probably best expressed by Maritza Stanchich, a professor of English at the University of Puerto Rico at Río Piedras, who wrote for the Huffington Post a rather poignant observation:

The blackout spells the collapse of the Free Associated State—or “Commonwealth” as Puerto Rico has been called euphemistically—in even more tangible terms than all the seismic events of the past year, including two U.S. Supreme Court rulings that annulled Puerto Rico’s Constitution and sovereignty—or exposed it as the apparent lie it always was.

The blackout also portends the coming storm of the federally-imposed fiscal control board, instituted as part of PROMESA, the Orwellian-sounding law named for its acronym, Spanish for “promise.” President Obama’s recently announced appointees to the fiscal control board promise neoliberal economic austerity to do the bidding of vulture hedge funds, as well as social unrest.

With such distressing political and economic context, Puerto Ricans’ kindness and cooperation with their neighbors during the blackout was indeed a bright spot.