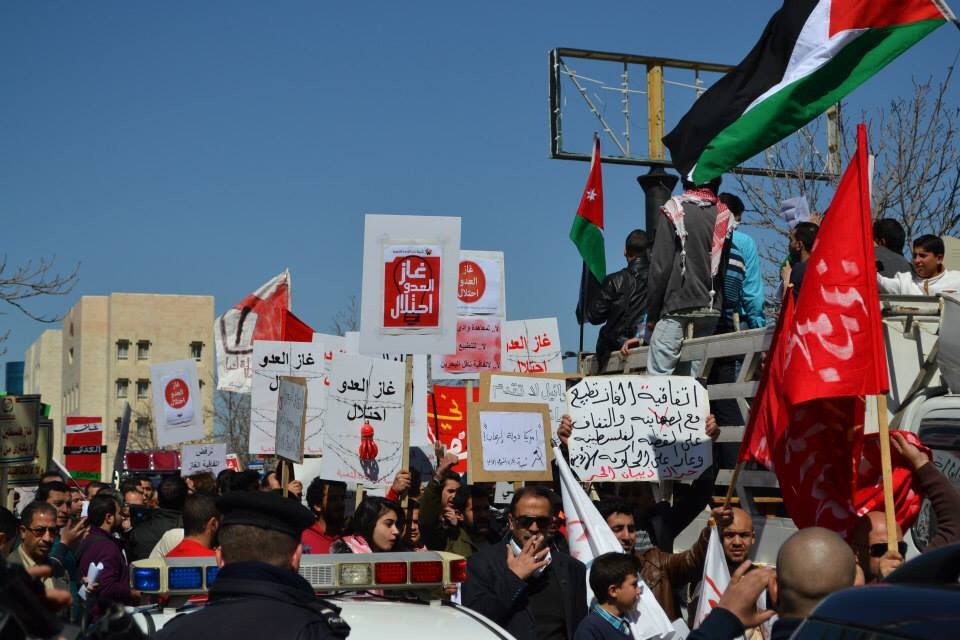 A protest in Amman, part of a national campaign by activists, syndicates, and unions, as well as political parties, to stop a gas deal between Jordan and Israel. Source: Khaled Al Shakaa on Twitter.

On September 26, 2016, the Houston-based firm Noble Energy Inc. announced that it and a consortium of energy companies have signed a deal to supply natural gas from the Israeli-occupied Leviathan natural gas field to the National Electric Power Company Ltd. (NEPCO), which is wholly owned by the Jordanian government. The announcement was met with condemnation and backlash from the Jordanian public, who still largely oppose any form of normalization with Israel, despite two decades passing since the signing of the Wadi Araba peace accords between the two countries.

By signing gas deal, Jordanian regime made every citizen a normalizer.We will subsidize future wars. cant live with this #غاز_العدو_احتلال

The deal was described as “historic” by the energy consortium, fulfilling Israel's ambition since the discovery of the field in 2010 of becoming a natural gas exporter. It will help Israel overcome the initial cost of developing the Leviathan field. According to energy consultant Amit Mor, “The development of the Leviathan project is crucial for the national security of Israel, which is currently getting all its gas from one field, the Tamar field. Thus, the diversification of gas sources is a must, and this will be enabled by the Jordanian market.”

This is not the first natural gas deal between Israel and Jordan. In February 2014, Israel signed a $500-million deal to supply 1.8 BCM of gas from the neighboring Tamar field to the Jordan Bromine and Arab Potash companies. Both deals have been widely unpopular among Jordanians, particularly among the anti-normalization and BDS movements. A poll conducted in February by the Jordanian TV station Ro'ya showed that 90 percent of respondents were against importing gas from Israel.

Nabd Al Balad poll in February points out that 90 percent of Jordanians are against the gas deal with the enemy.

The National Campaign to Overturn the Gas Deal With the Zionist Entity, a coalition of activists, syndicates, political parties, and former members of parliament founded in January 2015, has been leading the national opposition to the gas deal with the hashtag campaign #غاز_العدو_احتلال, which translates to “The Enemy's Gas Is Occupation.” The campaign had held a “people's court” earlier this month, accusing the government and the companies involved of jeopardizing national security and of supporting Zionist terrorism.

Pictures and Video: The National Campaign to Overturn the Gas Deal holds a people's trial for the gas deal with the Zionist Entity

In response to the newly announced deal, the campaign released a strongly worded statement that lamented the government's decision to go ahead with the deal despite continued Israeli violations of the 1995 Peace Accords. The campaign went on to call for a protest on Friday, September 30, which is expected to be the first major Friday protest on the streets of Jordan since the 2011-12 uprisings.

Campaign organizers also supported a call by the Herak Shababi, a youth movement that has been active since the 2011-12 uprisings, which held a sit-in on Tuesday evening in-front of the NEPCO headquarters. ِThe sit-in managed to attract almost 200 participants on short notice, before dispersing peacefully with a call to return to the street on Friday:

We will chant as loud as we can, no occupation, no forced normalization and no peace until the rights are returned.

Jordanian writer Hisham Bustani posited in an article for 7iber, stating, “Jordan does not need to import gas from Israel, after all, it does not need alternatives any time soon, as government press releases admit, Jordan's energy needs are secured from what we import through the liquefied petroleum gas platform that was opened last year in Aqaba.” Bustani went to showcase the variety of alternative energy projects that Jordan has launched in the past few years that have the potential to cover Jordan's energy needs.

Safa’ Al Jayousi, an environmental expert and advocate, also tweeted about the potential of renewable energy sources for Jordan.

Renewable energy sources—particularly solar—can provide Jordan with 60 times the amount of its electricity needs by 2050 without any deals.

Bustani also questioned the timing of the deal, which was announced a few days after Jordan held its national elections, and a day after the current government rendered its resignation, leaving no institution to be held accountable for the deal.

Jordanian writer Bara’ Hasaniya also lamented the hypocrisy of the deal happening so soon after the elections.

How can they trick us to believe in democracy in the country when they ignore the demands of millions of countrymen to not sign a deal with the enemy.

Twitter user Anadareee expressed her disdain that the signing of the deal came no later than two weeks after Israeli forces shot dead Said Al-Amro, a 28-year-old Jordanian from Al-Karak.

Write down the date 26-9, today we signed the deal of shame and subjugation with the Zionist enemy while the blood of Al-Amro isn't cold yet.

Jordanian writer Jaber Jaber expressed his concerns about the government resorting to censorship in order to limit media coverage of the deal, referring to the government's tendency to release frequent media gag orders, which Global Voices Advox reported on recently.

You better write quickly about the gas deal with the Zionist enemy before they release a gag order.

Jordan is unlikely to back down from the deal due to its strategic importance to the country's allies, namely the United States and Israel.

With Egypt discovering its own strategic gas reserves, and the rest of the region embroiled in war, this leaves Jordan as the only viable customer for Leviathan. The development of the strategic gas field will open the way for a potential gas deal with Turkey, which needs to resolve its political differences with Cyprus first, before any deal can be made. This will break the Russian monopoly over natural gas in Europe, to the collective relief of the US and its allies across the Atlantic, as well as anchor Israel's economy and security, effectively hitting two birds with one stone.

The outcome of the protest on Friday will show if the Jordanian regime will be successful in weathering the initial backlash and wearing down local opposition to the deal.