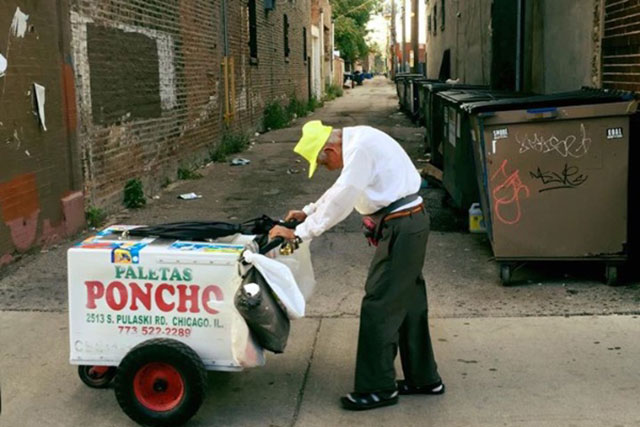 Fidencio Sanchez, 89, pushes his popsicle cart through Chicago's Little Village neighborhood. He recently attempted to retire but had to return to work to make ends meet after the death of his daughter. (Photo Joel Cervantes Macias / GoFundMe)

Chicago-born Joel Cervantes Macias was driving in the windy city (the name given to the US city of Chicago), when he spotted a 89-year-old Mexican paletero man called Fidencio Sanchez. In Mexico, a paletero man is a street seller of popsicles and ice-cream, which are sold from a pushcart called a paletería. Fidencio migrated to the United States from Mexico decades ago. Cervantes was so impressed by the effort the man was putting in pushing such a heavy cart around the city that he took a picture of the vendor. He posted it to his Facebook, and commented: “I respect this man to the fullest.”

After Cervantes took the picture and bought some popsicles, he had a long conversation with Fidencio. The paletero told him that his daughter passed away recently, leaving him in charge of her two children. Fidencio had to work every day to make enough money to support his grandchildren and wife. Cervantes was shocked. He knew he needed to do something. One his friends, Joe Loera, had the idea to start an online campaign to raise funds for “a community retirement” for this hard-working man.

Mr. Fedencio Sanchez and his wife recently lost their only daughter and are still heartbroken about the situation. His elderly wife was selling paletas also to help pay bills, but she fell ill and can't work anymore. We're trying to raise money to help him with whatever we can. Anything helps. Let's all pitch in and help make life a little easier and brighten both of their day.

Twitter users in the United States and in Mexico made many uplifting and positive comments about the aid the paletero received, using various hashtags such as #FidencioSanchez and #JoelCervantesMacias:

some sunshine in a rough week. thx to #JoelCervantesMacias for reminding ppl of their humanity. amor para #FidencioSanchez -you deserve this https://t.co/FZUb4KxCzt

I heard about this story and I had to contribute…God bless this sweet man and to Joel Cervantes Macias who… https://t.co/Wrnt04dGwW

Most social media users left positive comments. However, other bloggers and journalists reflected on deeper problems related to Mexican and other Latino migrants in the United States. For example, a correspondent for the TV channel Fusion, Juan Rivas, wrote an article on the ugly truth behind the vulnerability of Fidencio, especially regarding the evident racism against Mexicans in the US elections:

Rivas also mentioned what many old Latinos face: not enough money saved for retirement. Sadly, this reality is worse if the person lives in the United States without documents:

One-fifth of adult undocumented immigrants lives in poverty, according to the Pew Research Center. And folks who are struggling to put food on the table every night are not usually saving for retirement.

‘Street vendors are living day to day,’ said Martin Unzueta, executive director of Chicago Community and Workers’ Rights, a group that works with street vendors. ‘There are some street vendors who have social security cards, but that doesn’t mean they can send money [for retirement] to the Social Security Administration.’

Michele Chen, from progressive news organization TruthOut, reflected on Fidencio's narrative, and invited her readers to think about the inequality faced by many aging immigrants of color in the United States. She also proposed long-term solutions that could help people like Fidencio “to live with dignity” when they most need them:

Beyond GoFundMe, immigrant seniors need an infrastructure that allows them to live with dignity. The real solutions come through strengthening public services for the aging community — and rebuilding social welfare to be cognizant of structural racism and historical inequities. Seeing an elderly man like Sanchez pushing his cart should evoke sympathy, yet it's not just misfortune, but enforced inequality, that weighs upon the weary bodies of migrant elders.

Meaningful financial safeguards would be a basic step toward equity, with measures for debt relief and legal assistance to fight housing distress and eviction in communities of color. The foreclosure epidemic, the recession's fallout, compounds decades of systematic predation, payday lenders and other exploitative credit systems that feed on poor communities and has hit older Latinos at twice the rate of their white peers.