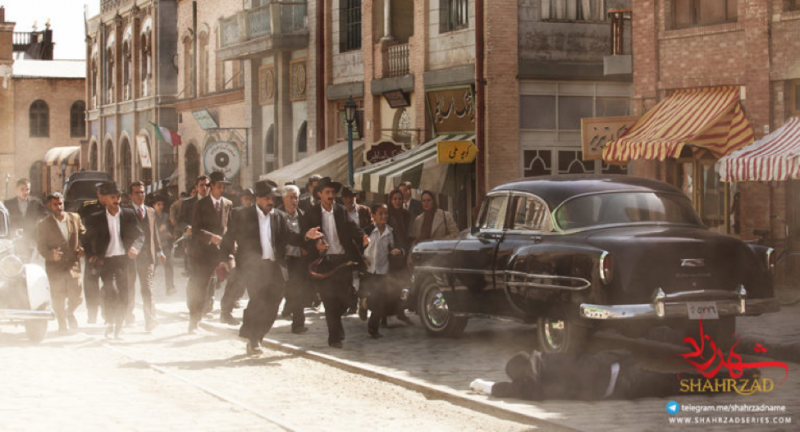 A still from “Shahrzad” recreating scenes of the chaos in the streets of Tehran during the period of the 1952 coup d'etat (Source: shahrzadseries.com)

As was long widely believed, and confirmed by documents declassified a few years ago by the CIA, the Iranian coup of 1953 was initiated as the result of United States’ increasing fear of Iran’s possible turn toward communism. It resulted in the toppling of democratically elected Prime Minister Dr. Mohammad Mosaddeq. Mosaddeq was the leader of the National Front, an alliance of politicians who shared anti-imperialist sentiments toward Britain.

The National Front advocated limited judicial reforms and the limiting of the authority of the Shah in accordance with the Constitution of 1905. They nationalized the oil industry, which led to an embargo by Britain, which in turn pushed Mosaddeq’s government to completely cut diplomatic and economic relations with the British.

The oil crisis and the economic depression that followed, along with the increasing class consciousness of the working class and peasantry, especially in the northwest of Iran, intensified the struggle that already existed between Iran’s traditional ruling class (including the Shah, landowners and the clerics), the bourgeoisie, and the proletariat/peasantry. This ignited fears of communism among world powers, motivating the CIA and MI6 to to sponsor and plan a coup against Mosaddeq, with the assistance—or at least moral support—of Iran’s ruling class. On the day of the coup, a hired mob played a crucial role on the streets of Tehran, creating chaos and attacking several newspapers offices. 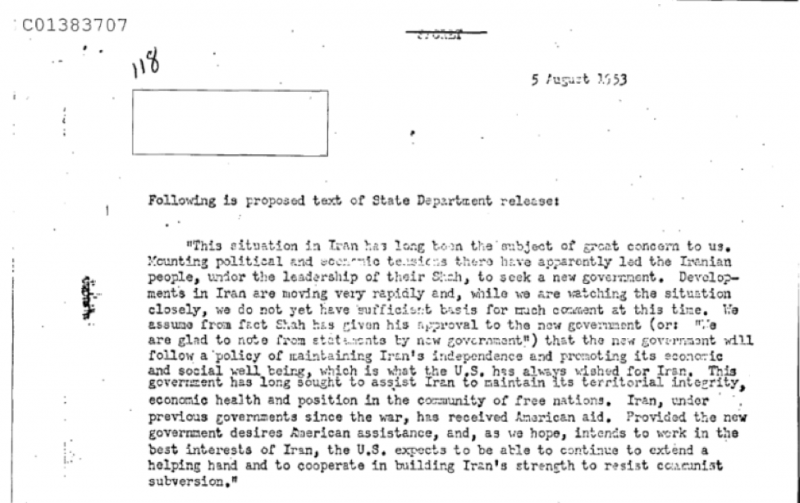 A press release drafted by the US State Department anticipating the successful overthrow of Mosaddeq, and crediting “the Iranian people, under the leadership of their Shah.” Mosaddegh was ousted two weeks later (Source: NSA Archive)

In the Iranian television series “Shahrzad”, it is the accidental killing of a member of that mob that changes the course of the protagonists’ lives. Written by Hassan Fathi and Naghmeh Samini, the first season premiered in fall of 2015 through domestic DVD and online distribution. The most expensive production of its kind ever produced in Iran, Shahrzad has been so successful that, according to the BBC Persian program Pargar, it has become an engine of the cultural industry, generating sales of jewelry and commodities inspired by its story and characters.

“Shahrzad” is the story of the romantic relationship between two characters, Shahrzad and Farhad, and how it is affected by the coup of 1953. Farhad, whose name alludes to a figure from medieval Persian romantic literature, is a journalist. His father owns a carpet shop in the bazaar. His beloved, Shahrzad, is pursuing her dream of becoming a doctor. Shahrzad’s father has a restaurant in the city. Economically speaking, both Shahrzad and Farhad’s fathers are completely subordinate to a big landowner and Godfather-type figure called Buzurg Aqa.

On the day of the coup, Farhad accidentally kills a member of the mob that attacks his office. Consequently, Farhad is arrested and sentenced to death by the post-coup government. Although Farhad is granted a pardon, Buzurg Aqa—who is secretly the commander of the mob—forces Shahrzad to marry his son-in-law Qubad. This is the only way for Shahrzad to secure Farhad’s safety, and it is also desirable for Buzurg Aqa, whose own daughter is unable to bear a child and give him an heir to his wealth. Farhad and Shahrzad’s fathers, driven by their indebtedness to Buzurg Aqa, also push for Farhad and Shahrzad to separate.

“Previous to “Shahrzad”, almost all post-revolution dramas and narratives stressed the decisive role of imperialist forces, even to the extent of neglecting or downplaying domestic agency altogether.”

As in any historical narrative, what is omitted is as important as what is revealed. Like other forms of cultural production that happen in Iran through official channels, TV series distributed through domestic DVD and online distribution networks are also meticulously monitored by governmental censorship organs, though it is widely claimed that censorship is less stringent for works distributed through these channels. A look into the deeper historical context of “Shahrzad”, however, reveals some bold omissions.

According to the “Shahrzad” narrative, the political players in post-coup Iran were divided into three categories: the sympathizers of Mosaddeq, the leader toppled by the coup, exemplified by both Shahrzad and especially Farhad; the oppressive ruling class (the Shah, landlords, etc.); and the communist Tudeh Party. These three are depicted in the series as ‘the good,’ ‘the bad’ and ‘the ugly’, respectively, and they dominate the narrative’s presentation of history, which conspicuously omits the role of the working class, which, to be fair, is almost always omitted, or only depicted if and to the extent that it is under the leadership of the clerics.

Also absent from the “Shahrzad” narrative are religious forces. Not only are there no clerics in the series, but no key figure exhibits any explicit religious convictions. Most significantly, perhaps, there are no American agents or civilians in the movie. Even though the coup has been attributed to the secret agencies of the United States, with President Obama referring to it as “well-known history” in a 2009 speech at Cairo University, in “Shahrzad” the coup’s main protagonists are nationals: the Shah, his court and landowners. Why?

Let us start with the erasure of US forces. President Obama’s 2009 acknowledgment of the US’s role in the 1953 coup was one among a series of reconciliatory gestures for “moving forward.” The election of President Hassan Rouhani in 2013 was a sign that this shift, and the possibility of moving forward, had advocates not only in the United States, but also in Iran. 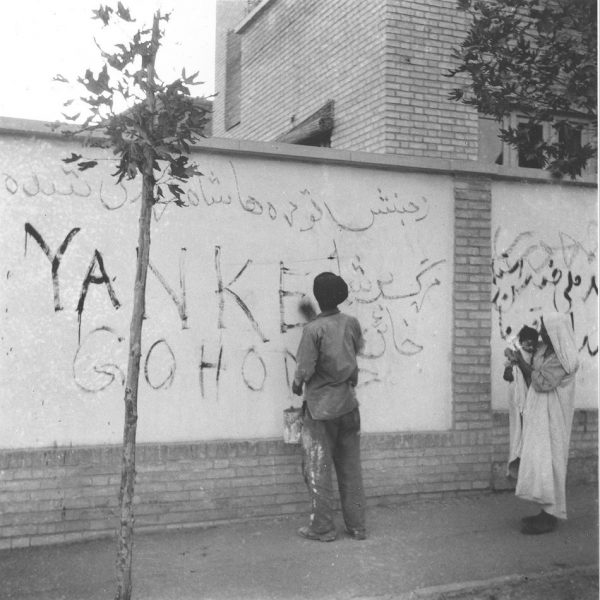 A resident of Tehran washes “Yankee Go Home” graffiti from a wall in the capital city of Iran, Aug. 21, 1953. The new Premier Gen. Fazlollah Zahedi requested the clean-up after the coup d'etat which restored the Shah of Iran in power. (PHOTO: Pahlavi Dynasty via Wikimedia Commons)

Previous to “Shahrzad”, almost all post-revolution dramas and narratives stressed the decisive role of imperialist forces, even to the extent of neglecting or downplaying domestic agency altogether. They placed this coup in an ahistorical setting in which, in the absence of any concrete social and economic relations, it is the imperialist forces that have the final say.

The omission of US antagonists from “Shahrzad” might therefore be read as a response to those earlier works—as well as a contribution to the effort to “move forward” and forge stronger ties with the US in post-nuclear deal Iran.

For this process of “moving forward” to be effective, however, requires a concrete knowledge of the social and political events that resulted in the coup. The fading out of the US role in “Shahrzad” is not accompanied by a more concrete narration of social and economic relations and class struggle before and after the Revolution. Which brings us to the more provoking elimination of religious forces mentioned above.

Not only does it glorify the deposed Mosaddeq, “Shahrzad” also purges its narrative of Ayatollah Kashani, the spiritual leader of Fada’iyan Islam. Kashani was the most powerful political cleric of his time. He shared anti-imperialist sentiments with Mosaddeq and became the head of parliament for a period during Mosaddeq’s government. However, as history unfolded, the alliance of the National Front and Kashani became a fragile one. Kashani withdrew his support of Mosaddeq during the coup, and, as several historians suggest, probably even assisted the coup plotters. In “Shahrzad” the character of Buzurg Aqa, with his authority over the mobs, functions as a Kashani figure in disguise. 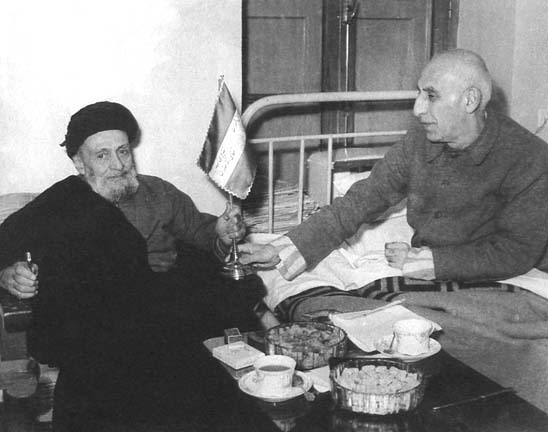 The omission of clerics from the narrative also forces us to consider the ideological historiography of the Islamic Republic. Although the the Islamic Republic’s official history has changed over time, including some issues and putting aside others, it has been very insistent and consistent with regard to certain subjects. From an official standpoint, for instance, no state-sanctioned cultural product of Iran should glorify nationalist forces (exemplified by Mosaddeq and the National Front) when the alternative of the religious front is available. Put differently, the overriding “Good” in any historical account can only be the religious front.

This is clearly the case with depictions of the revolution of 1979, or of the student movement of the 1970s. The Islamic Republic’s official historiography even rearticulates the religious sentiments of medieval Persia as a quest for the ideal society which was eventually established centuries later by Ayatollah Khomeini. One example of such revisionism is “Jalal Al-Din”, a series narrating the first few years of life of the famous medieval poet Rumi. In the series, Rumi’s father advocates exactly the system of governance practised today in the Islamic Republic.

“As the story of “Shahrzad” shows, the political and economic aspirations, desires, and interests of any historical moment entail a revision of what happened in the past.”

Unlike these previous TV series, “Shahrzad” glorifies nationalist forces. Not only are the protagonists followers or sympathizers of the National Front, but the erasure of all the leftist sympathizers who were killed after the coup effectively renders Hossein Fatemi, Mosaddeq’s foreign minister, the coup’s only “martyr”. In this sense, in its clash of interests with the revolutionary historiography of the Islamic Republic, the series can be said to adhere to an Islamic “bourgeois” historiography.

While both versions are part of the official historiography of Islamic Republic, they appeal to a different audiences. The Islamic bourgeois version attracts the young, urban middle class, as sometimes it blurs religious messages and instead emphasizes a nationalist discourse, which in turn could easily have appeal in conservative circles with deep roots in the military forces.

Yet, while the dominant “revolutionary” ideology fears nationalist viewpoints, making only seasonal uses of them at times such as during an economic crisis, the bourgeoisie finds them to be of general economic benefit.“Shahrzad” reveals the ways in which the historiography of the Islamic bourgeoisie is both different from, and similar to, the dominant “revolutionary” historiography. Both versions, for instance, dismiss leftist groups as tools of the Soviet Union, thereby negating any contribution by the working class to the cause of the nationalization of the oil industry. And both versions share a hatred of the Shah and his court.

Faulkner’s famous quote, “the past is never dead. It is not even past,” applies very much to Iran’s 1952 coup and its contested narratives. As the story of “Shahrzad” shows, the political and economic aspirations, desires, and interests of any historical moment entail a revision of what happened in the past. It shows that it is not only the present and future, but also the past, that is a site of constant political struggle.

Most importantly, it shows us that any effort to “move forward” redefines the past, only to confine it with a new, but temporarily beneficial, frame.

Mahdi Ganjavi is a Ph.D. student at the department of Leadership, Higher and Adult Education in University of Toronto. His essays, reviews, and translations, have appeared in the International Journal of Lifelong Education, Encyclopedia Iranica, BBC Persian, the Bullet, and Radio-Zamaneh. A version of this essay that originally appeared on the Ajam Media Collective online space.