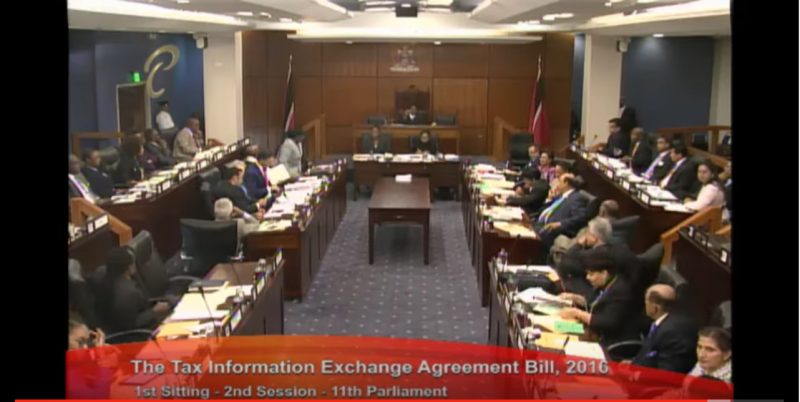 A screen shot of a Parliament Channel YouTube video, showing the parliamentary debate of Friday September 23, 2016 in Trinidad and Tobago.

The deadline for Trinidad and Tobago to become a signatory to the United States’ Foreign Account Tax Compliance Act (FATCA) is September 30, 2016. The law, which the US Congress enacted in 2010, strives to ensure that US citizens and residents with financial assets outside of the country are paying taxes.

The legislation gives US banks the power to withhold a portion (up to 30%) of payments made to foreign financial institutions that do not agree to release information on their customers who have US accounts. In fact, they can even refuse to do business with them altogether. Non-compliance would therefore have far-reaching effects: critical banking services such as credit card use, wire transfers and remittances would be cut off, Trinidad and Tobago's economy — already sluggish thanks to low energy prices — would further weaken, and the general cost of living and doing business would increase.

Yet, the bill has still not been passed in the country's parliament. Even though the government is unanimously voting for compliance, the current opposition — which had put forward the bill when they were in government — now appears to be stonewalling its passage. The government has 23 members in the House of Representatives, but 26 votes are needed to pass the bill. Despite its insistence that “nobody wants to pass this bill more than [them]”, in the parliamentary sitting of September 23, 2016, every single member of the opposition voted “No” (54:46 on the timeline of this video). For its part, the opposition has accused the government of “politicising the issue”.

The leader of the opposition, Kamla Persad-Bissessar, explained that she and her colleagues are worried about “the draconian provisions in the Bill which are in no way necessary to give effect to the agreement”.

In his presentation to parliament, Minister of Finance Colm Imbert noted, “Clause 8 — the opposition has a problem with this. Nothing in Section 4 of the Income Tax Act, Data Protection Act or any other law of like effect prevents the disclosure of information. The opposition maintains that this strips our citizens of any protection that the law may give to them.”

Although the government has said that they addressed three of the opposition's seven concerns, the matter never went to debate. After Imbert made his presentation in parliament last Friday, he asked the speaker of the house for a one-hour adjournment, during which time the two sides could sit down and hammer out the amendments to the bill. But the opposition refused. Soon after the parliamentary sitting resumed, the opposition leader was reprimanded by the house speaker and asked to leave. The rest of the opposition (save one member) — in an apparent show of solidarity — walked out.

Theoretically, parliament would be able to meet on September 30 and pass the bill just in time to meet the deadline — but that is the date on which the minister of finance will present the country's 2017 budget, so there is no chance of FACTA being tabled for discussion then. Unless the United States agrees to extend the deadline, which at this point seems likely, Trinidad and Tobago will be left in a tenuous position. No matter what happens, though, netizens are incensed.

Quite unhelpfully, Finance Minister Colm Imbert booked his Budget speech on the same day. Presumably, Imbert did not foresee that the [opposition United National Congress] UNC would feign such a startling ignorance of what is at stake here.

Of course, that is not to say that he agreed with the legislation so much as he resigned himself to the fact that compliance had to happen:

In essence, every bank in the world will become non-paid informants of the IRS.

The cost of America’s witch hunt for tax evaders was estimated to be around eight times the value of income the IRS expects to recoup. So, to make this exercise financially viable, the IRS will let the banks pick up the tab for their investigation of US citizens who are using their services. […]

So, should Trinidad and Tobago object to accepting such a costly and invasive excursion into its own banking system by the Yanks? Of course!

We should also refuse to fork out TT$300 for a plate of pasta at those stoosh [posh] restaurants in west Trinidad.

But if you are there already and want to get fed, you will pay. And if you want access to the US banking system, you will do the same.

Otherwise, the IRS will start by withholding 30 percent of financial transfers—even Moneygram and Western Union—to locals, whether they are American or not, until they can prove they are not involved in tax evasion.

Meanwhile, the Bankers Association of Trinidad and Tobago supports the bill, the business chambers issued calls for compliance and the country's Securities and Exchange Commission has provided its feedback.

Netizens, however, appear to be divided across political lines. One Facebook user, Gideon Charles, called the opposition's refusal to vote for the bill a desperate attempt at destabilisation, speculating that the opposition does not want FACTA compliance “because it would divulge the pilfering, the embezzling of taxpayers’ money by the former, now Opposition UNC government”. Others were more tongue in cheek, while Facebook user Susan Charles called out the minister of finance on his political posturing:

Still, Imbert insisted that “the bill […] is identical to the bill prepared by the People's Partnership government. It's the same bill, word for word.”

With the passing of the bill still in limbo, social media users in the Caribbean nation wonder whether the government and opposition will come together for the greater good — or in the words of Mr. Live Wire:

Russia President Vladimir Putin also railed against FATCA, which he described as an attack on Russian sovereignty. Then, 24 hours before the US deadline, Putin caved and signed on 30 June 2014.