Two Years and Still No Justice, but Mexico Has Not Forgotten Ayotzinapa's Students 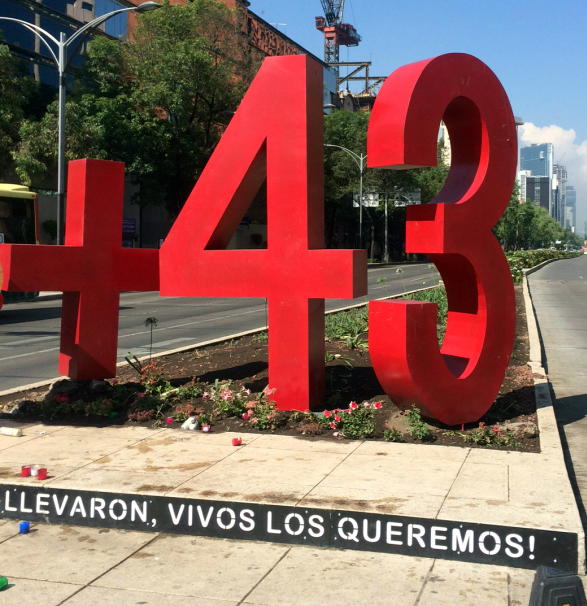 “Alive they took them away, alive we want them back” Memorial to the students who were victims of a forced disappearance, located in the Reform Promenade in Mexico City. Image by author and published with permission.

September 26, 2016 marks the two-year anniversary of a series of violent acts in which a group of students from the Raúl Isidro Burgos Rural Teachers’ College – with its headquarters in Ayotzinapa, in the western Mexican state of Guerrero – were deprived of their freedom by local police and later handed over to an armed group identified as the Guerreros Unidos, or “United Guerreros” (a play on words, as guerreros also means “warriors” in Spanish). The Ayotzinapa case – as this tragic series of events is known – remains unpunished.

The forced disappearance of 43 students from Ayotzinapa marked the start of President Enrique Peña Nieto's fall in popularity and was followed by a series of high-profile corruption and/or conflict of interest scandals that implicated the president and his closest partners. Added to these scandals was the discovery of other violent events in which government forces committed extrajudicial executions of civilians, such as the Tlatlaya case and the Apatzingán Massacre, to mention only a few.

Twenty-four months have passed since the students disappeared. Two different people have headed the office of the Attorney General of Mexico (PGR, in Spanish), an office that is part of the Public Ministry (Mexico's prosecuting authority) and conducts investigations. More than 110 people have found themselves subjected to preventative detention, accused of being involved in the Ayotzinapa case, and not a single one has been declared criminally responsible, that is to say, condemned by a judge.

Mexican institutions’ standard: 111 detained in the #Ayotzinapa case and no one knows for sure what actually happened. How stupid, right?

Perhaps the most important news in the days leading up to Ayotzinapa's second anniversary is the resignation of Tomás Zerón, who occupied the post of director in chief for Mexico's Criminal Investigation Agency. Zerón found himself in the cross hairs of both the missing students’ families and the Interdisciplinary Group of Independent Experts (GIEI), which helped in the investigation's inquiry and was appointed by the Inter-American Commission of Human Rights.

Their complaints against him were based on a video that circulated in which Zerón is seen wandering around the place where, according to the official version, the students’ remains were burned. It is also believed that Zerón “sowed” evidence intentionally so that it would be found by experts who were working in the area.

Zerón's resignation has been demanded by the families of those who disappeared and by Vidulfo Rosales, who acts as their legal adviser:

We demand the resignation of Tomás Zerón for manipulating the evidence in the San Juan River, in Cocula.

More than 43 are missing

In the maelstrom of indignation, and perhaps in trying to keep the symbolism of the now emblematic number 43, hardly anyone talks about the other victims of that bloody day. These victims are people who, although they did not suffer from forced disappearances, were still severely wounded from the violence.

Such is the case with a student by the name of Aldo Gutiérrez Solano, whose story was referred to on the Latin Times’ website:

Aldo Gutiérrez Solano is one of the students from the Raúl Isidro Burgos Rural Teachers’ College who [was] wounded the night of September 26, 2014, in Iguala. The Ayotzinapa case caused outrage throughout all of Mexico and abroad, [not only for] the 43 students who have disappeared and possibly been cruelly murdered by a criminal group and local Guerrero officials, but also [for] those who died that night and those who were injured and continue to suffer from the indifference and little consideration from the federal authorities.

In August 2016, it was reported that student Aldo Gutiérrez was hit that fateful night by a projectile (bullet) that destroyed 65% of his brain. According to the neurological expert who has traveled from Cuba to attend to him, he remains in a “vegetative state” with little chance of recovery.

Thus, two years after the forced disappearance of the 43 students by government forces and the injuries caused to others, the Attorney General of Mexico (PGR), now headed by Arely Gómez (a member of the same party as President Peña), has been remiss in presenting a theory of what actually happened that differs from the “historical truth” suggested by her predecessor Jesús Murillo.

This same PGR has been incapable of obtaining convictions against those presented before the judiciary as responsible for Ayotzinapa. In this same vein, Twitter user Rubén Cárdenas threw out the following advice:

What would be just is a double arrest in the PGR: [One] for Jesús Murillo Karam for inventing the “historical version” and [another] for Arely Gómez as accessory.

Arely Gómez, however, has insisted that the investigation, after so many months, is still ongoing:

“Ayotzinapa is not a closed case”: Arely Gómez |

The story of the Ayotzinapa case continues to be written. For the families of the missing students, the search goes on. For all Mexicans, the episode remains fresh in their memories.

You can read more about the so-called historical truth of the case and about the participation of foreign specialists here.