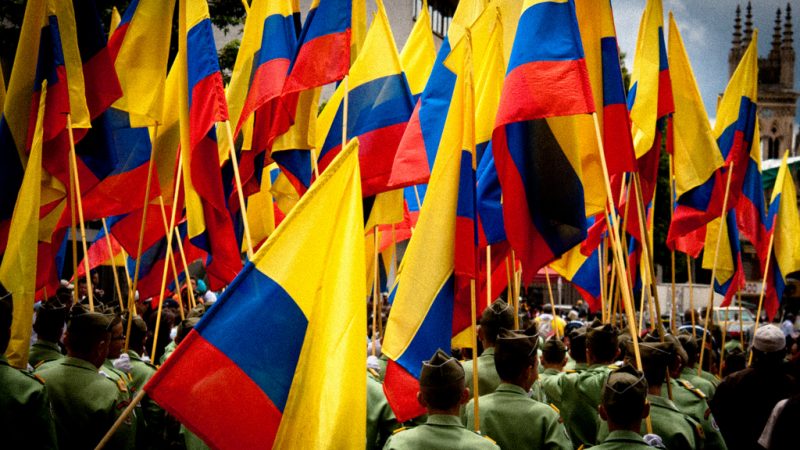 Colombia is currently living through a historic process that could put an end to the horrific armed conflict that has dominated the country's narrative for more than 50 years. On October 2, 2016, Colombians both inside and out of the country will vote to either accept or reject the signed agreement between the government and the militant group Revolutionary Armed Forces of Colombia (FARC). The negotiation process, which has taken years of complex and difficult decisions, has been amply discussed in the public arena, a discussion that reflects the strong divisions within Colombian society.

These opinions are a good mirror of each group's own context. In general, these point of views collide in rural areas, where people are for and against the FARC. In cities, views are conflicting — on one hand, there are those who have not been directly touched by the war, and on the other there are those who fled violence only to come to live in urban areas marked by poverty and exclusion.

In order to transform the debate and inform people about the peace agreements, numerous information campaigns have been launched, including the animated series “Dejemos de matarnos” (“Let's Stop Killing Ourselves“). Narrated by historian Diana Uribe, the series explains the minutiae of the peace agreement and confronts the fears surrounding the agreement. Uribe claims in the video how opinions and misinformation are affecting the debate: “People are not against the peace process, they're against the rumors about the process.” The series also link the Colombian process for peace with those of other countries, such as Ireland, Rwanda, and Guatemala.

Every time nations go through a peace process, humanity as a whole takes a step forward. Not only because peace elevates us as a species, but also because each peace process is a learning experience that gives us the keys for the next one. Just like Ireland and South Africa are teaching the world how to overcome hatred and violence, so too will come the day when Colombia will add its story to the rest so that others can learn from what we have done.

Other analyses of the road to peace and its possible regional significance were explored by the program “Claves” (“Keys” in English), in which different Latin American analysts compared the Colombian peace process with that of El Salvador:

Dagoberto Gutiérrez, a guerrilla chief on the civil war period who was a negotiator and signer of the Salvadoran peace agreements, said:

What was negotiated was the end of the war, not the end of the conflict. The civil war ends [in El Salvador], a civil war in which two parts of the same society fight each other; then the doors of another war, the current war, a social war, open.

While Mauricio Ernesto Vargas, a retired general and a signer of the Salvadoran peace agreement, commented:

It is better to coexist than to kill ourselves, to talk with each other than to ignore each other […] [Colombians] should not confuse the pacification process with the process of peace building.

And Jaime Martínez, director general of the Public Security Academy and director of the Center for Criminal Studies of El Salvador, observed:

We [Salvadorans] won so much with the peace agreements. With the imperfections we have now, including the new unrest […] we are much better off than [we were during] that dark, terrible, time of madness that happened during the war that we lived through.

‘The sons of the rich do not go to war’

The Colombian conflict has been characterized by a multiplicity of versions, histories and scenarios. It is a conflict that has had repercussions within and outside of the country. Colombia has the second-highest number of internally displaced people due to conflict in the world (6.3 million people, according to the UNHCR), and much of the diaspora who have gone in search of better opportunities in other Latin American countries have fled from either direct or indirect violence from the armed conflict.

Young people especially have been the most victimized. Video testimonies that have circulated across social media emphasize the fact that many of those who participate in the wars — no matter the side — are youth who are impoverished and victims of exclusion. As Leonard Rentería, a community youth leader, said in a powerful video, “The sons of the rich do not go to war.” “I Never Imagined Colombia,” a collection of testimonies gathered by Patricia Barón, Martha Lucía Jordán and Omar Rincón, recounts years of displacements, violence, wielding weapons and reintegration first person:

I have not forgotten the past […] because those are things that have made me grow. I have told you that there are moments in which I regret everything, but it is that I cannot…I regret the way in which now there are people who see me, I don't know, as a complete stranger […] Before, I did not think what I think now; before I thought that my world revolved around what I was living in the forest and I did not look ahead to anything nor behind. But the result is that ever since I left [the guerrillas], things are changing for me, and now I am here, with all that I have gone through and known, [and have] learned of people.

Colombia between a Yes and a No

The debates and the polarization on this subject are centered around the vote that will decide the fate of the peace agreement. The campaigns based on a “Yes” for peace defend it with the idea that it brings Colombians a step towards a more united Colombia and that it can move the country past a war that has scarred various generations. Those who advocate voting “No” fear that the country is submitting to the FARC, that its members have places in the Senate, and that their crimes will go unpunished.

The number of voices across sectors that see hope in the peace process, however, are multiplying. Expectations are high that the agreement can be part of a process of forgiveness and reconciliation that will establish a more united Colombia. And it is hoped, likewise, that the agreement can strengthen relations with the rest of the region and help Colombians dedicate themselves to the biggest challenge of ending the conflict: the daily and collective construction of a long-lasting peace.

GV Face: How Colombians Are Trying to Understand Peace

On September 27, we'll analyze the conflict's context, compare Colombia's current peace process to others around the world, discuss the upcoming referendum and talk about how Colombians imagine their future after the war.

Read our past coverage of the conflict and Colombia's road to peace: