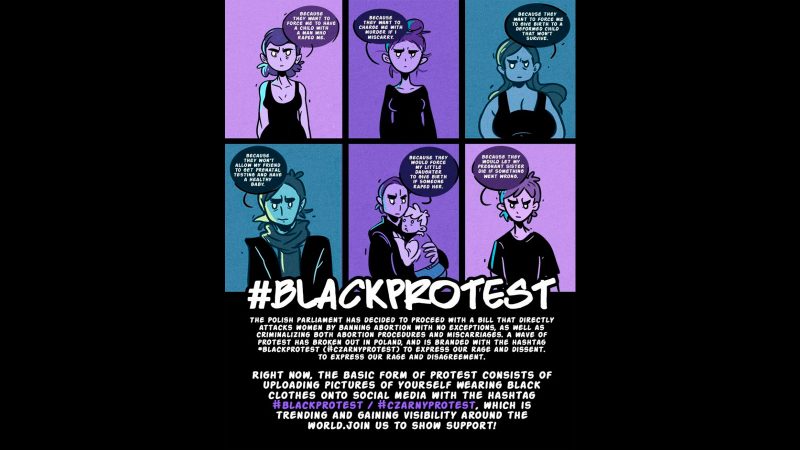 In the face of a “Black Protest” movement that has gripped the Polish Internet and several city squares throughout the country, the Polish Parliament voted in favor of moving ahead with legislation that would outlaw abortions in nearly all circumstances, introducing prison sentences for both women having the procedure and doctors who perform it. The lawmakers’ decision has already led to even more protests.

This Friday, members of parliament supported the controversial draft law's development, voting to refer it to a legislative committee for review and revisions. Lawmakers also voted to dismiss another piece of legislation that would have taken Polish reproductive rights in the opposite direction, liberalizing existing laws.

Poland's parliament is currently controlled by the rightwing Law and Justice Party, which enjoys the support of the Roman Catholic Church.

Critics of the push to restrict abortion rights even further in Poland say the new law would be “hell for women,” referring to a famous collection of essays by the Polish writer and doctor Tadeusz Boy-Żelenski, who in 1930 described the suffering endured by women in that era as a result of limits on reproductive choice.

Opponents of the new proposed abortion ban list several nightmare scenarios that would result, if the law is passed, such as forcing women who are raped to give birth to children, and even throwing criminal suspicion on mothers who miscarry naturally, raising police concerns that the miscarriage may have been deliberate. The one narrow exception that law would preserve for carrying out an abortion—instances when a mother's life is in danger—will put doctors in the dangerously awkward position of deciding when a pregnancy's threat to a mother's life is “direct enough.” Making the “wrong” decision in these cases could presumably land a physician in prison, too.

I say NO to prison for abortion, I say NO to #Poland where miscarriage is a crime #CzarnyProtest pic.twitter.com/B4fYUEqI2Q

The backlash against Poland's controversial legislation is no longer restricted to Poles, either. Internet users from around Europe and the United States have joined the protest movement, sharing photos and posts expressing solidarity with Poland's pro-choice demonstrators.

Kasia Babis, a Polish illustrator, published a poster in English calling people to join the “Black Protest,” depicting some of the legislation's likely consequences. At the time of this writing, the poster has more than 3,000 “likes” on Facebook and more than 1,800 “shares,” including one by noted libertarian and Wikipedia founder Jimmy Wales.

After the vote in the parliament this weekend, the left-wing party RAZEM announced a series of “Black Protest” demonstrations against the bill in nine major Polish cities on Sunday, September 25.

At the same time, many spontaneous solidarity gatherings took place or are planned abroad, including rallies in London, New York, Vienna, and Berlin.

Facebook event: International Solidarity with the Women of Ireland and Poland
Tweet: Solidarity Rally against abortion ban in Poland and Ireland will take place in Vienna on September 29. #BlackProtest