The number of people who registered to vote as ethnic Hungarians dramatically increased between Croatia's last two elections. Why? Some say it is due to organized crime, citing intimidation and bribing to ensure victory for the candidate favored by the country's ruling party.

While election fraud had been endemic to the Balkans, it wasn't a major issue in Croatia's elections in recent years. Due to the deadlock that forces the winning conservative HDZ to form coalitions with smaller parties, however, the political significance of potential “swing” deputies was abnormally high in elections on September 11.

The Croatian Parliament is composed of 151 members elected to a four-year terms through secret ballots. Seats are allocated according to the Croatian Parliament's electoral districts: 140 members of the parliament are elected in multi-seat constituencies, 8 from the minorities, and 3 from the Croatian diaspora. The votes for the minorities’ deputies are cast by voters who declare themselves a part of one of the minorities that form roughly a tenth of the population (Serbs, Bosniaks, Italians, Roma, Hungarians, Slovenes, Czechs, and so on). 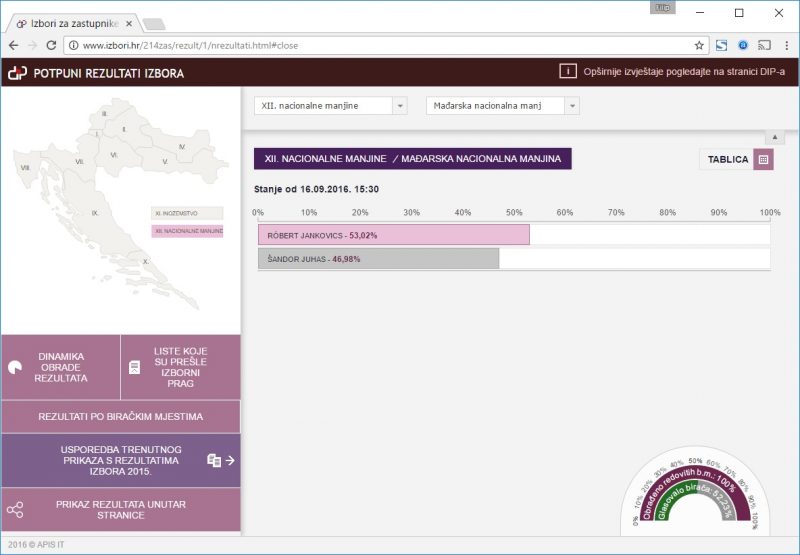 Election results for the parliamentary representative of the Hungarian national minority in Croatia. Screen shot from the State Electoral Commission of the Republic of Croatia.

Preliminary results suggest that Robert Jankovics, who is closely associated with the right-wing HDZ party, defeated incumbent left-leaning deputy Šandor Juhas, who has suggested examining alleged collusion with Hungary's ruling party Fidesz and its government. HDZ and Fidesz are both members of the European People's Party.

The website T-Portal's examination of Croatia's voter registry shows that the number of voters who identified as members of the Hungarian ethnic minority increased by 852 between the regular elections in December 2015 and the early elections in September. This narrow increase in votes by ethnic Hungarian voters affected the slim margin of about 300 votes between the incumbent leftist deputy and his right-wing competitor.

According to reports by the Croatian and regional news media, state institutions, including social services agencies, have preyed on some of the most vulnerable people in the country's eastern rural areas, reportedly pressuring groups to change their ethnic registration.

There have been other forms of voting irregularities, as well. Zorica Blažević, a voter in Kamenac, called the police to report that she was registered as Hungarian even though she is an ethnic Croat:

Besides promising to increase my monthly social benefits, the agitators also threatened me. They said they will take away my home and my son and that we'll have trouble with the police, which intimidated me.

According to various reports, a secret campaign using socio-economic pressures is underway against ethnic Roma. In addition to cash incentives, voters were also enticed with packages containing flour, sugar, shower gels, and chocolates.

Croatia's State Electoral Commission is expected to reveal the election's official results on Monday, September 26. It's unknown if officials will address the allegations described above. Though bribery and blackmail in elections are criminal offenses in Croatia, victims rarely submit official reports to police, due to intimidation.