9 Things to Love About Afghanistan 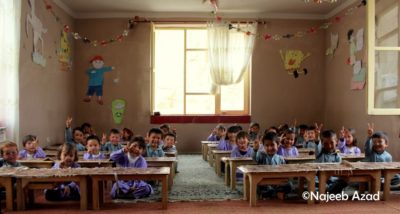 This post is an edited version of a post that appeared first on the author's blog, A New Stone of Hope.

Overseas, the word Afghanistan strikes fear into many people's hearts, while some are quick to conflate it with the Taliban movement that ruled the country from 1996 to 2001 and continues to seek power through arms.

But beyond politics, Afghanistan is a source of great inspiration and resolve for its long-suffering citizens, for a number of reasons.

So, before asking the more frequently posed question of why so many Afghans are prepared to leave the country of their birth, perhaps it would be better to ask why so many stay?

1. It is one of the youngest countries in the world, and children are its pride

Afghanistan is the fifth youngest country in the world, with 68% of its population under 25. This booming demographic creates risks and opportunities. Young people want to grow their stake in the country's development and it is up to older generations to allow them to do that.

With hope, opportunities will be created for youth to serve their conflict-torn developing country, rather than advanced developed countries.

Unfortunately, due to the bad governance of the National Unity Government, unemployment is very high, as are insecurity, corruption, and violence.

While many young people are ensnared by extremist groups, narcotics addiction and poverty, the youth of Afghanistan remains the country's greatest untapped resource, and its only hope for a better future.

Despite a relatively small geographical area, Afghanistan is home to a diverse range of:

Decades of conflict in Afghanistan have provided an opportunity for politicians and outside forces to harness the country's diversity to stir conflict between communities. But diversity remains the core of Afghanistan's national heritage and an inspiration to a great part of the population.

Afghans are reflexively hospitable, serving guests as one of their own with home-cooked food. This is at the root of the proverb “nan wa piyaz, qash waz”, meaning “bread and onion be the food, with happy mood.”

Afghans are patriots, with a rich history of fighting for independence and against foreign invasions.

British and Soviet attempts to bring the country to heel were both repulsed by Afghans.

Although foreign powers also played a role in supporting these anti-imperial insurgencies in Afghanistan, they would not have been possible without Afghans’ overwhelming attachment to their land and hunger for independence.

Today, Afghans are increasingly united against some of the worst acts of terrorism in the world, which have found a home in their country.

The so-called Tabassum Revolution, for instance, was a social movement that erupted in outcry following the brutal beheading of a 9-year-old girl in the country's Zabul province of Afghanistan by militants with apparent affiliations to the radical ISIS group now active in the country.

Afghanistan is still a country where external powers continue to play divide and conquer, but an emboldened civil society, particularly in the capital, is raising its voice against growing violence and insecurity.

This is the new patriotic struggle, which poses challenges to the underperforming government and Taliban alike.

In a 2011 survey by Thomas Reuters Foundation, Afghanistan was identified as the most dangerous place for women to live due to high mortality rates, limited access to doctors and a lack of economic rights.

There have been major achievements along the path to gender equality, however, since the ouster of the Taliban that restricted women's access to work outside the home, restricted their ability to travel without men and made the burqa the indisputable national female dress.

With women in the parliament, and, on rare occasion, behind the wheel of a taxi, things have improved in recent times.

But there is still a long way to go before they are able to guarantee their fundamental rights.

Afghans live their life in the simplest way possible.

Whole Afghan families tend to live in a single house together collectively, unlike in the West where everybody has their own rooms, and the family only gathers during meal hours.

Simplicity for Afghans extends to preferring to sit cross-legged on the floor over chairs, and sleeping on mattresses on the floor rather than beds.

Ambivalence towards luxury has helped the Afghans survive the hardship they have endured over the years, and the basic life is one that many prefer, even if they are wealthy.

For Afghans, the simple home is a sanctuary. The real problems begin outside it.

In 2001, there were no girls formally attending schools in Afghanistan, and only one million boys going to school.

According to the World Bank, a total of 7.8 million children were enrolled in schools as of 2012, including 2.9 million girls. Only a new generation of hard-working intellectually curious Afghans can truly put the country on a path towards development and self-sufficiency.

Afghans are addicted to nan, which is, objectively speaking, one of the world's tastiest forms of bread. One popular meal called Shorba often involves eating nan with nan; shortened nan is soaked in broth and then eaten back with dry nan.

9. Tasty fruit above ground and fantastic mineral wealth below it

More than 80% of Afghanistan’s population depend on agriculture for a living. The country is also rich in gold, copper and other minerals. Unfortunately due to security threats there has been little investment made in Afghanistan's land. According to one study, the value of country’s mineral resources were estimated to be around three trillion US Dollars.

More easily obtained nuggets of the country's vast natural wealth can be found in bazaars across the country. Afghanistan’s Kandahar province has some of the most delicious pomegranates in the world, Bamyan has world-class potatoes, and Kunduz is renowned across the region for its incredible melons. For the fruit alone, Afghanistan is worth a visit!